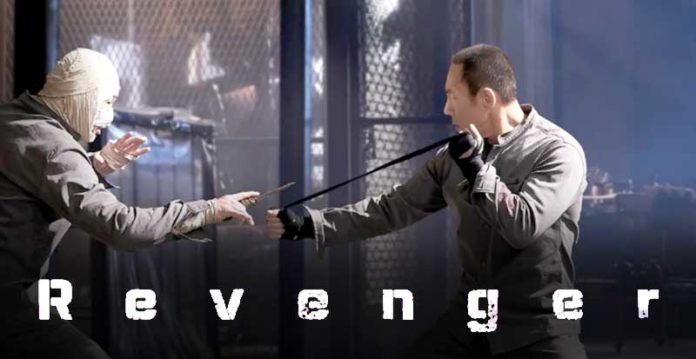 Bruce Khan is a monster. The Hapkido champion, martial artist and stuntman explodes onto the screen in Netflix’s Revenger, a bare bones South Korean brawler harking back to the 70’s. Focusing on a bunch of satisfying hand-to-hand combat and one blistering sword fight.

Plot is meager at best: cop arrives to a prison island to take revenge on the crime lord who killed his family.

There is plenty of action and overall on point, somewhat diluted by a few messy camera work and choppy editing here and there, which draws unnecessary attention to itself. However, it does not take away from the performers and the exciting, visceral choreography.

Especially worth your consideration is the aforementioned two on one sword fight. Intricately choreographed and dynamic, it delivers one of the more rewarding extended weapons fights as of late. With its exaggarated stylization and colorful bad guys, its reminicent of the Rurouni Kenshin trilogy with flashy and amazingly executed manga-in-motion pop showdowns (those were courtesy of action director and frequent Donnie Yen collaborator Kenji Tanigaki). Bruce Khan handling choreography as well as writing duties on Revenger, at least excells at one of them.

Instead of keeping things focused and straight forward with the simple setup, Revenger opts for meandering flatness. Broad comedy and lacklustre development are ill-fitted. There is lots of padding and character beats going nowhere. It comes off as bland and uninvolving. By delegating its only value to its action scenes, Revenger feels more like a showreel than a complete narrative that is drawn out to 100 minutes which makes it overlong, undercooked and dulls most of the enjoyment on the way. But hey, if you are here solely for the action, you are in for quite a treat.