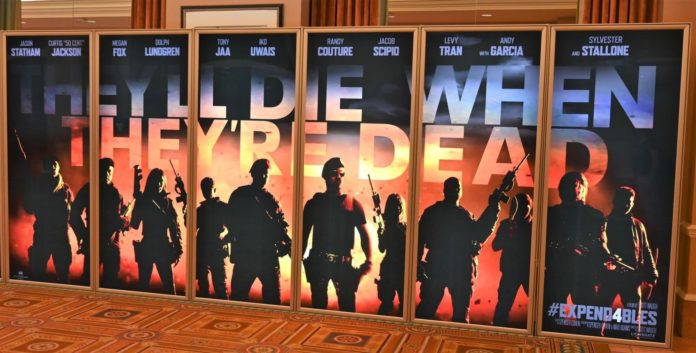 UPDATE: The first Poster for the Expend4bles has been released at CinemaCon (above)!

UPDATE: Take your first look at Jason Statham vs Iko Uwais from The Expendables 4! Statham shared these images from his official Instagram page.

UPDATE: Thai martial arts star Dan Chupong (Born to Fight, Ong Bak 3) has been spotted on the set of The Expendables 4. Tony Jaa posted these images on the set alongside Chupong and Iko Uwais.

UPDATE: Martial arts star Iko Uwais (Snake Eyes, The Raid) is set to play the villain in The Expendables 4. His character is described as a former soldier who has become an arms dealer and has amassed his own private army.

This will be Uwais’ first project with action legends Sylvester Stallone, Dolph Lundgren and Jason Statham. Uwais will also be reuniting with his Triple Threat co-star Tony Jaa.

UPDATE: Check out the first image of Sylvester Stallone and Jason Statham on the set of The Expendables 4 via Statham’s official Instagram!

UPDATE: Three more has joined the cast of the next installment of The Expendables including Sheila Shah (Rambo: Last Blood), Levy Tran (MacGyver) and Jacob Scipio (Bad Boys for Life), who will be playing the son of Antonio Banderas’ character.

Production is currently underway in the UK and will continue to shoot at the company’s Nu Boyana Studios production facility in Bulgaria and Greece.

UPDATE: Veteran actor Andy Garcia is set to reunite with his Wrath of Man co-star Jason Statham in the next installment of The Expendables.

Garcia will play a CIA agent assigned to accompany the Expendables on their dangerous mission.

UPDATE: According to The Hollywood Reporter original franchise stars Sylvester Stallone, Jason Statham, Dolph Lundgren and Randy Couture are officially set to return in the next installment of The Expendables. They will be joined by martial arts superstar Tony Jaa (Monster Hunter), Megan Fox (Rogue) and rapper turned actor 50 Cent (Den of Thieves).

Stuntman-turned-director Scott Waugh (Need for Speed) will direct from a script by Spenser Cohen with revisions by Max Adams and John Joseph Connolly.

“It’s so much fun to bring these stars together for a no-holds-barred action film. The new film will raise the stakes and be the biggest, most badass adventure yet,” said Jason Constantine, president of acquisitions and co-productions for the Lionsgate Motion Picture Group.

UPDATE: The long-awaited 4th installment of The Expendables franchise is finally moving forward, but in a slightly different direction. The film will now be a spin-off titled The Expendables: A Christmas Story focusing on Jason Statham’s character Lee Christmas.

The franchise’s mastermind Sylvester Stallone is said to still be featured in the project, but is taking a backseat for Statham to take over the series.

Reports are saying his presence will be felt “throughout the film,” and his role will be “an emotional one for fans.”

UPDATE: Another original members of The Expendables will not be returning for the 4th installment. Terry Crews, who starred in all three previous films has been dropped from The Expendables 4 by producer Avi Lerner.

While testifying on Tuesday to the Senate Judiciary Committee on the Sexual Assault Survivors’ Bill of Rights regarding his allegations of sexual assault against a Hollywood agent, Crews claimed that by coming forward he has faced retaliation from Hollywood producer Avi Lerner, who was dealing with his own sexual harassment accusation.

Crews stated that Lerner “called my manager and asked him to drop my case in order for me to be in the fourth installment of the movie, and if I didn’t there would be trouble.”

This is very unfortunate and we wish Terry Crews the best.

UPDATE: It seems like there has been a change of heart as Sylvester Stallone has hinted throughout a series of Instagram posts that he WILL be returning to the ‘Expendables’ franchise after all!

Just when you thought it was safe to go outside…They’re coming back!

Looks like another action legend is ‘expendable’. Arnold Schwarzenegger will not be returning for The Expendables 4 if Stallone is not involved.

“There is no ‘Expendables’ without Sly. I would never do the movie without him, no. You know, I think the first and second one were terrific. But, the third one, I thought my part was not written well. It was also not playing well in the movie, as far as I was concerned. Maybe other people believed differently. But I didn’t believe that I had any value in the movie. I love the franchise, by the way. I think it’s a spectacular franchise, The Expendables. I think that Sly has good ideas, what he wants to do with it, and I think if they write a really good script [in] which my part is very well-developed, I would do it. If not, then I won’t do it.”