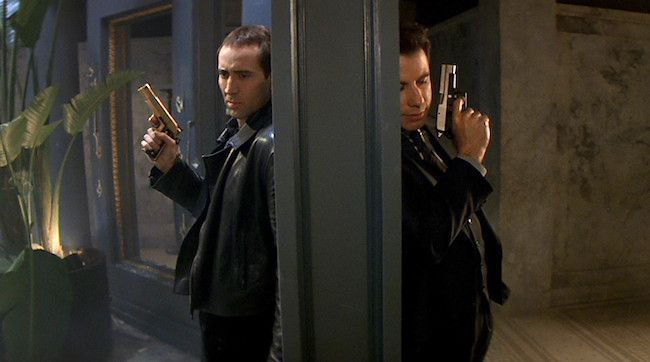 UPDATE: Speaking to Showbiz CheatSheet, director Adam Wingard expressed his desire to bring back both Nicolas Cage and John Travolta for Face/Off 2.

“Some people just assume when I say that that it just means it takes place in the world of Face/Off. To me, Face/Off isn’t about a procedure or anything like that. It’s not about the world that the characters exist in. It’s about Sean Archer and it’s about Castor Troy. That’s what this movie is about. It’s the continuation of that story. It’s hard to talk about other than that but this is, to me, the definitive continuation of that saga. We’re still writing the script so it’s still in early phases. Simon [Barrett] and I are very close to turning in our draft to Paramount soon. We’ll have to get over those hurdles of do they like this movie? They’ve read our outline. Everybody’s on board with it but actually turning in the script’s a different thing so we’ll see how everybody reacts to it. This is a story about Sean Archer and Castor Troy. To stick with that, the story is leading us in a very specific direction,” said Wingard.

UPDATE: Director Adam Wingard confirmed via Instagram that the upcoming Face/Off project is actually a direct sequel and NOT a reboot.

This opens up the possibility of John Travolta’s Sean Archer return.

UPDATE: A director has been found in Adam Wingard (Godzilla vs Kong) for the upcoming re-imagining of Face/Off. Wingard will also write the script alongside his partner Simon Barrett.

The reboot will be produced by Fast & Furious Neal Moritz.