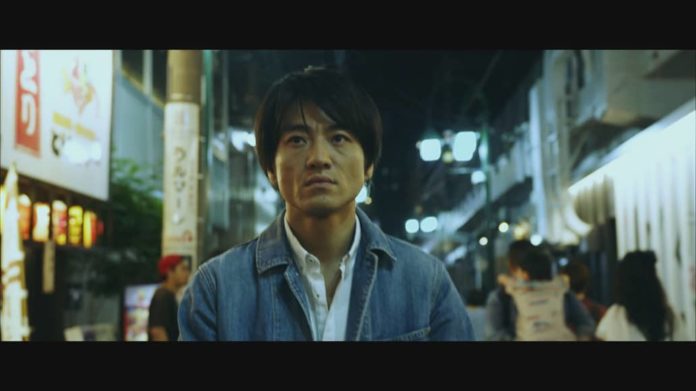 After plying his trade as a stuntman and action choreographer for over a decade, Kensuke Sonomura finally makes his directorial debut with low budget action thriller Hydra. While not wholly successful, it is still a good showcase to show Sonomura’s capabilities behind the camera, especially when working with limited resources.

After opening with a brutal murder scene and its aftermath we then transition to Rina (Mia) who is running her father’s bar Hydra in his absence. Working alongside her is a range of quirky characters as well as the silent Takashi (Masanori Mimoto) who works in the kitchen. It turns out that Takashi has been working there since Rina’s father mysteriously disappeared.

It is clear from the offset that there is more to Takashi than meets the eye. It later turns out that he previously worked as an assassin for a shadowy organisation who attempted to keep Japan safe from possible threats. Of course, like most action thrillers it is not long until his past deeds come back to haunt him and threaten his new life.

Considering Sonomura’s background as a stuntman, he seems to be more interested in setting up the characters and the mood of the film rather than focusing solely action. It may surprise some that Hydra is considerably light on action.

Other than some extremely brief skirmishes, there are only really two main fight sequences, one of which does not even feature the lead. This may disappoint action junkies, but the action on display is still of an extremely high quality being expertly choreographed and suitably brutal. The only drawback is that there is not more of it.

The reason for this could be down to the extremely short shooting schedule, with Sonomura commenting that the whole film was shot in a mere 7 days. Even by low budget standards this is extreme.

The high quality of the action is no surprise, as Sonomura has crafted some highly memorable action scenes throughout his career. Throughout his career he has worked closely with ace action choreographer Yûji Shimomu, collaborating with him on the likes of Death Trance (2005), Alien VS Ninja (2007) and more recently Kingdom (2019).

Although he may be best known for his association with Shimomu, he has been able to branch out on his own, with his work on John Woo’s underrated Manhunt (2017) featuring the best of his recent work as action choreographer.

Working with cinematographer Yasuyuki Suzuki , Shimomura gives the film a nice eighties aesthetic with a heavy use of neon lighting. The synth heavy score contributes to this even further setting it apart from other similarly plotted low budget thrillers.

The score provided by Moko is a terrific accompaniment to the on screen action, being somewhat reminiscent of Vangelis’ work on Blade Runner (1982). This is quite apt as Sonomura has commented in interviews how the sci-fi classic was a major influence on him when he came to direct Hydra.

Admittedly, the character and plot in Hydra is thinly drawn. Jiro Kaneko’s script does allude to a larger conspiracy at foot, as well as giving some of the characters some interesting quirks, but ultimately these do not amount to much. Perhaps with a longer running time there would have been more room for the characters to breath, but at only 77 minutes this really is not a possibility.

Leading man Masanori Mimoto does not exactly get a chance to stretch himself as an actor, with Takashi initially coming across as quite emotionless. As the film progresses we are given more of an insight to his character as, with a lengthy flashback showing how he came to be a trained assassin.

While his role is limited dramatically he does get a good chance to show off his more physical attributes, with his lengthy fight against Naohiro Kawamoto during the finale being the films clear highlight. According to Sonomura this whole fight scene was shot in only 10 hours which is an achievement in itself.

Mimoto has worked under Sonomura on a number of occasions, with him featuring in the previously mentioned Alien VS Ninja as well as in the memorable Bushido Man (2013). According to Sonomura, Hydra was initially Mimoto’s project which he brought to him, enquiring if he would be interested in directing.

The remainder of the cast, made up by the likes of Miu,  Tasuku Nagase and Yoji Tanaka all do well enough but are not given a great deal to work with, with the majority of the film choosing to focus on Takashi and his backstory. The only real standout of the supporting cast is the previously mentioned Kawamoto, who get as much of a chance to shine as Mimoto. Hopefully this will lead to larger roles for the actor.

It is clear the filmmakers may have a sequel planned, as there are a number of plot threads left open. Perhaps the sequel would give the supporting cast more to chew on.

Hydra is perhaps not the action spectacle people were hoping for considering those involved, but it is still an effective small scale thriller with just enough action to keep things exciting. It will be interesting to see where Sonomura goes from here as he shows definite skill behind the camera and a true talent for elaborate fight scenes. It would be great to see what he could achieve with more time and a larger budget at his disposal.