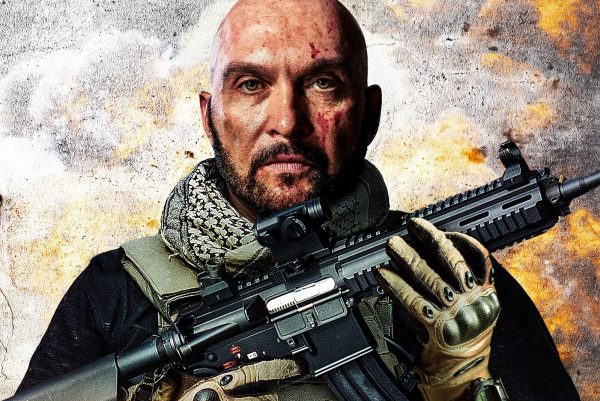 For the past few years, Jesse V. Johnson has become one of the shining lights in action cinema. The likes of Savage Dog (2017), Accident Man (2018) and Triple Threat (2019) all show a director at the top of his game. Although undeservedly relegated to the DTV market, their mixture of quality action scenes and memorable performances put them on par with anything currently on release in cinemas.

With a career primarily as a stunt performer and co-ordinator, Johnson made his first steps toward directing with short film Death Row The Tournament (1998). As well as working as a calling card for his directing skills, it gave him an opportunity to work with ex Legionnaire Dominiquie Vandenberg for the first time. The two had met previously on the set of Mortal Kombat (1995) where Vandenberg featured in a small role.

After their work on Death Row, the two would collaborate on The Doorman (1999), a low budget crime thriller that only gave a small indication of the quality work that was to come from them. The Doorman would later be re-cut and re-released as The Honourable (2002).

It would be another few years until they would collaborate again, this time on the enjoyably violent Pit Fighter (2005). Playing like a throwback to 80’s action movies such as Commando (1985), Pit Fighter was filled with violent action that although clearly made on a low budget never failed to entertained. It also better introduced Vandenberg to a mainstream audience, giving him multiple chances to show off his martial arts skills.

While he has continued to collaborate with Johnson on such films as Alien Agent (2007), Green Street Hooligans 2 (2009) and more recently Triple Threat, Pit Fighter marked the last leading role for Vandenberg.

That is until now. Vandenberg is once again front in centre in The Mercenary, an extremely violent actioner with Jesse V. Johnson once again at the helm. Originally called Legion Maxx, this is a role close to Vandenberg’s heart with him developing the character himself. According to Johnson, it was Vandenberg that brought the project to him, hoping that he would be interested in directing.

Vandenberg plays battle hardened Maxx, a legionnaire turned mercenary. When a disastrous mission in South America leads to Maxx being left for dead he finds himself being nursed back by kindly Priest Father Elias (Carmen Argenziano). By being shown some kindness Maxx ends up gaining a new outlook and realizing that there is a more peaceful way of life.

Of course this peace is short lived, with him coming into contact with his old team of mercenaries, led by the crazed LeClerc (Louis Mandylor). Since Maxx left them they are now employed by a drug cartel to keep the locals in their place. This means anything from intimidation to rape and murder.

While at first Maxx tries to deal with them in a peaceful manner, it is not long until events escalate and Maxx has to return to his violent ways in order to deal with his former teammates.

While The Mercenary was clearly made on a lower budget than some of Johnson’s more recent directorial efforts, he still manages to stretch the budget to its fullest. The film gives the audience exactly what they expect, with it being filled to the brim with exciting action scenes.

As expected, Johnson does not shy away from showing the brutality of violence. One particular fight scene has Vandenberg take on multiple opponents within the confines of a Mosque. I lost count of the amount of stab wounds and gunshots that were inflicted. Next to Savage Dog, this is probably the most violent film to come from Johnson.

Unlike many other DTV efforts, there is hardly any use of poor CGI evident, with only one poorly rendered shot during the opening in Iraq that comes to mind.

Johnson smartly does not over extend his reach, knowing the limitations of his budget as well as playing to the strengths of his leading man. Vandenberg does not exactly stretch himself as an actor, although he does get to show off some emotions as the film progresses.

One other nice touch was that Maxx actually seems to enjoy dishing out punishment. Later in the film LeClerc comments that he secretly enjoys the killing. He may not be wrong as on a number of occasions there is a faint smile that appears across his face after killing one of the mercenaries. This may seem like a little thing but it was enough for me to separate Maxx from the typical movie hero.

Still, when it comes to the action he does not fail to impress. Vandenberg is 100% believable as the unstoppable killing machine. His fighting style is less showy than Johnson’s other regular collaborator Scott Adkins, but this works to The Mercenary’s advantage, with Vandenberg adding a level of authenticity to the fight sequences.

Vandenberg is not the only regular Johnson collaborator to make an appearance. The wonderful Louis Mandylor never fails to disappoint, with him clearly having fun as lead villain LeClerc. Like all the great movie villains, he continuously takes out his stress on his team with some excellent put downs. Mandylor always does excellent work under Johnson’s direction and I look forward to their upcoming Debt Collector 2 (2020).

Any fans of Mandylor should also check out William Kaufman’s The Brave (2019) which has him feature in a rare leading performance.

Carmen Argenziano’s name may not be instantly recognizable to audiences, but his face certainly will. With a career spanning almost 5 decades, he has appeared in some of the most popular television shows of all time with the likes of The Rockford Files (1976), Matlock (1986) and Stargate SG-1 (1997) amongst them.

Argenziano adds some gravits to proceedings, with him trying to be the voice of reason amongst the chaos. Through his guidance, Maxx is able to realise his true purpose.

The remainder of the cast are mostly made up of faceless goons for Vandeberg to take care off, with even his fellow mercenaries not really getting much in the way of character development to define them. This is not a criticism of David Filmore’s script, as I expected this from the outset.

Fight choreography is handled by Malay Kim. While lesser known as a fight choreographer, Kim still fills the film with well realized fight scenes that play to everyone’s strengths. Highlights include the previously mentioned Mosque set fight scene as well as an impressive knife fight duel between Vandenberg and Brad Ashten.

Johnson also employs the talents of Luke LaFontaine to handle the stunt work. LaFontaine is just another in a list of regular collaborators, with them having worked together previously on such classics as Charlie Valentine (2009) and The Beautiful Ones (2017).

Although The Mercenary is not the best to come from Johnson, it still features everything we have come to expect from him, just to a slightly lesser extent. With The Debt Collector 2 still to come, it looks as if 2020 is going to be another great year for Jesse V. Johnson.