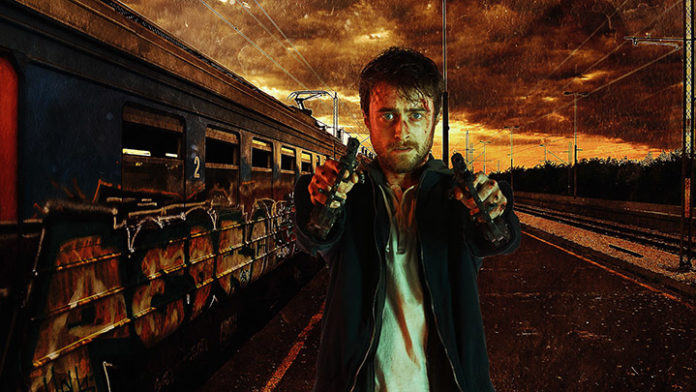 Daniel Radcliffe. Action Hero. Not exactly the first thing that comes to mind when thinking of the former Harry Potter actor, but that is exactly what he is in Jason Lei Howden’s Guns Akimbo, albeit an awkwardly inept one.

It should not come as a surprise that Radcliffe would do something unexpected. His post Potter career has been filled with edgy and out there material, with such films as Swiss Army Man (2016) and Jungle (2017) being major standouts. Guns Akimbo can now be added to that list.

Radcliffe plays Miles, a slightly pathetic video game designer. By day he works at a job he hates, taking abuse from his overly aggressive boss and by night he pines for his ex-girlfriend Nova (Natasha Liu Bordizzo), whilst being a troll online. One night he logs onto a broadcast of Skizm, an illegal death match where contestants fight to the death as it is streamed online. With one too many beers in his system, Miles foolishly decides to leave some antagonising comments on Skizm’s message boards.

Riktor (Ned Dennehy), the mastermind behind Skizm does not take too fondly to Miles’ comments and tracks him down. After being knocked unconscious, Miles awakes to find a gun painfully bolted to each of his hands. Now Miles is the new contestant of Skizm. He will have to learn fast to survive, as his first opponent is reigning champion Nix (Samara Weaving). To make matters worse, Riktor has kidnapped Nova to make sure that he will take part in the game.

Jason Lei Howden had already impressed me a few years back with horror comedy Deathgasm (2015). He certainly does not disappoint with his follow up feature with its mixture of violent action and irreverent humour.

His work here is heavily reminiscent of Neveldine and Taylor’s work on Crank (2006) and Gamer (2009). Having also written the script, he includes some nice jabs at the world of social media and those who hide behind their keyboards.

While Guns Akimbo‘s action scenes are nothing we have not seen before, Howden gives them a sense of pace and urgency with his ever moving camera and video game influenced visuals. While there is some poor CGI employed, Howden keeps things moving at such a frenetic pace you won’t have time to notice.

The best of these both feature Samara Weaving’s Nix, who is the clear scene stealer of the movie. The first has her taking on a warehouse full of drug dealers so she can steal their stash. The second is the blood soaked finale which doesn’t just feature Weaving machine gunning all comers to death but has her going one on one against Mark Rowley, where hammers are the weapons of choice.

With this and her work on the likes of The Babysitter (2017), Mayhem (2017) and Ready or Not (2019), Weaving is fast becoming the go to actress for genre fare. The role of Nix doesn’t exactly have much in the way of character depth but Weaving still makes her a standout, with her many put downs towards Radcliffe being a highlight.

Speaking of Radcliffe, he is perfect as the awkward Miles. Always hiding from his problems, Miles has to man up fast if he is to survive. His performance reminded me somewhat of James McAvoy in Wanted (2008), starting out a coward before having to face his fears. Radcliffe does it in a more humorous manner however, with Miles having to adjust to life without being able to use his hands. Simple things like going to the toilet or getting dressed are serious ordeals.

One of his funniest scenes is between him and Rhys Darby, who plays a suitably eccentric homeless man. He first talks Darby into helping him get dressed before asking him to feed him. Upon Darby’s refusal Radcliffe proceeds to try and eat a hotdog off the ground, with it laying uncomfortably close to a used condom. The scene is equal parts hilarious and gag worthy.

It’s not all laughs, with Radcliffe throwing himself into the action. At no point does Miles come across as your typical action hero, always seeming to survive just by the skin of his teeth. It’s just another in a line of great performances from Radcliffe.

Ned Dennehy is on villain duties as the demented Riktor. He does not disappoint in a scenery chewing performance filled with some terrific dialogue. He does go way over the top but that only adds to the overall film. It’s nice to see Dennehy getting more substantial roles as he has proved himself to be a solid supporting actor in the likes of Peaky Blinders (2013) and Mandy (2018).

It was also nice to see Grant Bowler from SyFy’s Defiance (2013) show up, even if it was only for a limited time.

Only Natasha Liu Bordizzo draws the short straw, with her character Nova being the typical woman in peril that is prevalent in so many action movies.

Enis Rothoff contributes a nice musical score that is a fine accompaniment to the on screen action. Howden’s choice of songs also sets Guns Akimbo apart. Any film that uses Stan Bush’s Never Surrender from Kickboxer (1989) gets points in my book.

Guns Akimbo may not be to everyone’s taste but I got a real kick out of its excessive violence and black humour. It should do well with those who are growing tired of the constant PG-13 actioners that fill cinemas these days.