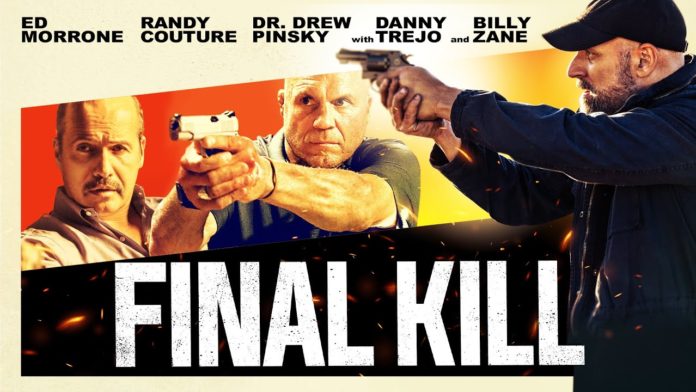 Originally called The Protector, Final Kill focuses on aging protection specialist Mickey Rome (Ed Morrone) who works for his friend Carl (Billy Zane). Enticed to take on one last job, Mickey travels to Central America where he must protect a couple from a deadly crime family. As expected things don’t go to plan with Mickey having to fight off a team of mafia hitmen baying for the couples blood. It isn’t long until Mickey realizes the threat might be closer to home.

Before viewing a VOD release there are clear signs to look out for to determine the quality of what you’re about to see. If it’s directed by a William Kaufman, Jesse V. Johnson or Issac Florentine, it’s a safe bet to say you’ll be in for a treat.

Likewise if it stars the likes of Jean Claude Van Damme, Scott Adkins or Michael Jai White, you know you will at least be treated to some excellent action performed by actors that actually seem to care about the end product.

Justin Lee is relatively new to the film scene, directing his first full length feature in 2018. Big Legend (2018) was seriously compromised by it’s clear lack of finances but at least showed Lee’s potential behind the camera.

He followed Big Legend up with a handful of movies, the best of these being Any Bullet Will Do (2018) and a Reckoning (2018). Both films were ambitious but ultimately flawed takes on the Western genre, once again let down by their clear low budgets. Still both films were a step in the right direction for the director and showed that he was improving with each feature.

Because of these I was quite interested in how Lee would fare with his most recent venture. Sadly, Final Kill is somewhat of a step back for Lee, with lacklustre action scenes and some surprisingly poor camera work.

The action for the most part fails to generate any excitement, which is a major failing in any actioner. The shootouts and fight scenes are generally few and far between and when they do occur they are over in minutes. In addition, they include my own personal peeve, the dreaded digital gunfire added in post.

The only real standout action scene for me was a fight between Marrone and a female assassin which is suitably brutal, with the two of them using whatever is lying around as a weapon, be it a frying pan, a vase or at one point a fridge.

In terms of the visuals, it was clearly shot on digital like so many low budget productions these days. For the most part, director of photography Logan Fulton is able to overcome the drawbacks of the low budget, gifting the audience with some nice shots of the beautiful locations. Still, there are a number of poorly handled scenes.

For example, there is a dialogue scene between Morrone and Anita Leeman Torres alongside a swimming pool that slowly pans in and out of the actors. It repeats this throughout the entire scene to the point of distraction.

Many viewers may be able to overlook such minor drawbacks but they began to be too much as the film progressed, with one too many scenes featuring camera judders and the like. Of course in a larger budget production these scenes could be reshoots, but unfortunately Lee doesn’t have that luxury. It’s a shame as little things like this can make or break a film.

As well as directing, Lee also wrote and produced Final Kill. The script is one area that actually works in the film’s favour and stops the film from being a failure. There’s enough well written dialogue and quirky character moments peppered throughout to keep things interesting.

Lee tries to break up the story by including a series of flashbacks. As well as helping to pad the film out that give the audience more background on Marrone’s character.

Still, the plot elements barely stretch to a complete film with the entire running time being only 80 minutes. Considering this, I was really surprised when the final credits rolled at the 73 minute mark, with the rest of the time being filled by outtakes.

The majority of Lee’s work has featured actor Kevin Makely in a lead role. Makely doesn’t feature this time however, with the lead this time being Ed Morrone.

Like Makely, Morrone is mostly unknown, with the majority of his work being small supporting roles. He is probably the best thing Final Kill has going for it. He has a great time as the highly strung Mickey. Mickey isn’t exactly the most likeable of protagonists but Marrone does extremely well to at least make Mickey relatable.

He doesn’t come across as the super human action hero of most actioners. Even when the action occurs, Marrone takes as much of a beating as he gives out.

Some may find his character too much but I got a real kick out of his performance and hope this leads to more work for Marrone in the future. He does have the upcoming Hellblazers, once again directed by Justin Lee where he will be sharing the screen with Bruce Dern as well as many of Final Kill‘s supporting cast.

By casting a relative unknown in the lead, Lee has smartly realized there’s a clear need to fill out the supporting cast with a variety of recognizable stars. This is something he has done in the past with screen legends like Lance Henriksen and Bruce Dern being used to elevate his productions.

This time around he has a host of notable B movie stars, with Billy Zane, Johnny Messner and Randy Couture being just a few members of the main supporting cast. Unsurprisingly their screen time is limited, only appearing in a handful of scenes.

Zane at least has some fun and still shows he has the charisma he used to great effect all those years back in Dead Calm (1989). Messner gets slightly more screen time as the shady Pauly, who you just know is up to no good.

Randy Couture is mostly wasted, with his screen time amounting to a few minutes. Criminally he doesn’t even get a chance to show off his fighting skills.

Still, a few minutes is still better than some of the other cast members, such as James Russo and Danny Trejo. Even though his name is prominent in the credits and promotional material, Trejo’s appearance literally amounts to about 30 seconds of screen time.

The strangest piece of casting however has to be Dr. Drew Pinsky. To be honest, I was completely unaware of who Pinsky was. Upon looking him up I realize that he is mostly playing himself. It seems as if the part was specifically written for him. He does fine considering he isn’t really an actor. Be sure to wait around to the end of the credits as there’s quite a funny scene between him and Marrone.

It’s a shame that Final Kill is less the sum of its parts as there are certainly enjoyable aspects, most notably Marrone’s enjoyable performance. I would recommend viewers to lower their expectations before viewing and they should at least get some enjoyment.

Final Kill is set for release on Blu-ray and DVD April 14th.