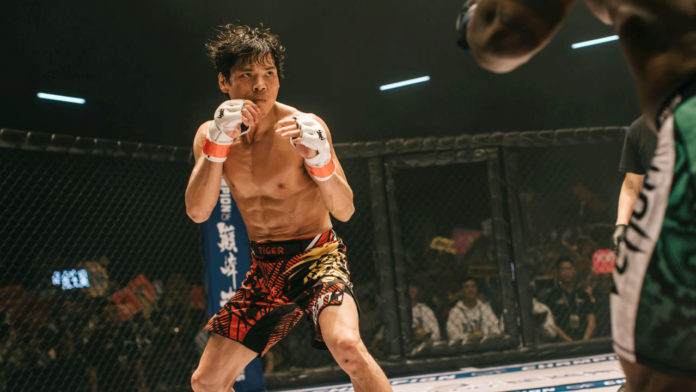 After failing to set the box office alight upon its release in China last year, Johnnie To’s Chasing Dream will hopefully fare better Stateside with it now playing as part of the Fantasia 2020 film festival.

Marking his first film as director since Three (2016), Chasing Dream is quite a different ride from what one would normally expect from a Johnnie To movie. Perhaps it was these expectations that led to it’s being poorly received.

Those expecting a crime thriller in the mould of previous To movies like Election (2005) or Exiled (2006) will sadly be disappointed. Chasing Dream finds To in a more playful mood, harkening back to the more populist fare he made back in the 90’s.

Jacky Heung stars as Tiger, an upcoming MMA fighter on a television show Ultimate Showdown. Through the show he comes into contact with Cuckoo (Keru Wang) who is working as a ring girl. As well as being a fighter, Tiger also moonlights as a debt collector whose boss Cuckoo owes a lot of money to.

After Tiger brings Cuckoo to his boss it is decided that she will work to pay off her debts. Initially Cuckoo is terrified thinking that she will have to work as a prostitute or in pornography to pay off the debt. Instead Tiger just wants her to carry out odd jobs for him such as working at a car wash and helping with a film shoot.

The situation isn’t perfect for her, with her forced to move in with Tiger, where she is essentially kept a prisoner. Even then, a bond starts to form between the two. It turns out that Tiger really wants to leave MMA and debt collection behind and open a restaurant, whereas Cuckoo wants to take part in a talent contest called Perfect Diva.

She has her own reasons for wanting to enter which become apparent the more Tiger gets to know her. Many obstacles are put in their way and we have to keep watching to see if the two will be able to reach their dreams.

While To is probably best known in the West for his crime thrillers, we shouldn’t forget that he has dabbled in many genres throughout his career, be it drama, comedy, martial arts or fantasy.

For Chasing Dream he has actually decided to combine all four of these, with even musical thrown in for good measure. All these elements make for a colourful and exuberant tale that while not prime Johnnie To, is still proof that the veteran director hasn’t lost his touch, directing with the style and verve of someone half his age.

With its mix of over the top acting and musical montages this is more in line with To’s work on The Royal Scoundrel (1991) or Love On A Diet (2001) than anything he has directed recently.

In regards to plot, the film includes all the cliché’s we have come to expect in a sports drama. We get the typical underdog who is told never to box again or he could risk permanent damage. There is also the inclusion of an uneasy relationship between Tiger and his former trainer (Shao Bing) ala Rocky (1976).

The predictable nature of the story doesn’t get in the way of being able to enjoy the film. In a matter of fact, this is one of the reasons boxing films are so popular. It’s more to do with the execution than the actual story, and this is where To excels.

The entirety of the film doesn’t focus solely on the boxing element, with Cuckoo’s story of trying to become a pop star is given its own share of screen time and is as important to the film. In many ways these parts of the film are what sets Chasing Dream apart from the norm, with To able to include a fair amount of satirical digs at the world of talent contests and the extremes people will go to in order to become a star.

Some of the most memorable scenes in the film focus on this area of the film. One standout sequence has Heung hurriedly escorting Wang from audition to audition across the city with minutes to spare, with each audition being worse than the last. One of the films funniest inclusions is one if the contestants on Perfect Diva who shows up to each show with yet another injury, be it broken legs or a shattered hip. It becomes a running joke to see what injury she will have next. What makes it funnier is that every time she exclaims that it’s “worth it”.

With all this in mind you have probably realized that Chasing Dream isn’t exactly the most realistic of films. To sets his film in a kind of hyper reality. While the action can be hard hitting, many things happen that just wouldn’t be allowed in real life. This is the type of film where MMA fighters willingly kill their opponents and are allowed to compete the following week, or where contestants on a talent contest are blackmailed.

Also, Rocky never had any of its characters breaking into a well-choreographed musical number like they do here. Now I’m not saying this is what Sylvester Stallone should be doing in the next Creed film, but it would certainly make the new entry stand out from the rest. Saying this, if his singing in Rhinestone (1984) is anything to go by, maybe this isn’t the best idea.

Not all the credit should go to To for these many out there inclusions. Like the majority of his best work, To has regular collaborator Wa Ka-fai on producing duties as well as working on the screenplay along with Mak Tin-shu and Angus Chan.

Martial arts fans may be slightly disappointed that this isn’t an out and out fight fest, but there are enough fight scenes peppered throughout to keep them entertained with Jack Wong’s energetic fight choreography putting leading man Jacky Heung through his paces.

Speaking of Heung, this is his first leading role since the disappointing League of Gods (2016) and is certainly a better fit for the actor. He is guilty of going a bit over board in the histrionics but this is completely in line with the tone of the film. As mentioned, he certainly gets to show off his physicality in the number of fight scenes he is involved in, with Heung acrobatically throwing his body around the ring.

Keru Wang more than matches him as Cuckoo, with her being the heart and soul of the film. Considering this is only her second film, she is terrific, giving a lively and engaging performance and stealing nearly every scene from Heung.

Initially I was disappointed that Johnnie To’s first film in three years wouldn’t be a return to the crime genre but I have to say that Chasing Dream is more than I could have asked for, with its mixture of drama, comedy, action and musical numbers unlike anything else that is playing at Fantasia 2020. While I look forward to To’s return to crime, this will certainly do in the meantime.