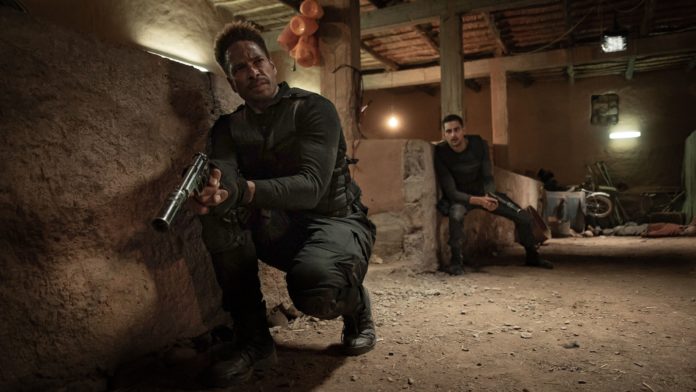 Soon to be released by Saban Films, Redemption Day marks the feature length directorial debut of Hicham Hajji. The main plot focuses on army veteran Brad Paxton (Gary Dourdan), who we are first introduced to during a mission in Afghanistan. After the failure of the mission he returns stateside to live a quiet life with his wife Kate (Serinda Swan) and daughter Clair (Lilia Hajji).

Struggling with a serious case of PTSD, it isn’t long until Brad has to fall back on his military training, with his wife being kidnapped in Morocco during an archeological expedition.

Teaming up with old friend and colleague Younes (Brice Bexter), Brad has three days to find his wife before she is beheaded on live television by feared terrorist leader Jaafar El Hadi (Sami Naceri). Obstacles in his way C.I.A. agent Tom Fitzgeralkd (Martin Donavan) as well as American Ambassador Williams (Andy Garcia) who empathises with Kate’s plight but at the same time has to weigh up the legal implications of giving Brad free reign to track her down.

The poster for Redemption Day is the perfect example of misleading promotion. Filled with helicopters, gun toting characters etc, it incorrectly gives the viewer expectations that they will be in for an action packed night at the movies.

Now this isn’t exactly a new practice. Many DTV actioners have had similar marketing campaigns. Many Steven Seagal or Scott Adkins movies feature our lead in the foreground whilst all manner of chaos is happening behind them. For the most part this said chaos is absent from the film being promoted. Still, these films would still be classed as action movies, with there still being enough fight scenes and shootouts to satiate genre fans.

The same can’t be levied at Redemption Day. What little action there is appears in the final third of the film where Dourdan’s character attempts to rescue his wife. Up until then we are treated to a slow moving thriller/drama, where Dourdan and his colleague have to cut through a lot of red tape to try and track down his wife’s whereabouts.

Considering they are all working against the clock, no one actually seems in a great rush to find Kate. Director Hajj doesn’t exactly build the required tension and even with a relatively short running time, the plot drags. The script does add some topical elements around America and its acquisition of oil but doesn’t get into enough detail for this to feel more like an afterthought to make the plot seem more relevant.

Additionally there are some small character touches that slightly distinguish the characters from the norm, but similarly to the plot these aren’t developed enough to generate much interest.

Dourdan’s character is shown to be suffering from PTSD, with Hajji continually cutting back to what happened to Brad in Afghanistan. I expected that after numerous flashbacks to his ambush that we would finally be shown the outcome, but as we gear up for the finale this story thread is seemingly forgotten about.

Perhaps this explanation was being left for a potential sequel, as the film alludes to this possibility during its closing moments. Unfortunately I can’t see this happening as Redemption Day doesn’t hold enough interest to warrant any type of a follow up.

The action when it arrives is capably handled by Hajji but pales in comparison to some of the excellent action sequences to appear in more recent DTV movies.

Perhaps I shouldn’t be so overly critical considering that this is Hajji’s first full length feature, as it is clear he was working with limited funds. He does get some things right.

The opening sequence in Afghanistan manages to impress, with Hajji shooting its entirety in one long take. Only the poor CGI employed let’s this down. If Hajji was to fill his film with other such impressive sequences he could have been on to a winner. Sadly this was not to be. To be fair, the film isn’t a complete dud, but with the cast involved I did expect more.

Speaking of the cast, it is given a level of gravitas by the appearance of screen legends Andy Garcia and Ernie Hudson, although this is nowhere close to being their best work. In comparison to main actor Gary Dourdan, their screen time is relatively brief, with this being Dourdan’s show all the way.

In regards to Dourdan he makes for a relatively decent lead, handling what little action there is with considerable skill. Dourdan has had his fair share of personal problems in the past but I have always felt him to be an engaging performer going back to his roles in Alien Resurrection (1997) and the television series.

He is probably most well known to audiences for his supporting role in hit show C.S.I. and although lead roles have been somewhat sparse of late, it is good to see him back on screen even if it is ultimately in a disappointing film like Redemption Day.

Serinda Swan gets little to day other than looking scared at her predicament. Still, she performs her scenes well enough.

Dourdan isn’t the only actor in the cast to have some personal issues get in the way of his work. Main bad guy Sami Narceri has become as famous for the Taxi (1998) series as he has for his brushes with the law. It’s good to see he has managed to turn his life around, as while his role here is mostly a waste of his talents it’s still good to see him on screen.

Continuing the pattern of cast members with personal issues, Prison Break (2005) fans should also keep their eyes open for the underrated Robert Knepoer who shows up briefly in a cameo role. It would seem that his role was meant more of a teaser in the event of the aforementioned sequel as his character has no bearing on the main plot.

I feel that I may have appreciated Redemption Day more if I had lowered expectations. In the past it used to be the norm for a DTV action movie failing to impress. But as time has gone on the DTV/VOD market has become a treasure trove of quality action cinema, with the work of Jesse V. Johnson, Steven C. Miller and William Kaufman to name a few being excellent examples of what is on offer. Sadly the likes of Redemption Day just can’t measure up.