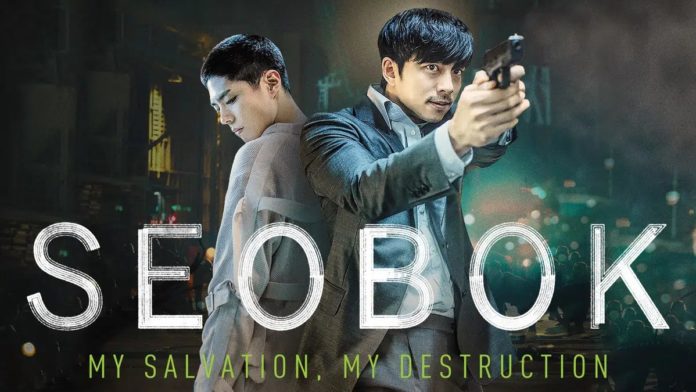 Released in South Korea last year under its original title, Seobok: Project Clone comes courtesy once again of the good people of Well Go USA, with it containing the requisite action and drama that features heavily in their back catalogue. While not a complete success, Seobok still contains enough interesting themes and bang for your buck to keep most audiences entertained.

With his health failing, ex intelligence agency agent Min Gi-heon (Gong Yoo) is given the difficult task of transporting across the country the world’s first clone Seo Bok (Park Bo-gum). With Seo Bok apparently holding the secrets to eternal life, Gi-heon is promised that he is the key required to save him and stop the tumor that is quickly killing him.

Of course, holding the secrets to eternal life makes Seo Bok extremely valuable, with various agencies trying to capture him to fill their own agendas. Gi-heon has to put his training to use in order for him and Seo Bok to survive, however, Seo Bok has some hidden talents of his own that may come in worthwhile.

As the two travel together they begin to get a better understanding of each other with them creating a genuine bond. The question is, when the time comes to hand Seo Bok over will Gi-heon be able to?

Seobok marks writer/director Lee Yong-ju’s first film since Architecture 101 (2012), being quite a change of pace from that film. While it still has a strong focus on quality performances, Seobok moves away from the romantic drama of his previous venture moving into sci-fi thriller territory.

Yong-ju’s script incorporates themes around what makes us human, identity and death but Yong-ju is careful not to get bogged down with these elements, thankfully keeping the pseudo intellectual dialogue to a minimum. Seobok ultimately boils down to a straightforward chase thriller, but has enough interesting inclusions to set it apart from other similar fare.

The sci-fi elements are of course far-fetched but are mostly dealt with a straight face. In fact, everything in Seobok is dealt with in this manner. There is very little in the way of levity, with the entirety of the film being somewhat solemn and does become overly serious. Still, this is mostly fitting with the story being told.

With the subject matter it wouldn’t make sense for there to be something of a comedic element or even lighter scenes, however Seobok is guilty of getting overly melodramatic in places. No matter how tough the lead characters appear to be, there are numerous scenes where they break down in tears.

This isn’t exactly new with South Korean cinema, and to be honest is expected. Most of their characters wear their hearts on their sleeves and never seem fearful of showing their emotions. This just seems to be the norm, and being a lover of South Korean cinema I would probably be disappointed if this didn’t happen.

The idea of a fully grown clone, especially one with supernatural powers is quite frankly ridiculous, but Yong-ju makes everything seem at least palatable with the real world setting playing a part. This isn’t some kind of futuristic dystopia the plot takes place in but modern day South Korea, which helps ground the film in some form of reality.

Yong-ju handles the sci-fi and action aspects considerably well considering this is his first action movie. Sure the action isn’t groundbreaking but they are reasonably well staged, featuring a mixture of realistically grounded fight scenes and shootouts mixed with more fantastical elements which are gradually introduced as the film progresses.

Although there wasn’t as much action as I had anticipated, the handful of action scenes are suitably violent, with the inclusion of the CGI being better realized than expected. While not Hollywood quality, the CGI is integrated well and doesn’t detract from the overall quality of the film.

With the action not being the focal point of the film, Yong-ju is able to fall back on his previous experience, getting fine dramatic performances from his cast. It helps that he has a quality cast headlined by Gong Yoo and Park Bo-gum.

With the majority of the film being focused on the relationship between the two, it helps that the actors work well together and share a degree of chemistry. Gong Yoo does especially well as the cold hearted agent, willing to do whatever it takes to save his own life before he finds his heart begin to thaw the longer he spends time with Seo Bok and see’s he is more than just an experiment.

Yoo is no stranger to action movies, with him probably being most famous in the West for the hugely successful Train to Busan (2016). This last year has been especially prolific for the actor with him appearing in Netflix’s cultural phenomena Squid Game (2021) as well as the recent The Silent Sea (2021).

Personally, my favourite of his is the Jason Bourne-like The Suspect (2013), which shows his action skills off to their fullest. None of the set-pieces in Seobok matches the quality of The Suspect, but Gong Yoo still gets in his fair share of enjoyably violent skirmishes to keep action fans happy.

As the titular Seo Bok, Park Bo-gum perfectly conveys his character’s seeming confusion with the outside world, with Seo Bok having an almost alien-like quality. As he progresses you begin to recognize that he is more “human” than those who want to capture him. I was less aware of Bo-gum as an actor, with the majority of his acting work featuring on television. Perhaps his quality work here will lead to more movie roles in the future.

Of the supporting cast, Jang Young-nam is a standout as the conflicted Dr. Im Se-Eun. Her reasons for being involved in the experiment are more personal than those she works for, with her having a real emotional connection with Seo Bok. He isn’t just a weapon to her and Young-nam gets a good chance to show off her acting range in what would otherwise be a throwaway role.

Seobok: Project Clone isn’t the best example of South Korean cinema, but it is still an engaging enough actioner that should please less discerning viewers. It is certainly better than some bigger budgeted Hollywood fare to have been released in the past year, and certainly a better sci-fi action movie than the likes of The Matrix Resurrections (2021).