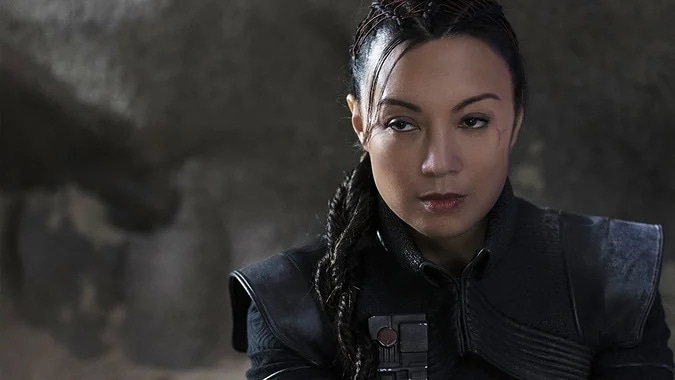 UPDATE: Check out the first look at Ming-Na Wen’s character Fennec Shand in the Trailer below!

According to Vanity Fair, the character is an assassin who “made her name committing murder for the galaxy’s top crime syndicates and crosses paths with Pedro Pascal’s masked bounty hunter midway through the first season.”

UPDATE: See the latest Trailer below!

The Mandalorian premieres November 12th only on Disney+.

It was also announced at the D23 Expo that Ming-Na Wen (Marvel’s Agents Of S.H.I.E.L.D) has joined the cast.

UPDATE: Check out The Mandalorian panel at the recent Star Wars Celebration event!

Pascal’s title character is said to be modeled after iconic bounty hunters Jango and Boba Fett from the original trilogies. The lone bounty hunter travels the outer reaches of the galaxy, far away from the laws of the New Republic. Carano’s Cara Dune is an ex-Rebel Shock Trooper and Weathers’ Greef Carga is the head of a guild of bounty hunters.

Look out for The Mandalorian to premiere on November 12, 2019 only on Disney+ streaming service.

The series is set between “A New Hope” and “The Force Awakens,” sometime after the fall of the Empire and before the rise of the First Order.

Former MMA champion GINA CARANO (Deadpool, Fast & Furious 6) is taking her talents to “a galaxy far, far away” as she has joined the cast of THE MANDALORIAN, a ‘Star Wars’ series produced by Jon Favreau (Iron Man), Kathleen Kennedy (Star Wars: The Last Jedi), Colin Wilson and Dave Filoni.

The series takes place “after the stories of Jango and Boba Fett, another warrior emerges in the Star Wars universe. The Mandalorian is set after the fall of the Empire and before the emergence of the First Order. We follow the travails of a lone gunfighter in the outer reaches of the galaxy far from the authority of the New Republic.”

Look for ‘The Mandalorian’ is debut on Disney’s upcoming streaming service Disney+ sometime next year.