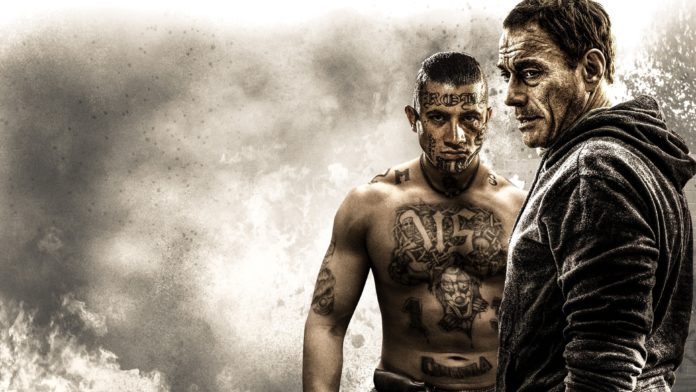 After his stellar work in The Bouncer (2018), Jean-Claude Van Damme returns with We Die Young (2019), another small scale feature that focuses more on his dramatic skills than his martial arts.

Set in Washington DC, We Die Young is told from the viewpoint of Lucas (Elijah Rodriguez) a teenage drug courier who works for local gang leader Rincon (David Castaneda). He takes care of his younger brother Miguel (Nicholas Sean Johnny) who he understandably does not want to follow the same path as him. Unfortunately the gang have other ideas and it is not long before Lucas and Miguel are on the wrong side of them.

Thankfully local mechanic Daniel (Jean-Claude Van Damme) comes to their rescue, becoming their guardian angel, albeit an extremely damaged one. Daniel is a war veteran who was badly injured whilst stationed in Afghanistan. Suffering from PTSD, his injury has resulted in him not only losing his voice but becoming addicted to drugs, which Lucas delivers to him.

Through helping Lucas and Miguel, Daniel becomes a target for the gang with those he cares for paying the price. This eventually leads to Daniel facing off against insurmountable odds by taking on the gang by himself.

After a number of years of working in television and making a number of documentaries, We Die Young marks director Lior Geller’s first full length feature. Geller is in the Guinness Book of records for winning the most amount of awards for a short movie. This was for short film Roads (2007).

He uses Roads as the foundation for We Die Young, with both of them focusing on a damaged ex-soldier coming to a young boy’s rescue. He has changed the location but the basic plot is the same.

Geller does well with his first feature, getting good performances from his cast, handling the action well and keeping the plot moving at a quick pace. However there are some drawbacks.

He does implement an overuse of shaky-cam throughout the majority of the film, although this does add a sense of immediacy during the action scenes. It also helps cover up the limited budget, particularly obscuring the use of poor CGI blood in the more violent sequences.

In addition to directing, Geller wrote and edited We Die Young. The script is slightly lacking in regards to some of the characters. Fortunately the performers are able to rise above this, giving their characters more depth that is on the written page.

Like a number of Van Damme films, the majority of We Die Young was shot in Bulgaria with only a small fraction being shot in Washington D.C. The filmmakers do a decent job of making the streets look authentic, but as I have never been to Washington DC, I can not attest to how convincing they are.

Van Damme fans may be disappointed that this is a more dramatic outing for the actor, but should be thankful that he is still willing to take risks. One of the hardest working action stars today, he has proven countless times that he has actual acting ability with his excellent work in JCVD (2008) and the previously mentioned The Bouncer being clear standouts.

While not in the same league as those performances, Van Damme is still terrific in his role. With the fact he is unable to talk only adding to his performance, relying more on body language and facial expressions to get his message across.

The only drawback to his role is that even though he is given top billing, he is essentially a supporting character with young Elijah Rodriguez being the lead. Even with this in mind, Van Damme still has ample screen time to satisfy his fans.

Considering his young age, Elijah Rodriguez does extremely well. His character does not make the mistake of some child performers of being overly annoying as Lucas appears older than his years and being instantly like-able. He had already shown his potential in Sicario: Day of the Soldado (2018) and should only get better with age.

David Castañeda as gang leader Rincon probably gives the best performance of the supporting cast. Brutally violent, he is still shown to be a loving family man with a clear fondness for Lucas. Even when he finally confronts Lucas he seems to be conflicted.

Like Elijah Rodriguez, Castañeda also had a supporting role in Sicario: Day of the Soldado. Hopefully his work here and his supporting role in the newly released Netflix show The Umbrella Academy (2019) will open him up to a new audience.

The rest of the supporting cast including Charlie MacGechan, Joana Metrass and Nicholas Sean Johnny put in decent work but are overshadowed by Van Damme, Rodriguez and Castañeda.

More of a thriller than an action movie, with there only being two main action scenes throughout, one of which is an exciting chase sequence and the other being a violent shootout. Thankfully Van Damme is involved in both. The only other scene that could perhaps be considered action are brief flashes back to Daniel’s time in Afghanistan.

In terms of martial arts, there is only one small fight scene during the bullet riddled finale with Van Damme taking on two gang members. It is relatively brief with only a few punches and kicks thrown but is in line with the realistic approach the film takes.

Whilst not in the same league as some of Van Damme’s other DTV movies, it is still a worthwhile action thriller, especially for those that like a bit more drama with their action.