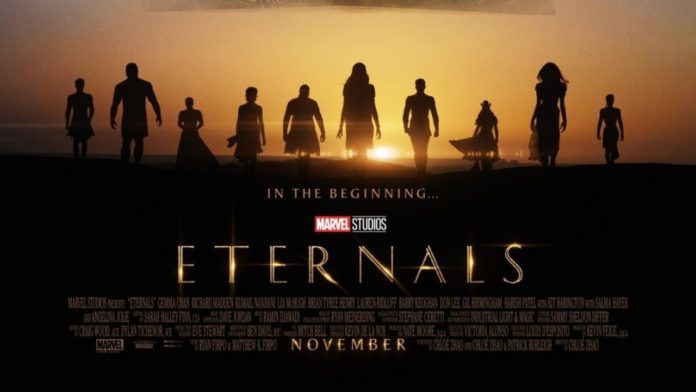 UPDATE: Marvel Studios has release a sizzle reel for Phase 4 of the MCU featuring our first look at Eternals!

Eternals is set to hit theaters on November 5th.

UPDATE: Marvel has released the official synopsis for The Eternals:

Marvel Studios’ The Eternals features an exciting new team of Super Heroes in the Marvel Cinematic Universe, ancient aliens who have been living on Earth in secret for thousands of years. Following the events of Avengers: Endgame, an unexpected tragedy forces them out of the shadows to reunite against mankind’s most ancient enemy, The Deviants.

The outstanding ensemble cast include Richard Madden as the all-powerful Ikaris, Gemma Chan as humankind-loving Sersi, Kumail Nanjiani as the cosmic-powered Kingo, Lauren Ridloff as the super-fast Makkari, Brian Tyree Henry as the intelligent inventor Phastos, Salma Hayak as the wise and spiritual leader Ajak, Lia McHugh as the eternally young, old-coul Sprite, Don Lee as the powerful Gilgamesh, Barry Keoghan as the aloof longer Druig, and Angelina Jolie as the fierce warrior Thena. Kit Harrington was cast as Dane Whitman.

UPDATE: The full cast appeared at Disney’s D23 Expo with the announcement that Game Of Thrones‘ Kit Harington and Gemma Chan (Captain Marvel, Crazy Rich Asian) has joined the cast as Black Knight and Sersi.

UPDATE: The cast of The Eternals showed up on stage at San Diego Comic Con confirming the line-up of: Richard Madden as Ikaris, Kumail Nanjiani as Kingo,  Lauren Ridloff as Makkari, Brian Tyree Henry as Phastos, Salma Hayek as Ajak, Lia McHugh as Sprite, Don Lee as Gilgamesh and Angelina Jolie as Thena.

Directed by Chloé Zhao, the film is set to debut in theaters on November 6, 2020.

UPDATE: John Wick himself may be joining the Marvel Cinematic Universe. Keanu Reeves (The Matrix) is reportedly being eyed for a role in The Eternals. There is no officially deal yet in place, but Reeves is definitely on Marvel’s radar.

It is rumored that the role may be for the villain ‘Druig’, a character introduced in the pages of Eternals #11 in 1977. His powers consist of manipulating matter and energy and served as an agent of the KGB, which could give this film a big link to Black Widow.

The Eternals was created by Jack Kirby in 1976 which follows a race of ancient human beings created a million years ago by the cosmic entities known as the Celestials. The Celestials is known to have masterminded the evolution of a group of subjects and gave them the genetics to mentally manipulate limited quantities of cosmic energy, as well as other superhuman traits.

Central to the story will be the female Eternal known as Sersi, a role that Jolie is currently in talks to take on.

The film will be directed by Chloe Zhao (The Rider) with Matthew and Ryan Firpo (Ruin) are writing the script. Marvel Studios head honcho Kevin Feige is producing.