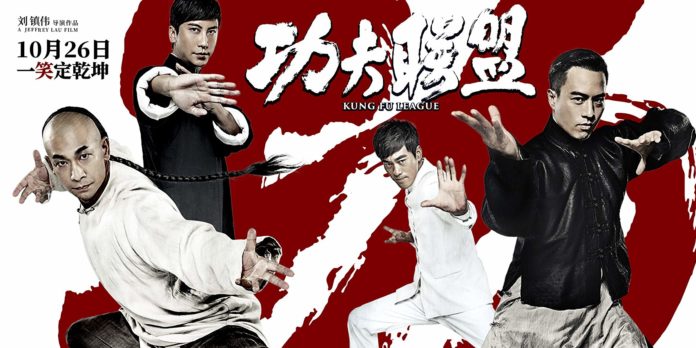 Instead of concentrating on our martial arts heroes, Lau has made the unwise decision of focusing the plot on the romantic exploits of Fei Yingxiong (Ashin Shu), a geeky comic book artist who pines hopelessly over colleague Bao Er (Madina Mamet). His boss Zhang Peng (Zhang Ziwen) also has a thing for Bao’er, and does his hardest to keep the two apart. After being humiliated in front of Bao’er and his other work colleagues, Yingxiong makes a wish that his martial arts heroes will come and assist him to win the love of Bao’er.

Surprisingly, his wish comes true, with Wong Fei Hung (Vincent Zhao), Huo Yuan Jia (Andy On), Ip Man (Dennis To) and Chen Zhen (Danny Chan) all being dragged across in time to the modern world. This brings with it many fish out of water gags with our heroes having to adjust to the modern world as well as trying to find out how they will get back to their own time. Before they can do this, they must help Yingxiong prepare for a martial arts tournament with him hoping to win both the title and Bao’er’s heart.

The time travel element of the plot is never explained, with the audience expected to just accept it. This is in line with most of Jeffrey Lau’s work, as well as many Hong Kong comedies in general and usually is not a problem as long as the film is funny enough. The problem with Kung Fu League is that there are too many lulls between the comedy scenes, with the glaring plot holes becoming all too apparent.

Looking at the back catalogue of director Jeffrey Lau, it is unsurprising that he chose to take a more comedic approach to the material. One of Hong Kong’s best comedy directors, one only has to look at the likes of The Eagle Shooting Heroes (1993) or A Chinese Odyssey Part 1 – Pandora’s Box (1995) to see how capable a director he can be. Sadly, his more recent work has not been up to his usual standards with A Chinese Odyssey: Part Three (2016) and Soccer Killer (2017) being equally lacklustre.

Kung Fu League falls somewhere between, not totally successful, but not a complete failure. The choice of focusing on lovelorn comic book artist Fei Yingxiong (Ashin Shu) instead of our Kung Fu masters is a major misstep. Yingxiong is such a pathetic and unlikeable character that I found myself uninterested in his romance with Bao Er and rooting more for the villain. This is not a slight on Ashin Shu as an actor, rather how the character of Fei Yingxiong is written.

When they are not being pushed into the background, our four martial arts heroes at least make proceedings enjoyable. Vincent Zhou gets the most to do out of the four and the only one that develops through the course of the film. In addition, he gets the best of the films action scenes with him going up against veteran martial artist Bruce Leung Siu-Lung.

Zhou is as likeable as ever as the righteous Wong Fei Hung, with him getting to add a lot of humour into the role, something he has not been given a chance to do in the past. Zhou is hilarious when he finds out that his beloved 13thaunt has been cheating on him, especially when he finds out who it is with.

When he first played the part all those years ago in Once Upon a Time in China 4 (1994), Zhou was unfairly compared to Jet Li, who had played the part before that entry. Throughout the years, he has managed to make the role his own, with him actually having played the part more than Jet Li at this point.

Andy On is also in great form as Huo Yuanjia, who like Zhou proves to be quite adept at comedy. He is suitably deadpan and some of his exchanges with sidekick Chen Zhen are hysterical. If the film had more scenes like this it could have become a comedy classic.

Danny Chan and Dennis To get less to do, but are still entertaining. Danny Chan’s Chen Zhen is the only fictional character out of our four heroes, with Chan basically just playing a comedic version of Bruce Lee. As well as working well with Andy On, there is a running joke about why he always has to remove his shirt before a fight with him getting extremely annoyed when asked to put it back on.

Chan has emulated Bruce Lee on a number of occasions, both in dramas and for laughs. Most recently he played Lee in Ip Man 3 (2015), a role he will reprise in the upcoming Ip Man 4 (2019).

Dennis To’s Ip Man gets the least to do of the four heroes, with him not taking part in any of the films action. However, he does still get to act out a number of funny scenes. It is slightly disappointing that this version of Ip Man does not get in on the action, but this is part of the joke.

The remainder of the cast only have limited screen time. Zhang Ziwen is suitably over the top as the films main villain, going to extreme lengths just to get a girlfriend. To be honest the amount of time, money and effort this guy puts into trying to beat Yingxiong, he really does deserve to win the girl at the end.

With many previous Hong Kong movies, the saving grace would be their action scenes. It would not matter how poor the comedy is if there were some finely choreographed action to cap it off. Sadly, this is where Kung Fu League’s biggest failing lies. Considering the involvement of the underrated Tony Leung Siu-Hung, the fight scenes are mostly disappointing.

The majority of the fight scenes are either played for laughs or cut short. They additionally employ some terrible CGI, which does nothing but take away from the talents of the on screen fighters. The only standout fight is the previously mentioned scene where he goes up against Bruce Leung Siu-Lung, and even then it is digitally enhanced with some poor wire work to boot.

I would suggest the likes of Bloodmoon (1997) or The Woman Knight of Mirror Lake (2011) for better examples of Tony Leung Siu-Hung’s choreography.

Kung Fu League may be of minor interest to fans of the cast, or those looking for a quick action fix. If one lowers their expectations, there is still some fun to be had, but it must be said that everyone involved has done better work.