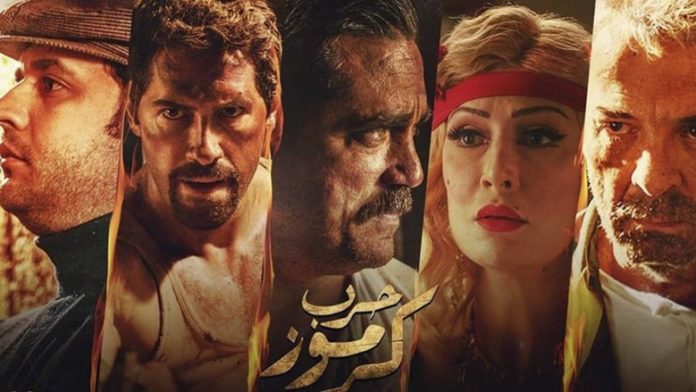 Coming hot on the heels of Triple Threat (2019), Scott Adkins returns in a villainous role in the recently released No Surrender. Not content with appearing in American and British films, No Surrender finds Adkins co-starring in his first Egyptian made movie.

Originally called Karmouz War, No Surrender was quite the success locally. With its stateside release it has been given a more generic title as well as being atrociously dubbed in English. The dubbing is around the same quality of the many Kung Fu movies that found their way to the west in the 70’s and 80’s.

Almost everyone bar Adkins speak with ridiculous sounding American accents, even though the main characters are either Egyptian or British. In this day and age, would it have been that difficult to include the original language track on the DVD?

Taking place in British occupied Egypt, sometime before the 1952 revolution. The film opens with the brutal rape of a young girl by three British Officers. After the intervention of a few locals, the British Officers find themselves locked up in the local police station ran by the heroic Youssef El Masry (Amir Karara).

It turns out that one of the officers is the nephew of the British military Governor of Alexandria, who demands his nephew’s release. When El-Masry refuses, the station is surrounded by the British army. It is now up to El-Masry and his loyal men to protect the station and make sure the British officers are brought to justice.

Other than the considerably poor dubbing, which is no fault of the film makers, No Surrender turns out to be an enjoyably well-made action thriller. With what looks like decent production values, director Peter Mimi manages to stage a number of suitably tense action scenes. The explosion heavy finale is the definite highlight, incorporating gun fights, martial arts and even a car chase.

The period detail is mostly well realised, with the sets being well utilised. It does become apparent in some parts that it is filmed on a sound stage, but this is a minor issue. There is also some poor CGI but not enough to detract from your overall enjoyment.

As well as directing, Mimi wrote the screenplay alongside producer Mohamed ElSobky. Because of the dubbing, it is difficult to fully judge the dialogue. The plot essentially boils down to a siege movie, akin to the likes of Rio Bravo (1959) or Assault on Precinct 13 (1976), with a small group of heroes trying to stop the villains from overtaking the prison/police station.

In terms of characters, there are no grey areas. Characters are either heroes (Egyptians) or villains (British). Every British character is shown either to be a rapist, a murderer or a racist. Even the Egyptian characters that are initially suggested to be villains turn out to be heroes and patriots.

The performances are mostly decent, but it is hard to fully review the quality of the acting due to the poor dubbing that has been carried out.

The promotional materials for No Surrender have mostly focused on Scott Adkins, however he is not the star of the film, with Amir Karara clearly being the lead. Adkins role actually only amounts to an extended cameo, with him having around 15 minutes screen time at best. He plays an imprisoned Scottish Soldier, who has been locked up for misconduct.

Adkins is shown sporadically throughout the first hour, just to remind the audience he is there. He is finally unleashed during the finale, with him being a one man army against the Egyptian’s. Adkins fans should be happy, with him getting to do what he does best, punching, kicking and flipping as only he can. His final fight with Karara is a clear highlight, although frustratingly cut short.

Adkins character does not even have a name, only being credited as “The Crazy One”. His Scottish accent is slightly ropey, but Adkins manages to overcome this. He is still one of the main highlights of the movie, even with his limited screen time. Interestingly, he is credited in the closing credits as Superstar Scott “Boyka” Adkins.

Amir Karara has great screen presence as the films main protagonist Youssef El Masry, overcoming the poor dubbing. He is reminiscent of the Hollywood heroes of old, looking more like a real person than the well groomed male models that headline many modern action movies.

His character is suitably courageous, although his initial introduction does not give the best impression with him slapping both his sisters across the face. Surprisingly this is shown as a term of endearment, with him apparently having his sisters best interests at heart. Thankfully his later heroics help overcome this first impression.

Karara had worked with director Peter Mimi the year before on television series Kalabsh (2017), before the two of them went on to collaborate on No Surrender.

Those expecting No Surrender to be a star vehicle for Scott Adkins may be disappointed that he is only a supporting player. With this in mind, there is enough action and drama here to keep most undemanding viewers satisfied. It is just a shame that audiences are not given a chance to view the film in its original language.