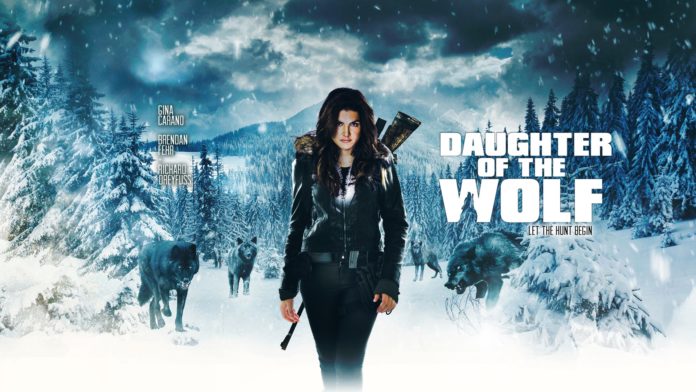 After scoring a leading role in Steven Soderbergh’s Haywire (2011), it seemed a sure bet that Gina Carano would become one of Hollywood’s new leading action heroes. While she has co-starred in a number of big budget blockbusters like Fast & Furious 6 (2013) and Deadpool (2016), her ensuing leading roles have been sadly lacklustre.

This brings us on to director David Hackl’s Daughter of the Wolf, a snowbound kidnapping thriller, which finds Carano’s ex special forces operative trying to rescue her son from a gang of criminals led by the deranged Father (Richard Dreyfuss).

While it is a major improvement on Carano’s last starring vehicle, sci-fi actioner Scorched Earth (2018), Daughter of the Wolf still has many of that film’s same issues, mainly consisting of a reluctance at showing Carano doing what she does best. Other than a couple of poorly conceived fight scenes, the majority of the action is of the shooting variety which only generates a modicum of excitement.

This is a shame as the film gets off to a good start, with the story already being in full swing. We are introduced to Clair (Gina Carano) while she is digging up a bag of money, which she is to hand off to a gang of shady criminals. We only find out later that this money is to pay a ransom for her kidnapped son. The criminals end up double crossing Clair, trying to kill her and keep the money for themselves. Unfortunately for them, things do not exactly go to plan.

The ensuing shootout and car chase are suitably violent, showing that Clair is not someone to be messed with. Sadly the rest of the movie does not live up to the exciting beginning, settling into a decidedly slower pace and turning into more of a thriller than the action movie you would expect.

Director David Hackl cut his teeth on the Saw franchise, making his debut with Saw V (2008). While Daughter of the Wolf never reaches the levels of violence of that series, there are still some gruesome kills that earn the film it R rating. The level of violence slightly makes up for the lack of excitement in the film’s action scenes.

The beautiful snow covered locations of British Columbia also make up somewhat for the lack of action, adding some much needed production value and setting it apart from other DTV action movies.

Hackl includes a number of tense sequences where the main characters have to face off against a pack of hungry wolves, which are some of the most effective scenes in the film.

The film is similar in style to Hackl’s earlier action thriller Into the Grizzly Maze (2015), in that it mostly takes place in the wild and focuses on a small collection of characters. Likewise it has solid performances and some interesting character beats that set it apart from the norm.

Carano equips herself well in the lead role, showing great improvement as an actress since Haywire. Although her character is clearly a bad ass, the script gives her ample scenes to show her emotional side even if the dialogue is not exactly the best it could be.

As mentioned, the filmmakers seem to be apprehensive to show Carano in full fighting mode, giving her only the briefest of fight scenes. Carano still manages to impress in what action there is with her skills managing to show through the poor fight choreography.

One of the main saving graces of the film is film legend Richard Dreyfuss, who gives a terrifically over the top performance as main villain Father. It is implied that his gang are made up of children that he has kidnapped throughout the years. Even though the part could be seen as being beneath an actor of his calibre, Dreyfuss does not let this deter him, giving the role his all.

Brendan Fehr puts in a solid performance as Larsen, one of the kidnappers. Captured by Clair, he eventually becomes her unwilling ally. There is more depth to his character than initially expected, making him stand out from the rest of the supporting cast.

Nika Agiashvili’s script tries to add in some interesting elements, even if they are not fully successful. One strange inclusion is the silly idea that Carano’s character seems to have some kind of connection with the wolves, which does not fit with the story that is being told.

Daughter of the Wolf ultimately is no more than an average time filler, one that may satisfy fans of Carano or Dreyfuss, but others come away disappointed if they were looking for an action fix. Hopefully Carano’s upcoming role in the Star Wars television series The Mandalorian (2019) will put her to better use.