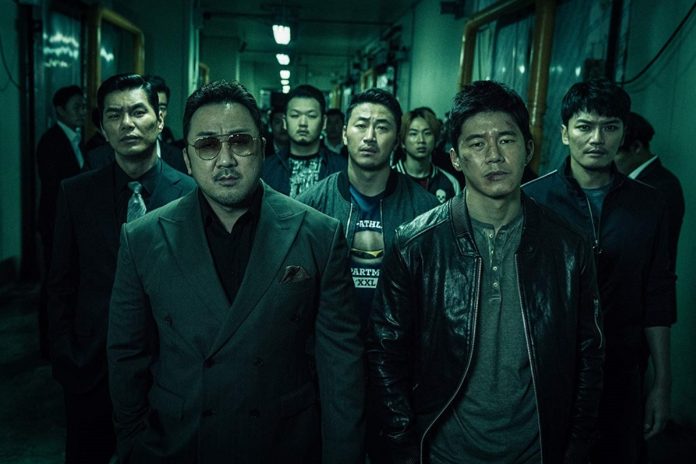 Director Lee Won-tae returns to cinema screens with sophomore effort, The Gangster, The Cop, The Devil, a lean and mean action thriller that further cements the star status of leading man Ma Dong-seok (aka Don Lee).

Korean film makers seem to excel when telling stories about serial killers, with classics like Bong Joon-ho’s Memories of Murder (2003), Na Hong-jin’s The Chaser (2008) or Kim Jee-woon’s I Saw the Devil (2010) being some of the best examples the genre has to offer.  While The Gangster, The Cop, The Devil never reaches the sublime heights of those mentioned, it still proves to be a suitably action packed and gritty affair.

Taking place in 2005, Korea is being plagued by a violent serial killer, known only as K (Kim Sung-kyu). Picking his victims at random, he foolishly attempts to take the life of Mob Boss Jang Dong-soo (Ma Dong-Seok). Unlike the killers previous victims, Jang is able to fight off his attacker, although not before being stabbed a couple of times. Feeling humiliated, Jang now makes it his mission to track down the murderer down at all cost.

Cop Jung Tae-suk (Kim Mu-yeol) is also on the case. He places gangsters and the killer in the same category but realises in order to stop this spate of killings that he will have to team up with the criminals he so despises, namely Jang.

So starts an uneasy alliance between cop and gangster, with them both agreeing that whoever catches the killer first will be allowed to dish out whichever punishment they see fit.

As well as trying to catch the killer, Jang has to deal with a brewing gang war, with cop Jung ending up in the middle.

He utilises his locations well, with the narrow streets being especially well used during a number of exciting chase scenes.

A nice touch is how the criminal underworld work together to bring down a worse kind of evil, being somewhat reminiscent of Fritz Lang’s classic serial killer thriller M (1931), albeit with considerably more fight scenes. Lee incorporates a series of well edited montages that show the lengths that both cop and criminal are willing to go to catch their prey.

Further complimenting the film are some slick visuals from director of photography Park Se-seung, bringing to mind the films of Michael Mann.

Although the mentioned fight scenes are some of the film’s main selling points, Lee still manages to fill the film with memorable performances.

As expected, Ma Dong-Seok is terrific in the lead role. Under no circumstances could he ever be classified as a hero, with his introduction involving him using a human as a punching bag. Later he pulls out a man’s teeth with his bare hands, which is not exactly something you see every day.

Still in comparison with The Devil of the title, he is a saint. At least Jang has some form of moral code, being loyal to his men. In his view, he is only violent to those who deserve it, unlike our Devil who kills indiscriminately.

Ma Dong-Seok has been going from strength to strength recently with the recent announcement of him featuring in the upcoming Marvel movie The Eternals (2020).

In addition, he is slated to reprise his The Gangster, The Cop, The Devil role in the planned Hollywood remake set to be produced by no less than Sylvester Stallone.

Kim Mu-yeol as loose cannon Jung slightly pales in comparison. This is in no detriment to the actor, just more to do with how commanding a screen presence Ma Dong-Seok is. Still, Kim is appropriately cocky as the dedicated cop, throwing himself into the thick of the action.

The supporting characters made up of Jung’s fellow cops and Jang’s gangsters all have their own small but memorable moments, with their alliance bringing up some hilarious dialogue.

Only Kim Sung-kyu’s role as serial killer K seems somewhat underwritten, with the character having no clear reasoning or motive for his crimes. In a way this works in the character’s favour, making him seem unpredictable. Kim still does well with the material, being fittingly evil throughout.

Accompanying the on screen action is an energetic rock soundtrack by ace composer Jo Yeong-wook. This is just another in a line of great soundtracks from Jo, with his scores for the likes of The Handmaiden (2016) and A Taxi Driver (2017) being other fine examples of his work.

It will be interesting to see how the Hollywood remake differs from this and what variation Ma Dong-seok will bring to his character in this new version. I will also wait with interest to see which Hollywood superstar is chosen to star alongside him. If the remake can somehow manage to live up to the original, Hollywood will be on to a winner.