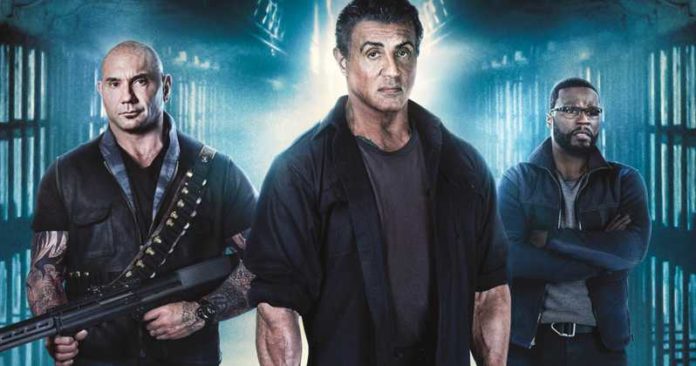 Rushed into production before the second film was released, Escape Plan: The Extractors has turned out to be a major improvement on the disappointing sequel. While it will never be in anyone’s top ten favourite Stallone movies, it makes for a solid and entertaining B movie.

Other than featuring some of the same cast, the third entry does not really acknowledge its predecessor, working as a straight sequel to the first movie. Sylvester Stallone once again stars as ray Breslin, this time hired to rescue the kidnapped daughter of a Chinese Billionaire who is being held prisoner in a Latvian prison. Things become personal when Breslin’s girlfriend Abigail (Jaime King) is also taken prisoner.

Partnering up with Trent (Dave Bautista), Shen Lo (Max Zhang) and Bao Yung (Harry Shum Jr.), they plan to covertly break into the prison and rescue their loved ones along with the rest of the hostages being held to ransom.

Taking over directing duties from part two’s Steven C. Miller, John Herzfeld directs in a workmanlike fashion, which actually works to the films favour. The action is mostly shot clear with only a slight choppiness in the shooting of the fight scenes. There is none of the sci-fi trappings of the second movie, with Herzfeld keeping everything suitably grounded.

Herzfeld utilises the prison setting well with the majority of the film taking place there. Although it is supposed to be in Russia, the prison is actually Ohio State Reformatory, the same prison used in Stallone’s Tango and Cash (1989).

Herzfeld keeps things moving along at a swift pace and with a run time of only 1 hour 25 minutes, there is little chance of viewers becoming bored.

The majority of the action comes in the second half of the film with a good deal of bloody and bone crunching fight scenes. The only action scenes during the first half are a brief fight in an airport terminal where Harry Shum Jr takes on a gang of kidnappers. In regards to Shum Jr., he does quite well here and could potentially become a decent action star with the right material.

The other is Zhang Jin’s introduction, where he fights off an office security team armed only with an umbrella. The fight is well choreographed and notable for featuring the great David No. Sadly this is the only scene he appears and does not get much of a chance to show off his impressive martial arts skills.

The veteran director has been friends with Stallone for years and has worked with him numerous times. As well as directing the documentary Inferno: The Making of The Expendables (2010) and the drama Reach Me (2014), which had Stallone in a small supporting role, he also acted alongside him in Cobra (1986).

Stallone recently stated that Escape Plan 2: Hades (2018) was the worst produced film he has ever appeared in, so it is clear that he wanted someone on set he could trust. It would seem that his comments are more in relation to the overall production rather than being pointed squarely at part two’s director Steven C. Miller, who I personally thought had done a commendable job considering the obstacles in his way.

Unlike part two, Stallone has considerably more screen time. Although it is still somewhat limited in comparison to his other starring vehicles, his role does not feel like a cameo this time round.

The part of Ray Breslin was never one to stretch him as an actor, but Stallone never disappoints and throws himself into the action. Even at 72, he is still totally convincing as the tough action hero with him taking part in a good few of the film’s fight scenes and shootouts.

There is also a touch of Rambo thrown in with Breslin sneaking about and laying traps for his prey, or taking them out with a big knife.

Dave Bautista provides capable support as Trent, but his role is mostly an extended cameo. As usual his charisma shines through and he does get one good fight scene during the finale which is one of the film’s action highlights.

Similarly to the second movie, Escape Plan: The Extractors had a good deal of investment from China, which led to the casting of Huang Xiaoming in a featured role. Huang does not return this time as martial arts star Max Zhang now taking his place in a similar role.

Zhang’s character Shen Lo, like Breslin, has a personal stake in the mission. Although Stallone gets top billing, Zhang is essentially the star of the film. While his English line delivery comes off as somewhat stilted, he makes up for this in his martial arts skills.

Zhang is swiftly rising in popularity, quickly becoming a fan favourite amongst martial arts fans. Movies like The Brink (2017) and Master Z: Ip Man Legacy (2018), where he again co-starred with Dave Bautista, are just two recent examples of his skills.

Escape Plan: The Extractors is not as fine a showcase for his skills as those, but he still manages to impress. His most memorable fight scene has him going up against martial arts legend Daniel Bernhardt.

It is also great to see Bernhardt in yet another high profile feature after appearing in John Wick (2014) and Atomic Blonde (2017). Unfortunately, other than his fight with Zhang, he is mostly wasted in a generic henchman role.

The same is true of the females in the cast who are similarly wasted in the typical damsel in distress roles. Jaime King fares slightly better than Malese Jow, but this is far from her best work.

The main cast is rounded out by Devon Sawa as the main villain, Lester Clark Jr., the son of Vincent D’onofrio’s character from the first movie. He is rightfully pissed by what Breslin done to his father and seems to overlook how evil his father was.

Jr. proves to be a chip off the old block with no clear regard for human life. Sawa plays up the dramatic aspects of the character well but poses no real physical threat to Stallone when the time comes.

It was also nice to see Russell Wong, even in a limited role, as he has been absent from screens for some time. He at least is awarded more screen time than Curtis “50 Cent” Jackson, who literally appears for around 5 minutes of the running time, which is surprising considering where his name appears in the credits.

The script by Herzfeld and Miles Chapman, who wrote the last two entries, is typical action movie stuff. The characters are thinly drawn with a basic action movie plot. Luckily, the actors are able to imbue them with more personality than is on the written page. Still, all involved have done better in the past.

Escape Plan: The Extractors is a straight forward action thriller, ideal for those looking for a quick action fix they can switch their brain off to. It should at least keep Stallone fans entertained until the release of Rambo: Last Blood (2019) later this year.