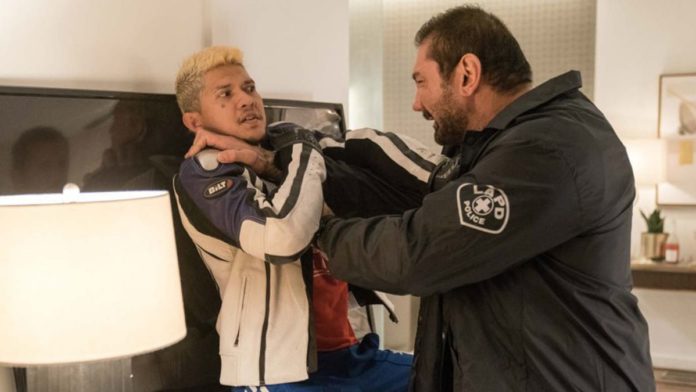 The buddy cop genre has featured some of Hollywood’s finest action movies, especially rising in popularity during the golden period of the 1980’s. Titles like 48 Hours (1982) and Lethal Weapon (1987) are only two of the classics that were produced during this time.

Production of buddy cop movies may have decreased since then but there are still some good examples of the genre. 21 Jump Street (2012), The Other Guys (2010 ) and Let’s Be Cops (2014 ) all turned out to be fun with a good mixture of action and comedy.

We can now add Stuber to this list, a surprisingly violent actioner that features a fine balance between laugh out loud comedy and bloody set pieces.

Dave Bautista stars as Vic Manning, a determined cop who has been tracking criminal Tedjo (Iko Uwais) for years. After the death of his partner at Tedjo’s hands, Vic focuses all his time and efforts on catching him. After hearing nothing for months, Vic finds out from his informer that Tedjo has returned. Unfortunately for Vic, this is the same day he has decided to get Lasik surgery, making it increasingly difficult for him to catch his prey.

Due to his temporary blindness, Vic has no choice but to call for an Uber with Stu (Kumail Nanjiani) being the unlucky driver. Stu finds himself an unwilling accomplice in helping Vic with the mismatched pair getting involved in no shortage of car chases, shootouts and punch ups in their pursuit of Tedjo.

This is the most mainstream film to date for Canadian director Michael Dowse. The plot may be simple, but the winning performances he gets from his two leads paper over any cracks evident in Tripper Clancy’s script.

He has proven his comedy directing skills in the past, with him directing the criminally underrated Take Me Home Tonight (2011) as well as cult favourite The Goon (2011). The comedy may be seen as low brow, but there are numerous hilarious scenes. One of the funniest has Vic and Stu questioning a suspect in a strip club with Vic oblivious to the fact that all the strippers are men. To say that you see more than is expected is an understatement.

As previously displayed in The Goon, Dowse is equally adept with action sequences, even if he is guilty of opting for the old shaky cam effect. Still, for a comedy, the action is extremely brutal and reminiscent of the action comedies of years ago when studios did not feel the need to make every action movie PG-13.

One drawback in terms of the action is that there is not more of it. Considering the inclusion of Dave Bautista and Iko Uwais, I did expect the finale to be on a grander scale, but for a medium budget action movie, it gets the job done.

The majority of screen time is focused on Nanjiani and Bautista, with the supporting cast made up of Iko Uwais, Mira Sorvino, Karen Gillan, Betty Gilpin and Natalie Morales only appearing intermittently. Gilpin and Morales do get slightly more to do than others, with Gilpin as the object of Stu’s affection and Morales as Vic’s disappointed daughter.

Bautista has already proven his comedy chops in the Guardians of the Galaxy movies, with his deadpan delivery being one of the highlights of that series. He brings the same qualities to his performance here, with him playing the situation completely serious no matter how ridiculous it becomes. His temporary blindness generates a great deal of the films funniest moments, such as his attempt to drive his car after finding out about Temjos return.

As well as flexing his comedic muscles, he still kicks ass when the time comes, getting involved in a number of painful breakdowns and shootouts.

He works well with Nanjiani, who is also no stranger to comedy with his role in television series Silicon Valley (2014) and the more recent The Big Sick (2017) being his best known work. He gets some laugh out loud moments as the film progresses with his exasperation of his situation, to his determination to get to a planned booty call. Nanjiani career is only going to rise further as it has been announced that he is currently in talks to star in the upcoming Marvel movie The Eternals.

Iko Uwais fans will probably be disappointed as he is mostly a one note villain with limited screen time. With hardly any dialogue, the most his fans have to look forward to is his two fight scenes with Bautista, which are well staged but nothing we have not seen him doing before, and better.

It would seem that Hollywood is still unsure what to do with Uwais, as this and Mile 22 (2018) have paled in comparison to his ground breaking work in The Raid (2011). Only the recent Triple Threat (2019) managed to come close to emulating the excitement of that classic. Here’s hoping that he will be better utilised in his upcoming Netflix show, Wu Assassins (2019).

As well as the action harkening back to the glory days of the 1980’s, composer Joseph Trapanese contributes a synth heavy score that brings back memories of some of the action classics of years back.

Stuber is never going to be remembered in the pantheon of great buddy cop movies, but for a fast and funny action fix it does the trick. It would appear that I enjoyed it more than others. It will probably do better business when released on home video, where it is ideally suited.