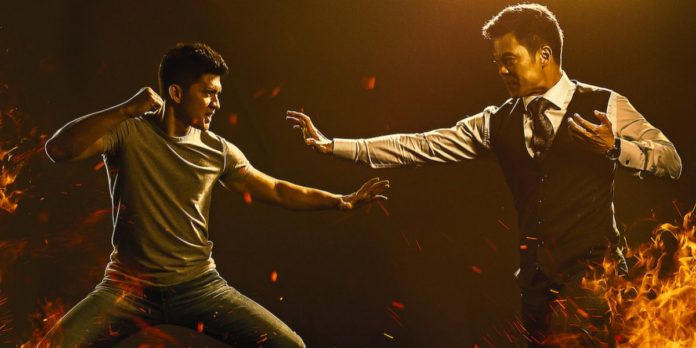 For a while now television has been the go to place for martial arts fans looking for quality fight action, with AMC’s Into the Badlands (2015) and Cinemax’s excellent Warrior (2019) only being two of the most recent examples. Even though made on a tighter budget than most Hollywood actioners, these shows feature an abundance of creatively choreographed fight scenes that are on par with the majority of action movies currently playing in cinemas.

This brings us to Netflix’s new series, Wu Assassins, a supernaturally infused crime thriller loaded with martial arts fight scenes. With a plot that is made up of equal parts Year of the Dragon (1985) and Big Trouble in Little China (1986), you could never mistake Wu Assassins as being original. Still being devoid of originality is not always a bad thing and even though the show is guilty of falling into cliché, there is no denying how fun it is. Even the extremely under-par special effects are not enough to ruin people’s enjoyment and in some ways adds to the overall feeling of the show.

We are first introduced to Chef Kai Jin (Iko Uwais) who is helping out in his friend Jenny’s (Li Jun Li) restaurant. After some local Triad members cause trouble, Kai quickly steps in. Kai narrowly avoids a fight but the Triad later show up at his catering van for some payback. Kai initially fights them off before attempting to make his escape.

During his escape he comes into contact with a mystical spirit who gifts him with the power of the Wu Assassin. The spirit informs him that his mission is to recover supernatural powers from five Wu Warlords, criminals hiding in plain sight who are instilled with magical abilities.

Of course Kai is reluctant, stating that he is not a killer, but it is not long before he has to fight for not only his life but that of his friends. Making things more difficult for Kai is that one of the Wu Warlords is his adopted Father, Uncle Six (Byron Mann).

There is also the issue of undercover cop C.G. (Katheryn Winnick), who finds herself in the middle of all this mystical trouble. With her joining in the fight alongside Kai, they must decide how to defeat the Wu Warlords before they destroy the world.

The opening episodes are directed by executive producer Stephen Fung, who sets the general tone of the series. Alternating between hard hitting gangster drama, bone crunching martial arts and frankly silly fantasy elements, he makes sure that they all run fluidly to make a satisfying whole. Like many Netflix shows, there is some padding here and there to stretch out the run time, but this is mostly kept to a minimum with the full season only running to a well managed 10 episodes.

Fung is no stranger to handling martial arts action with him previously helming House of Fury (2005) where he worked alongside legendary fight choreographer Yuen Woo Ping. There was also the cyberpunk styled Tai Chi 0 (2012) and Tai Chi Hero (2012) which had their own fair share of martial arts action.

The show was created by Tony Krantz and John Wirth, who also executive produced. Both are TV veterans with a host of producing credits between them. Wirth wrote the first episode before handing the reigns over to various writing talents. Wirth has written for numerous television shows, with one of the best of them being Hell on Wheels (2011), where he additionally worked as showrunner for the latter seasons.

While Iko Uwais has appeared in western productions before, this is the first that has actually had him as the lead. As noted with the earlier Triple Threat (2019), Uwais English has suitably improved since his break out hit The Raid (2011). Sure, his line delivery is still stilted, but he does incredibly well when you consider the amount of English dialogue he has to deliver in comparison to any of his other productions.

His character of Kai is seriously conflicted. With a reluctance to kill, he is not exactly the best choice for an assassin. He also has the problem that one of the Wu Warlords happens to be his adopted father, which complicates things further.

As expected, Uwais is exceptional in the plethora of fight scenes. We get to see him in action right away with the series opening with a frenetic fight scene before the show flashes back to see how he got to this point in the story. It is interesting to see his character before he is gifted his powers, with his fight scene in his catering van lacking the finesse he shows later on. The fight is more in line with the works of Jackie Chan, where he uses whatever appliance available in order to fight off his attackers.

Katheryn Winnick also gets to show off her own considerable martial arts skills. While she has taken part in numerous battle scenes during her television show Vikings (2013), Wu Assassins gives her more opportunity to show off her capabilities. Winnick has been training in martial arts since she was seven, even going on to run her own schools.

Her fight scene in an unopened casino is a clear highlight, with her taking on numerous gang members while Kai fights with Uncle Six below. What makes this scene more important as this is when C.G. finds out that there is more going on than just a brewing gang war.

Winnick is not superhuman in her fight scenes, with her taking a considerable amount of punishment throughout. This just makes the fights more realistic and exciting.

As well as showing off her fighting skills, Winnick gets to show off her emotional side. Like Kai, her character of undercover cop C.G. is morally conflicted, not knowing if she is on the right side. One particularly memorable scene is where she shares with Lewis Tan’s Lu Xin why she prefers to work undercover.

Speaking of Tan, this is probably the best role he has had to date. While he impressed in the likes of Iron Fist (2017) and Into the Badlands (2015), he only had limited screen time. With Wu Assassins he is given ample chance to show off his physical skills as well as his acting chops.

Assisting them is Li Jun Li as Jenny and Lawrence Kao as her brother Tommy. Both do well in their roles but do feel as if they were included to pad out the running time and add additional subplots to the main story. Kao is essentially the liability of the group, but does get better as the series progresses. Li fares slightly better, with her getting to take part in a number of brutal beat downs with her square offs with JuJu Chan being particularly well done.

Chan’s role of Zan gives her multiple opportunities to show off her impressive martial arts skills. Initially appearing to be a simple henchwoman, Zan turns out to have many layers as the show progresses.

Almost stealing the show from all of them however is the charismatic Byron Mann. Uncle Six is not the clear cut villain that you would expect from the trailers with him genuinely caring about Kai and doing what he thinks is best for Chinatown. The only problem with him is that he looks far too young to be Kai’s dad, adoptive or otherwise.

Like his cast mates, Mann gets to take part in a good deal of the action, which is well choreographed to cover the use of stunt doubles when required, although they are evident in a couple of shots.

Rounding out the main cast is the excellent Tommy Flanagan as Scottish gangster McCullough. McCullough is an ex Wu Assassin who now harnesses the power of the wood Wu, which makes him pretty much immortal.

Unlike a typical villain, McCullough has a tragic back story. Once he had a loving family but they were taken from him by one of the Wu Warlords. In order to try and bring them back, he exchanged the power of the Wu Assassin for the Wood Wu, not realizing that it would damn him into an eternal life where he is forced to live on without them. Although he is clearly a bad guy, his motivations to be reunited with his family are understandable.

In addition to the main cast, there are smaller one episode roles for such talents as Jeff Fahey, Kevin Durand and Summer Glau, who all do great with the limited screen time they are given.  The only drawback is the use of martial arts legend Mark Dacascos, who shows up as a monk Kai can transform into in order to disguise his identity. He is only used fleetingly and although it is great to see him, it is a shame he is wasted in such a throwaway role. Here’s hoping he is better utilised if the show gets a second season.

Other than this, Wu Assassins is a fun ride that should satisfy most martial arts movie fans. While it does have some minor issues, these would not majorly impact on your enjoyment of the show. Bring on season 2.