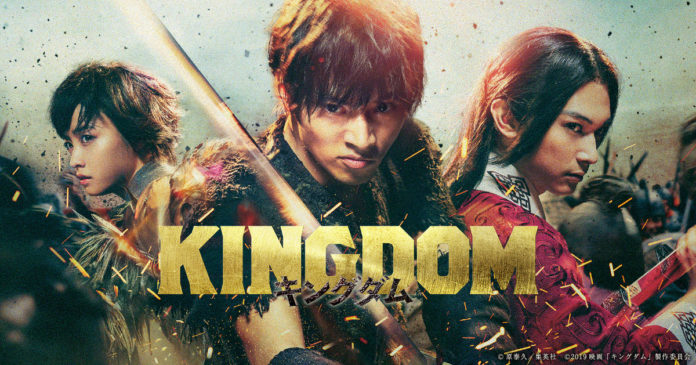 The young Xin and his friend Piao (also Yoshizawa) are both war orphans. After Xin saw famous general Wang Qi (Takao Osawa) as a child, he has dreamed of becoming the most famous general who ever lived. Xin and Piao are constantly training with the thought that one day they will become free men.

Luckily for Piao, he is spotted training by Kings advisor Chang Wen (Masahiro Takashima) who wants to hire him to work in the King’s Palace. Seeing this as a great opportunity, Xin encourages his friend to accept the offer. Unbeknownst to Xin, his friend is really required due to his uncanny resemblance to King Ying Zheng.

Xin only finds this out upon Piao’s return, where his friend shows up close to death. It turns out that the King’s throne has been usurped by his brother, with the ministers and generals of the court siding with him. Whilst the King fled, Piao heroically took his place, ultimately paying with his life.

Xin reluctantly decides to accompany Zheng on his quest to get back his throne even though he blames him for his friend’s death. On the way they gain the assistance of… and a range of other assorted characters.

It may seem slightly strange for a film based on such a famous period of Chinese history to be made with an entirely Japanese cast and crew, but once you get past this Kingdom is terrific fun, jam packed with energetic performances and ingeniously choreographed action scenes.

Shinsuke Sato has become the go to director for helming quality manga adaptations. His takes on the likes of Gantz (2011), Library Wars (2013) and the recent Bleach (2018) are all great examples of his work, and while fans of the Manga’s they are based on may complain of some of the liberties taken, they still remain high quality blockbusters.

Some of the performances border on the melodramatic, but they are fitting with the type of film Kingdom is. A couple of minor characters do feel out of place in regards to the story being told, but they are clearly carry overs from the Manga. Still, Sato integrates these elements well, with him keeping the pace moving so fast that you would not have time to think about how jarring these characters could otherwise be.

One of the most important ingredients to Kingdom is its plethora of fight scenes. Sato’s film is filled with various sequences of combat, both one on one sword fights and large scale battle scenes.

Sato was smart to employ the skills of action director Yûji Shimomura. One of the finest action directors in Japan; he has worked with Sato on numerous occasions such as Library Wars, Inuyashiki (2017) and Bleach. His action scenes are suitably tailored to the skills of the actors, with each of our heroes and even villains getting their chance to shine. The fights do employ some wire work, but this is well integrated and helps give a type of hyper reality to the action scenes.

The character of Xin comes across as somewhat hot headed and short tempered. For the majority of the film he is angry. In addition, he is not the sharpest tack in the box with even his allies commenting how dim witted he is. Kento Yamazaki does well in the role, even if he can become slightly annoying with his angry and cocky behaviour. Saying this, he still handles his action scenes with considerable skill and there is no way you will not be rooting for him by the time the finale comes.

From a solely acting point of view, Ryo Yoshizawa fares better. Ying Zheng initially comes across as cold and uncaring, but as the film progresses you begin to find out the reason he wants to reclaim his throne is to help and unite the people of China. Like Yamazaki, he throws himself into the action scenes, but gets less of them than his co-star.

Tagging along is Kanna Hashimoto as Diao, who is a likable presence but does not really offer our heroes much in the way of help when it comes to fighting, with her mostly getting in the way.

A stronger female presence is Masami Nagasawa as Yang Duan He, the leader of the mountain tribe who helps Zheng in his fight to reclaim the throne. Showing she is just as capable as the men, she takes on all comers in the action packed finale with her using an impressive twin sword technique.

On the villain side, Kanata Hongo as the King’s brother Cheng Jiao is a truly hate worthy villain. Equal parts evil and cowardly, you will be willing for him to get his comeuppance.

Supporting him are the likes of Masayo Kato and legendary martial artist Tak Sakaguchi. Tak only gets one full fight scene, going one on one with Yamazaki, but is especially well crafted. This mark’s just another in a long line of collaborations between Tak and action director Yuji Shimomura dating back to cult classic Versus (2000). More recently he headlined Shimomura’s directorial effort Re:Born (2016), which is a must see for Martial Arts fans.

Lastly, the great Takeo Osawa makes for an imposing figure in the few scenes he appears. As the film is clearly left open for a sequel, it will be interesting to see what’s in store for his character with him hopefully getting more screen time.

As I have never read the Manga that Kingdom is based upon, so I can in no way judge how successful an adaptation it is, but as a standalone film it is an exciting historical epic that should satisfy fight fans with its multitude of action scenes.