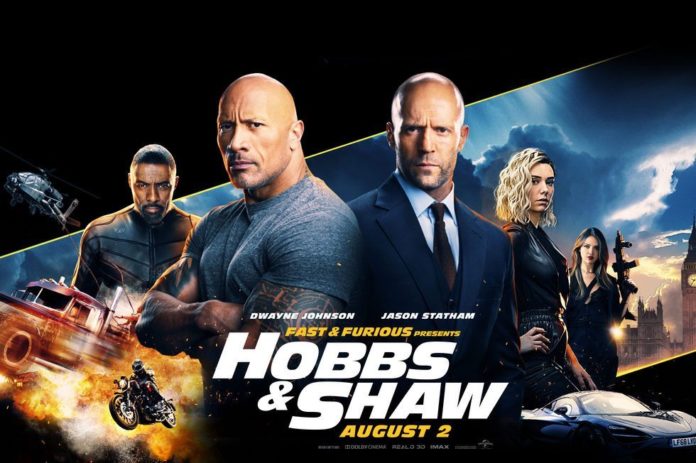 Who would have thought that when director Rob Cohen launched Fast and the Furious (2001) that it would go on to spawn what has become Universal Pictures most lucrative franchise. Spanning almost two decades, the franchise has mostly gone from strength to strength, with each new entry upping on the last. While there have been some slight dips in quality as the series has went on, the franchise has pretty much always gave the audience exactly what they expect.

The character of Luke Hobbs (Dwayne Johnson) was first introduced in the fifth part of the series, Fast Five (2011). This turned out to be just the shot of adrenaline that the franchise needed, with him stealing every scene.

The same is true of Jason Statham’s Deckard Shaw. The character was initially teased at the end of Fast & Furious 6 (2013), before going onto be the main antagonist in the following entry, Furious 7 (2015). Even with all the production difficulties of the movie, the worst being the untimely death of series star Paul Walker, Furious 7 turned out to be possibly the most enjoyable entry yet.

With The Fate of the Furious (2017), both Statham and Johnson shared a considerable amount of screen time together, with them having a fun rapport which was one of the best elements of the film. With this, it makes perfect sense that the producers would choose the two of them to launch the first spin off of the franchise, Fast & Furious Presents: Hobbs & Shaw.

The film begins with a bang, with MI6 agent Hattie Shaw and her team infiltrating a storage facility to locate a deadly virus, Snowflake. Shortly after they have retrieved it they find themselves ambushed by super villain Brixton (Idris Elba), who works for shadowy criminal organisation Eteon.

Hattie barely escapes with her life, with Brixton killing the rest of her team. In order to stop Brixton from stealing the virus, she has no choice but to inject herself with it and go on the run. Not only is she being hunted by Brixton but also the authorities who mistakenly think she murdered her own team to steal the virus.

The CIA decide to bring in both Luke Hobbs and Deckard Shaw to try and track her down, but without informing the other of who they are expected to work with. For Hobbs, it is about saving the world, but for Shaw it is more personal, with Hattie being his younger sister.

Like the best buddy movies, our heroes are not exactly thrilled to be working together but have to put their differences aside and work together if they want to stop Brixton, with the two slowly building up some form of mutual respect.

With director David Leitch at the helm, it should come as no surprise that the action is excellent. He had already proven his skills behind the camera with John Wick (2014), Atomic Blonde (2017) and Deadpool 2 (2018), creating some of the most visceral and exciting action scenes in years.

I was slightly concerned how he would adapt to the PG-13 rating, but this turned out to be non-issue, with him still managing to fill the screen with terrific fight choreography and vehicular mayhem. In regards to the age rating, he manages to stretch it as much as possible. There are particular parts during the fight scenes that would have automatically made this an R rating in the past, but thankfully the ratings board seems more lenient these days.

As in line with the main series, the action is ridiculously over the top, with the various fights, shootouts and car chases consistently defying the laws of gravity. This is probably the most far-fetched the series has went. While other entries had their fair share of cars flipping and people flying through the air, they didn’t have bulletproof super humans. Some may consider this a step too far, but by this point in the series I would assume most fans will just accept it.

Both Johnson and Statham are excellent in their roles. The animosity between the characters gives the two some terrific dialogue, with them constantly putting each other down every chance they get.

Of course, they still get to show their athletic sides in the multiple action scenes throughout. One definite highlight is a fight in Hattie’s apartment where Statham takes on three henchmen, one of which is played by martial arts legend Daniel Bernhardt.

This marks the second time Statham and Bernhardt have went up against each other, with their fight in Parker (2013) being truly memorable. It’s been great to see Bernhardt appear in more high profile work of late, which is partly due to director Leitch, with him previously casting him in both John Wick and Atomic Blonde.

Another highlight is the action packed finale. Taking place in Samoa, it has Shaw, Hobbs and his family going old school to take on Brixton and his henchman. During the fight, Johnson utilises quite a few wrestling moves which should keep his fans happy.

Wrestling fans should also look out for Johnson’s fellow WWE star Roman Reigns, who plays one of Hobb’s family members. His part is pretty much dialogue free, but he does get to show off some impressive moves.

Idris Elba makes for a menacing villain, with him having a very twisted ideology. Giving him and Shaw a shared backstory makes the conflict between the two slightly more interesting. It also assists in ret-conning the character of Shaw, who was originally introduced to the series as a villain.

Hobbs and Shaw is not a men only show. Vanessa Kirby as Deckard’s sister Hattie gets involved in a great deal of the action and does not fail to impress. Kirby has prior experience of blockbuster movie making, with her co-starring alongside Tom Cruise in Mission Impossible: Fallout (2018). She is far better used here, with her being terrific in the role. Here’s hoping that her character can return for any sequels that may be planned.

There is also the beautiful Eiza Gonzalez who has a small role as an old acquaintance of Shaw’s. Helping the team out in their time of need, she could play a larger role in any upcoming sequels. Rounding out the cast are the likes of Cliff Curtis and Eddie Marsan, who are always good value, even with their limited screen time.

The script was the work of series stalwart Chris Morgan as well co-writer Drew Pearce. Morgan has been part of the franchise since Fast and the Furious: Tokyo Drift (2006), so he knows exactly what makes this series tick. As well as being the most over the top entry so far, it is also the funniest, no doubt to do with the inclusion of Pearce as co-writer.

As well as being filled with great one-liners, there are some hilarious side characters which just add to the overall fun factor. This gives excuse for there to be a number of excellent cameos that I would not want to spoil here.

Even though a spin off, Hobbs and Shaw turns out to be possibly the most entertaining entry yet in the Fast and the Furious franchise. It will be interesting to see what Justin Lin does with the currently in production part 9, as this will be hard to top, although I am in no doubt Lin will try his hardest.