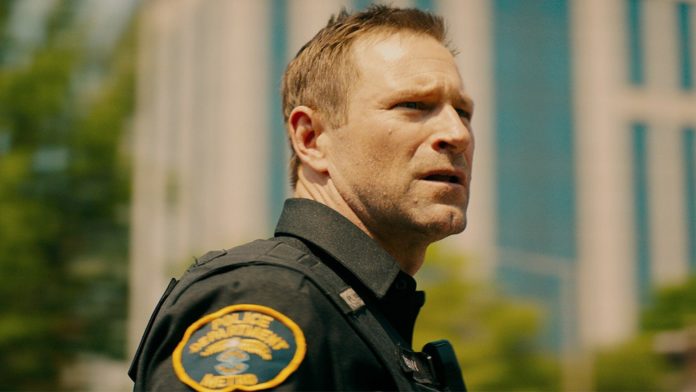 His last film, Escape Plan 2: Hades (2018) turned out to be a blip on his filmography with him being constrained by extremely low production values which detrimentally affected the final film. Even with these drawbacks he still managed to turn in a professional job behind the camera.

Thankfully, Line Of Duty is a return to form. Even with some minor drawbacks that plague many a DTV production, Line Of Duty is still a frenetically paced thriller that should please most action fans.

Aaron Eckhart stars as disgraced cop Frank Penny who mistakenly kills the kidnapper of a young girl. Fearing that he may have been the only lead, it is not long until the kidnappers crazed brother Dean Keller (Ben McKenzie) shows up swearing revenge.

With a race against time to find the girl, Penny must fight off against Keller as well as his fellow cops with young reporter Ava (Courtney Eaton) being his only assistance.

Line Of Duty gets off to a good start, having a decidedly 80’s vibe with its title font and a synth heavy score from the Newton Brothers. While Miller does not make it a complete 80’s homage he does include one especially memorable fight scene where Eckhart has to face off against man mountain Gary Peebles, who is dressed in a day-glo unitard, with the whole fight being scored to a suitably 80’s sounding pop song.

Like the majority of Miller’s other films, Line Of Duty has a professional sheen to it that sets it apart from many other DTV efforts. This is partly down to him employing the skills of regular cinematographer Brandon Cox.

Cox has collaborated on a number of previous Miller films such as Marauders (2016) and Arsenal a.k.a. Southern Fury (2017). Like those films, he and Miller create some terrific visuals, especially during the action scenes.

While the action now and again employs same shaky cam, it is of a generally high quality. The opening chase scene and a shootout on the streets of Birmingham, Alabama are definite highlights. Only some small uses of poor CGI detracts from the action, but this is to be expected with a low budget actioner.

There are also a couple of short but brutal fight scenes that manage to impress. Fight choreographer Michael Yahn certainly puts the cast through their paces with some extremely painful looking moves. Yahn really did carry out double duties on the film by additionally stunt doubling leading man Eckhart.

Working from a script by Jeremy Drysdale, Miller is also able to add some interesting jabs towards social media culture and broadcast news. One particular scene has both Penny and Ava involved in a car crash to only have bystanders more interested in recording it on their smart phones than actually helping them.

Drysdale’s script shows the opposing views of reporters with Eaton’s character Ava, who wants to show the news unfiltered, opposed to news anchor Ruth Carter (Dina Meyer), who is more interested in ratings than reporting the truth.

There is the odd contrivance during the plot such as Frank inexplicably allowing Ava to follow him around and report on the case. Would a veteran police officer really allow this to happen? Still, the plot moves at such a quick pace this can be overlooked. Also in order for the film to ultimately work this is one element that you really have to take in your stride.

This is quite a change from Drysdale’s last film as writer, comedy bio-pic Grand Theft Parsons (2003), although he does manage to inject some humorous situations that Eckhart has to go through on his quest to find the kidnapped girl.

Eckhart is certainly no stranger to action movies, featuring in such films as The Dark Knight (2008) and Olympus Has Fallen (2013). With them he was playing second fiddle to Christian Bale and Gerard Butler but here he is front and centre, appearing in nearly every scene.

This is one area that sets it apart from other recent Miller films, where they have featured A list stars but only in a limited capacity. This was certainly the case with Escape Plan 2, where Sylvester Stallone may have got top billing but only appeared for about 20 minutes.

Eckhart brings an everyman quality to his role reminding me of someone like Harrison Ford, where he is capable but not a superman like other action heroes and takes as much punishment as he dishes out.

Eaton’s character initially comes across as annoying and quite naive but proves to be a valuable ally to Frank, keeping him focused when needed. The character does slip into cliché but Eaton keeps her on the right side of likeable.

Surprisingly Ben McKenzie makes for a good villain. Coming across as a human terminator, it’s good to see the actor in a different type of role after playing the heroic Jim Gordon for the last five years on TV’s Gotham.

The remainder of the supporting cast do not get as much to do with Giancarlo Esposito, Dina Meyer and Jessica Lu only having limited screen time. Still they do well within the limits of their roles.

While Line Of Duty offers nothing new to the action genre it is a solidly entertaining crime thriller that further cements Miller’s status as a director to look out for.

While Line Of Duty has been afforded a cinema release it is still essentially a DTV movie albeit a high quality one. Here’s hoping that it’s only a matter of time before Miller shifts up a gear to bigger budgeted material.