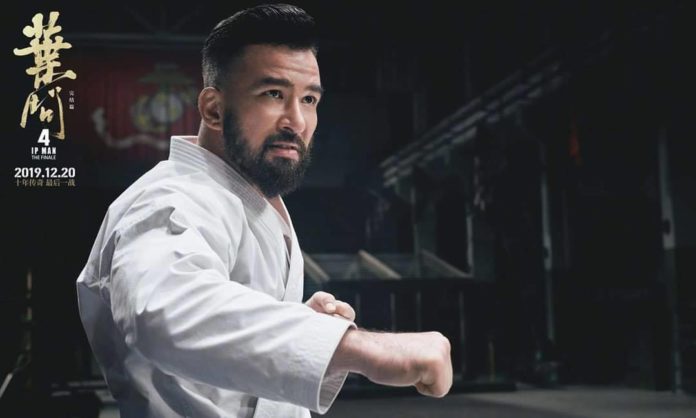 MAAC was fortunate enough to sit down with former U.S. Marine and real life Wing Chun and Kali practitioner Chris Collins about his role in Wilson Yip’s final installment of the Ip Man franchise, Ip Man 4: The Finale.

MAAC: Hello Chris! Thank you so much for taking time out of your busy schedule for our interview. First and foremost, tell us your first reaction when you got the news that you were casted in one of the biggest martial arts franchise ever in Ip Man 4? Did you feel any pressure to bring your “A” game?

Chris Collins: When I first worked with Wilson in Paradox, he told me he wanted me for the next Ip Man movie. We talked in great detail about my life and how I trained Wing Chun and was also a Marine. We even started playing chisau on set. When I met him again to hear him talk about the script I was so excited. I couldn’t believe he wrote the script that had incorporated my life. I didn’t feel any pressure for the fight scenes because I’d already passed the test of working with Sammo. Hahaha! I was just ready to start filming. It was a dream come true. I knew I’d go there and give it my all.

MAAC: Did your background as a former U.S. Marine help prepare you for the role of Colin Frater?

Chris Collins: Actually my history in the Marines provided the backdrop for the movie. I actually incorporated Wing Chun into the Marines hand-to-hand combat training at my unit of 400 marines including 5 Recon platoons. In the movie I chose 2nd battalion 5th Marines because they are the most decorated in the USMC. I was paying homage to those Marines. Vanness Wu’s character in the movie represents my real life experience, minus Bruce Lee and Ip Man! Hahaha! My character Colin Frater and Scott’s character Gunny Barton represented my obstacles in trying to bring Wing Chun into the system. The hardest part for me was trying to turn myself into a Karate man. I’m a boxer, grappler and Kali practitioner. So it was very different to my natural instincts of movement.

MAAC: What was it like to show up on set and work with such living legends as Yuen Woo Ping and Donnie Yen?

Chris Collins: Yuen Woo Ping is a legend and I wanted him to know that I was willing to do whatever it took to make the fight scene our best. He’s very old school, so you have to make adjustments according to how he wants it portrayed for the camera. Absolute genius. Working with Donnie was my favourite part. He’s so good at what he does. He’s a pioneer with so much experience and the ability to create on the spot. I learned so much from him that will 100% help me in the future. I feel so blessed for this opportunity. Truly grateful!

MAAC: How long did it take to film your fight scene with Donnie? Were there any injuries on-set?

Chris Collins: I think the scene took about a week. No injuries that were serious. My collar bone popped out getting thrown to the ground. But that’s happened a lot before. Old injury.

MAAC: You’ve worked with everyone from Sammo Hung, Wu Jing, Tony Ja, and now Donnie Yen, Yuen Woo Ping and Scott Adkins. Who’s next on your wish list? Is there anyone else you are dying to work with?

Chris Collins: Honestly I want to keep working with Donnie. I feel like he and I have a good relationship on set. He’s open to my ideas and gives me lots of mentorship. Those lessons are priceless. I also really want to continue working with Sammo Hung. I’ve made such good friends with the stunt team and I like his action design. He lets me do what I like and allows the camera to work with my strengths. Of course I want to do some work in Hollywood and bring some hardcore action to some action scenes. Another dream I hope to achieve.

MAAC: If we’re not mistaken, you and Donnie had such great chemistry working on Ip Man 4 that you were invited to take part in his next film Raging Fire. Can you give us some tidbits on your involvement with that film?

Chris Collins: That’s right. He asked me to work with him and the other actors to make them look authentic in this modern action movie. He let me add my own methods into the action sequences and actually design a lot of it. I was over the moon with how much I was able to input. Again a dream come true!

MAAC: Thank you again Chris! We would like to wish you the best of luck and success on your future projects! We can’t wait to see what you and Donnie cooked up for Raging Fire!

Chris Collins: Thank you so much! Keep your eye out for my own action movie in 2020. It’s called Ruckus Factor. It’s about my exploits in Hong Kong when I started my own academy. Lots of challenge matches. So I’m going to do my best to take what I’ve learned from all these legends into my own martial arts film. Merry Christmas and thank you for the interview.