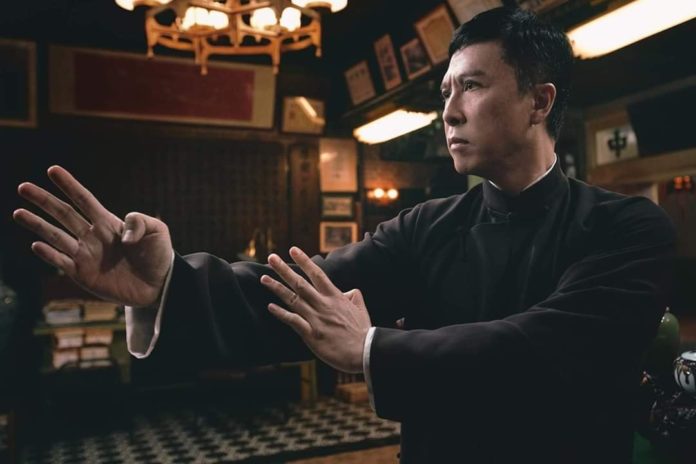 Even with a career spanning four decades, the part of Ip Man has clearly become Martial Arts superstar Donnie Yen’s most iconic role. While other actors have since played the part, such as Tony Leung Chiu-Wai in The Grandmaster (2013) and Anthony Wong in Ip Man: Final Fight (2013), it is Donnie Yen that most fans identify with the role.

First playing the part in Wilson Yip’s Ip Man (2008), it not only gave Yen a chance to display his magnificent martial arts skills but also show how accomplished he was as an actor.

After the second of the series it seemed as if Yen was done with the role, with him stating that he did not see where else he could go with the character. Thankfully he changed his mind and returned with Ip Man 3 (2015) which is arguably the best of the series. Yen stated at the time that the story just felt right hence his return to the franchise.

Although part 3 would have worked as the end to the series, Yen and director Wilson Yip have decided to return one last time for Ip Man 4: The Finale. While not the best entry of the series, Ip Man 4 is still a terrific martial arts actioner as well as a fantastic swansong for Yen’s rendition of the character.

In order for his son to be accepted to an American school, he first needs to get a recommendation letter from the CBA (Chinese Benevolent Association). That is easier said than done, as the Chairman of the CBA is Wan Zonghua (Wu Yue) who resents Ip Man for allowing his student Bruce Lee to teach Kung Fu to non-Chinese people.

In addition to this, Ip Man has to deal with racist gunnery sergeant Barton Geddes (Scott Adkins) and his Karate instructor Colin Frater (Chris Collins). The two of them have made it their personal mission to show how inferior Chinese martial arts are to Karate.

Considering they are shown to be horribly racist, they strangely do not seem to have any issue in utilizing another Asian martial art. Perhaps it was meant to be ironic. Still, this is a minor quibble in an otherwise engaging story.

The slower pace actually works to the films favour, giving Yen ample chance to show off a range of emotions throughout, before he finally gets to do what we all showed up for, kicking ass. As expected, the fight scenes are of the highest quality with his battles against Chris Collins and the mighty Scott Adkins being clear highlights of the movie.

The film has quite a melancholy vibe to it, with Ip Man facing the realization that he is coming to the end of his life. Diagnosed with cancer, he starts to look over his life and think of what he could have done better.  Ip Man decides to travel to America, seeing this as a way of securing a future for his son as he knows he will not be with him for much longer.

Ip Man 4 marks both Wilson Yip and Donnie Yen’s sixth collaboration. It is clearly a partnership that works with the two of them going on to create their best work together. As well as the Ip Man series, the likes of S.P.L. (2005) and Flash Point (2007) show the both of them at the top of their game.

Yip manages to make the most out of the admittedly contrived plot, getting good to great performances from his cast and filling the movie with exciting action scenes. The movie is guilty of making the majority of the western characters racist stereotypes, especially the main villains of the piece who are extremely OTT. Still this just adds to the overall film and makes the villains especially hate worthy, with the audience eagerly awaiting them to get their comeuppance.

Ip Man is clearly a role close to Yen’s heart, with him giving what is perhaps his finest acting performance to date. Unlike previous entries which did not waste much time to get to the action, Ip Man 4 has a gradual build up before Yen gets a chance to unleash his Wing Chun skills, with an excellently choreographed bout between him and the terrific Wu Yue being the first proper action scene Yen is involved with.

To keep fight fans entertained in the interim, there is an exciting alleyway fight between Danny Chan Kwok-kwan’s Bruce Lee and Mark Strange’s Karate Champion.

The only real issue with Yen in the role is that he is far too young for the part, with the real life Ip Man being in his seventies at this point. The filmmakers have done their best to try and make the actor look older but it is not entirely successful.

Even before starring in the first entry, Yen had agreed to star in a different Ip Man biopic. Coming from directors Jeffrey Lau and Yuen Kwai, this version would have found Yen co-starring alongside comedy superstar Stephen Chow who would have featured as Bruce Lee. Unfortunately this take on the Ip Man tale was not to be, with the production studio closing and the film ultimately being cancelled.

However, this may have been for the best as that movie could have derailed Yen from going on to team with Wilson Yip to create what is easily one of the most enjoyable martial arts film series in recent times.

One of the main selling points of this entry is the chance to see Yen square off against Scott Adkins. Their fight does not disappoint, with this being the first time in the series where it seems that Ip Man may have met his match. Adkins has great fun in the role, coming across like a martial arts version of R.Lee Ermey’s drill sergeant from Full Metal Jacket (1987), but with more racial overtones. With this and the earlier Triple Threat (2019), Adkins proves that he makes for a terrific bad guy.

The up and coming Chris Collins also impresses as Adkins underling. Having worked previously with Wilson Yip on Paradox (2017), Collins gets ample chance to show off his martial arts skills, especially during one scene where he takes on multiple martial arts champions.

Another carry over from Paradox is the impressive Wu Yue. He does not get as much of a chance to be the scene stealer this time but still makes an impression.

Bruce Lee fans may be disappointed by how little he appears here, with Danny Chan Kwok-kwan’s role mostly amounting to an extended cameo. Still it can not be denied his one on one fight with Mark Strange brightens up proceedings. After his work on the recent Redcon-1 (2018) and Avengement (2019), it is great to see Strange have the chance to show off his talents to a wider audience.

The remainder of the cast is rounded out by the likes of Vaness Wu, Vanda Lee and Hong Kong movie legend Kent Cheng who never disappoints.

As mentioned before, Ip Man 4 is not as action packed as some of the previous entries, but there is no way martial arts fans will be disappointed with what is on display. Once again employing the skills of fight choreographer extraordinaire Yuen Woo-Ping, every fight scene is expertly handled, giving every performer their chance to shine.

Unlike part 3, the majority of the fight scenes are one on one bouts, which is slightly disappointing when compared to the factory set fight scene of the last movie where Yen took on all comers.

Still, this is a minor gripe in what is still an emotionally driven end to the series which should satisfy most martial arts film fans. Yen has stated that Ip Man 4 will mark his last full on martial arts film, and if this is the case it as good a film as any to go out on.

Yen fans should not fret too much though, as he has stated that he will still be making mainstream action movies, with the upcoming Raging Fire (2020) from director Benny Chan being just one of the movies to look forward too.

Even though this will be the final adventure for Yen’s Ip Man, there is still a further entry to come, with spin off Master Z: The Ip Man Legacy (2018) getting its own sequel, which will once again be directed by Yuen Woo Ping.