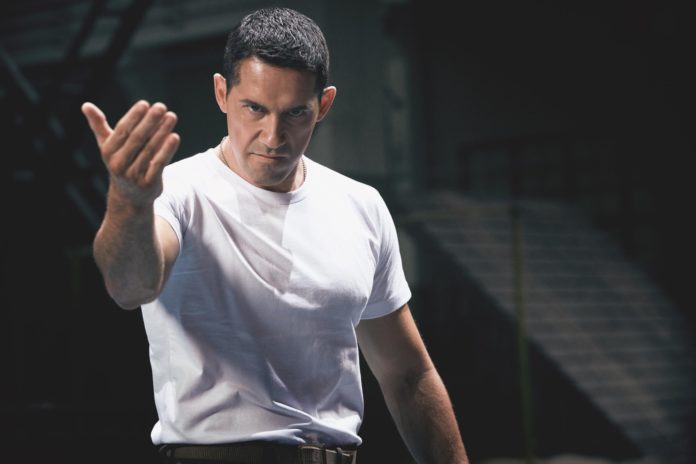 MAAC sits down with the one and only Scott Adkins (Boyka: Undisputed, Accident Man) to discuss his experience trading blows with living legend Donnie Yen in the finale of the most epic martial arts franchise of this generation, Ip Man 4.

MAAC: First and foremost, I just want to say, we here at MAAC are huge fans of your work since the Undisputed films. And we are super honored to have the opportunity to speak with you today. Can you tell us a bit about how you prepared for the role of Barton Geddes?

Scott Adkins: Thank you very much, happy to be here for you. Physically, I didn’t because I’m always training, I’m always in shape. I’m a martial artist. So really, once I got there, and figured out what it was they actually wanted, because you know, it’s a Chinese movie and the director Wilson Yip doesn’t speak much English, so I had to speak with him through a translator. To get to know what they really wanted and to grasp what sort of character they were after I had a bit of time to figure out what sort of American accent I would use and what the character was, but physically, I’m always ready to work.

MAAC: Did you have any pressure in following the footsteps of Darren Shahlavi, Sammo Hung, Mike Tyson, and Max Zhang in playing the villains in this epic saga? Especially since this is THE FINALE of the franchise?

Scott Adkins: Pressure. Yes definitely. I didn’t look at it so much as into the other villains but really just to work with Donnie Yen, who I admire so much and have done for a long time since I was 15, 16 years old watching Tiger Cage 2 and In The Line Of Duty 4. Of course, wanting to impress master Yuen Woo Ping who I’ve worked with a couple of times previously many years ago, and just to live up to the expectation of the Ip Man franchise, which, in my opinion is the best modern day kung fu franchise there is. But yeah, I always, there’s always a bit of trepidation whenever I go to Hong Kong or China because when it comes to the action, they really do work at a much higher level than what you are used to. You know, they’re really pushing hard. And you have to batten down the hatches and get ready to work really hard.

And yeah, as far as Darren Shahlavi goes, is a really good friend of mine. And such a shame to see him go all those years ago, and I have to say I was actually in line for the Twister role (in Ip Man 2) and it didn’t go my way. I’m so happy that it went Darren’s way. I’m so happy that Darren got that part because he was fantastic in it. Much better than I would have been. And it was a pecfect role for him. And I think he was excellent in that part and we will miss him.

MAAC: Yes, we definitely miss him. He was great as Twister. Speaking of Donnie Yen, fans of the genre has been dreaming of a matchup between you and Donnie for years! It was great to finally see you guys on screen together and it definitely did not disappoint. We absolutely loved it. It was epic and brutal. So congratulations on a great fight! How long did it take to film that fight? And did you guys sustain any injuries?

Scott Adkins: I believe it was seven days that we shot that fight. Not many injuries, but I remember on day number three, walking in in the morning, I didn’t know what the fight is until he told me right there and then. That’s the way they do it in Hong Kong, China, they kind of make it up as they go along. So you don’t know what you’re gonna be doing next. So I’m walking in on the morning of the third day, and my legs are so stiff because we’ve done a lot of kicking the day before, you know, I’m getting older. I’m advancing in years. And sometimes you need a bit of time. I walk in and my legs are so stiff. And then there’s a stunt double for me that’s watching all the movements, before they asked me rehearse it. Imagine walking in and I can just see my stunt double doing all these crazy kicks. And I remember thinking “oh Jesus.” It was hard work.

But you know, I’ve done a few Hong Kong movies before but I’ve never really had a big end showdown fight. Even with Wolf Warrior, which I have a big part in and we didn’t have that big showdown fight that we should have. So I absolutely wanted it. I was aware of how difficult it would be but, you know, I love the challenge and I wanted it to go longer than seven days to be honest. I wanted it to be the best ever fight if I’ve ever been in an Ip Man film, but you know, you do as the Master says and pay attention. I really wanted to learn as much as I could from Yuen Woo Ping to be honest. So I just paid attention to what I was told.

MAAC: Speaking of Yuen Woo Ping, if we’re not mistaken, you’ve work with him in Black Mask 2 back in 2002 is that correct?

Scott Adkins: Black Mask 2 probably was filmed in 2001. Then I worked on Unleashed, which is 2004 or 2005. I didn’t pay much attention back then. I mean, I was just starting out. I really just wanted to just soak it all in this time and learn as much as I could from him. He is, you know, the godfather of fight sequences. He’s as good as it gets.

Scott Adkins: I am a massive Quentin Tarantino fan. I really am. I love his movies. He’s one of the directors that I will jump out and go watch his film in the cinema every time. But I was very disappointed with the way he treated Bruce Lee. Its got to be said, I think it’s a mistake. I think somebody like Bruce Lee, you don’t do that to him. I don’t agree with it. Fans can go and watch Ip Man 4 and the Bruce Lee character has a fantastic fight. And it’s worth seeing as it put whatever was going on in Tarantino’s movie to bed. I understand that he wanted to build up the character of Cliff Booth, Brad Pitt’s character, for the audience to realize what a tuff son of a bitch he is. So have a fight with Bruce and have a friendly match and have a draw. And they will all going to think “Wow, Cliff Booth is as hard as Bruce Lee! Brilliant!” We get it. It’s to make a buffoon out of the guy. I didn’t agree with that. I didn’t like it at all.

MAAC: Yeah, we agree. It was very disappointing. But audiences can definitely wash that out of their brains by catching Danny Chan’s version of Bruce in Ip Man 4. But moving on, let’s say we put Boyka, Barton and Mike Fallon (from Accident Man) in a cage match, who you think would take it?

Scott Adkins: In a cage match? It gotta be Boyka! The most complete martial artist would eat Barton for breakfast with his simple Karate next to his American wrestling and western boxing. Boyka is gonna bust out the jujitsu. Mike Fallon, however, will probably arrange some sort of accident.

MAAC: As far as Donnie Yen, one of our personal favorite movie of his is the classic Tiger Cage 2. Which Donnie Yen flick would you say is your favorite?

Scott Adkins: Tiger Cage 2 and In The Line Of Duty 4. I love Iron Monkey. I enjoyed him very much in Once Upon A Time In China 2. The Ip Man films. But most especially Flashpoint. Ip Man of course, but Flashpoint. I love the way he brought the MMA into Hong Kong movies and make fighting very, very realistic. I think that’s Donnie Yen at his best to be honest.

MAAC. I mean, speaking of Flashpoint, we would love to see you and Donnie in a modern day action film! It would be mind blowing just thinking about it.

Scott Adkins: Yeah, I would love to do that as well. Hopefully Donnie could hook that up! Hahaha!

MAAC: As far as any of your upcoming projects, is there anything you’d like to share with the fans of what you’re working on now? We’ve read about Accident Man 2 and a Boyka tv series is in the works if that’s correct?

Scott Adkins: Don’t hold your breath on the Boyka tv series. I have no idea what’s going on there. But Accident Man 2 is very close to kicking off. So I’m very, very excited about that. We’ve come up with a good story, and I’m really excited to further the adventures of Mike Fallon. I think he is a very interesting character. I enjoy having a bit of fun in my movies. If I’m behind the scenes and have involvement with the writing, I’m always going to put humor in there. I don’t like these action films that are cold face and take themselves too seriously. I think it’s nice to have a bit of fun. And so if I’m behind the camera you can always expect that from me. So yeah, I’ve got a lot more cruise control in films these days for the most part, I think that’s why the quality has been going up.

Scott Adkins: Yeah! Accident Man, Debt Collector, Debt Collector 2 is coming out. Had a great time working with director Jesse Johnson again. I’ve got a comedy coming out called Max Cloud, which I haven’t seen yet, hopefully it’s funny. I am trying different things and trying to be a bit more creative.

MAAC: As far as dream projects, action fans would love to see you in the John Wick franchise. It would be great to get you into John Wick Chapter 4, that would be awesome. Would this be something you would consider?

Scott Adkins: It’s up to director Chad Stahelski. Chad knows where I am. I have a lot of respect for Keanu Reeves. John Wick 3 had more action than the other two. More hand-to-hand as well which I really appreciated. I gotta tip my hat to Keanu for putting in the effort and going above and beyond. Even Tom Cruise in his action films.

MAAC: Well Scott, we just want to say once again, congratulations on a great villain role in Ip Man 4! Thank you so much for your time. It’s been an honor speaking to you and wishing you the best of luck in your future projects.

Scott Adkins: Thanks a lot buddy, I really appreciate it!

Catch Ip Man 4 in select U.S. theaters this Christmas. Head on over to WELL GO USA for tickets and locations.