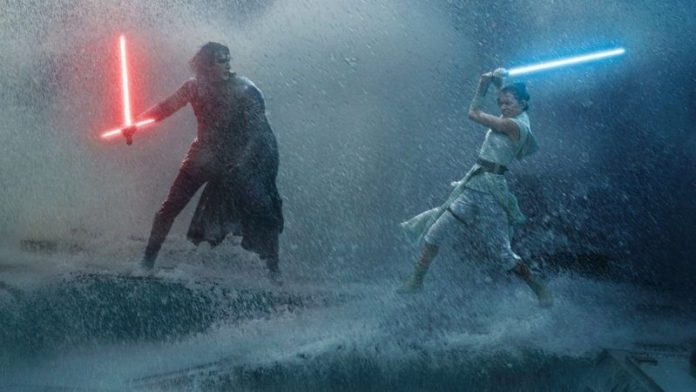 So it has come to this. Star Wars: The Rise Of Skywalker not only marks the end of the trilogy started four years ago with The Force Awakens (2015), but it is also the culmination of the 42 year old Skywalker saga that began all those years ago with Star Wars: A New Hope (1977).

After the death of Luke Skywalker (Mark Hamill), it has been left to General Leia Organa (Carrie Fisher) to lead the resistance in its final stand against the First Order.

Rey (Daisy Ridley), Finn (John Boyega) and Poe (Oscar Isaac) must work together in order to defeat new Supreme Leader Kylo Ren (Adam Driver), who is now working with the mysteriously returned Emperor Palpatine (Ian McDiarmid). With an armada of Star Destroyers at their disposal, Ren and Palpatine planning to end the Jedi once and for all.

With the odds stacked against them, it’s a race against time for our heroes to stop Ren and Palpatine’s plan. Luckily they are not alone in their fight, with some old and new allies joining them.

After Rian Johnson’s divisive The Last Jedi, JJ Abrams has taken on the daunting task of bringing closure to the beloved saga. It was Jurassic World (2015) helmer Colin Trevorrow that was originally to take the reigns but he left the project due to “creative differences”.  Having already directed The Force Awakens, Abrams was the obvious choice to replace him. Trevorrow still gets a story credit due to the work he carried out on the script before his departure.

The Rise Of Skywalker will never go down as anyone’s favorite entry of the franchise but Abrams crafts a satisfying conclusion to the trilogy and a major improvement on the previous installment. Though The Last Jedi admittedly had some interesting elements, it was ultimately a misstep. Abrams gets past this by mostly ignoring it. This works in both the films favour and to its detriment.

While Abrams keeps things moving at an increasingly brisk pace, it does feel at times as if he is trying to fit too much in, as if this is his own take on episode 8 and 9 crammed into one movie. This means that there is less character building than previous movies, with Abrams opting for a simpler and more action orientated tale. Still this is a minor issue as The Rise Of Skywalker is filled with everything fans have come to love about the series with no shortage of exciting space battles and light-sabre duels.

In regards to the action, this is probably the best we have seen in the new trilogy with Driver and Riley’s confrontation atop the ruins of the death star being a stand out. It was nice to find out that British martial artist Mike Lambert worked behind the scenes on the fight choreography.

Abrams makes sure to include a lot of nods to the original trilogy that I would not spoil here, but real fans should get a kick out of them when they appear. Some may be disappointed with his disregard for The Last Jedi but I for one was glad to see that he was mostly able to get the series back on track.

The Rise Of Skywalker additionally works as a nice send off for the late Carrie Fisher. The usage of footage shot previously before her death is not entirely successful but works for the most part. Even though she is top billed, this is more out of respect with her only having limited screen time.

The same is true of Mark Hamill, with his performance really amounting to an extended cameo. Even with little screen time, his role here is more respectful to the character of Luke Skywalker than the entirety of The Last Jedi.

Like the previous two entries in the trilogy, this is really the new cast members’ story. The main crux of the story’s focus is on the conflict between Rey and Kylo Ren. This is probably the best Daisy Ridley and Adam Driver have been in their roles since the trilogy began.

Finally we get a chance to find out more about Rey and her background, with Ridley getting to show a range of emotions with her struggle of being tempted to the dark side.

Finally Driver’s Kylo Ren does not come across as the petulant child he has in the last two films. Driver has proven himself to be a terrific actor numerous times with the likes of Logan Lucky (2017) and Black Klansman (2018), but his material in the Star Wars movies never truly gave him a chance to shine. Thankfully that is mostly rectified here, with Ren being more than just a villain.

Oscar Issac is still at his charismatic best as Poe, with him being far more integral to the story than Last Jedi. We get to find out a little of his past when he comes into contact with Keri Russel’s Zori Bliss, but nothing too deep.

In regards to Boyega’s Finn, he does feel a bit short changed in comparison to his co-stars but still does well in the role and is as always a likeable presence. The film does at least explain one aspect of his character that a number of fans have speculated since his introduction, but I would not spoil that here.

Fans of Kelly Marie Tran’s Rose may be disappointed, as she is pushed to the sidelines, with her screen time probably only amounting to ten minutes at most.

There are some new additions to the cast such as the previously mentioned Keri Russel and Naomi Ackie. Even though they are fine in their roles, their characters do feel surplus to requirements.

As well as new cast members, fans will be happy to see the return of Billy Dee William’s Lando Calrissian, who even at the great age of 81 casts quite a dashing figure. Even with limited screen time he still makes an impression.

Lando is not the only returning character from the main trilogy. While Anthony Daniel’s C3P0 featured both in The Force Awakens and The Last Jedi, it mostly felt as if he was merely there for the sake of it. Here he is an integral part of the story and features in some of the character’s best moments of the series. Of the original cast, Daniel’s is the only actor to appear in all 9 films of the main series.

Most importantly is the return of Ian McDiarmid as Emperor Palpatine. I do not want to spoil too much about his return, just to say that he is at his evil best.

Some may disagree with my review, as it would seem that The Rise Of Skywalker is dividing fans the same way as The Last Jedi. My tastes may be slightly different than others however, as my favorite of the new Star Wars productions has been Rogue One (2016). All I can say is that other than a few issues I was satisfied with how it wrapped up the main story.

Whilst this may be the end of the main saga, we all know that it is not the end of Star Wars. There has already been further films announced as well as a second series of The Mandalorian (2019) and a series focusing on Ewan McGregor’s Obi Wan Kenobi still to come.

Who knows, maybe in another 15 to 20 years we will be looking at the start of a new trilogy focusing on the exploits of an older Rey, Finn and Poe. I think it’s safe to say that Star Wars is not going anywhere.