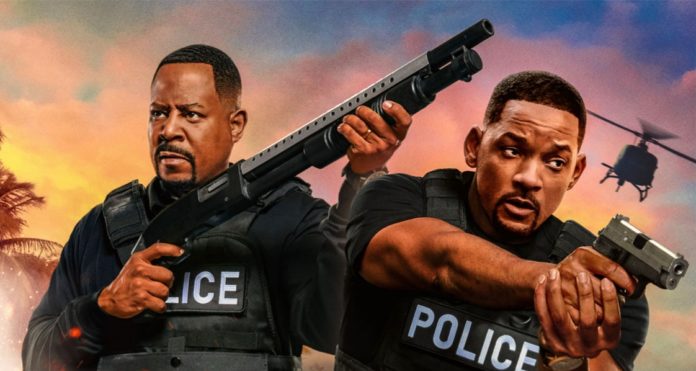 It may have taken them seventeen years, but the Bad Boys are finally back in Bad Boys for Life. Older but not exactly wiser, we find Mike Lowrey (Will Smith) and Marcus Burnett (Martin Lawrence) on the trail of a deadly cartel leader who has marked Mike and those close to him for execution. With the help of new team AMMO, Mike and Marcus follow the clues to find out that this mission may be more personal than they originally realized.

A sequel to Bad Boys 2 (2003) was originally spoke of shortly after that film’s release. At that time, it was thought that Michael Bay would return to direct. After years of development hell it seemed that a third entry of the series was only a pipe dream, with numerous writers and directors getting involved only to later leave the project.

The closest we came to a third entry was when Joe Carnahan was announced as the director but sadly this was again not to be, with Carnahan eventually leaving the production due to the delays. The emergence of spin off television series L.A.’s Finest (2019) seemed to be the final nail in the coffin of any further cinematic entries of the series.

Well, never say never. Thankfully the film was finally taken up by Belgian directors Adil El Arbi and Bilall Fallah who have done a great job of directing a hilarious and action-packed sequel. As well as having an air of nostalgia part 3 brings the series bang up to date, with a stronger focus on technology and our main characters increasing age playing an important part in the plot.

This is the largest production the directors have worked on, with their previous movies being small scale affairs. Unlike part 2, which jumped straight into the action, part 3 takes its time, building on the characters before the directors decide to fill the film with a number of shootouts, fights and car chases.

They certainly emulate the Jerry Bruckheimer style, with this feeling like a natural entry in the series and one that can sit comfortably next to Michael Bay’s previous work. Their shooting style is not as frenetic as Bay’s but they still give the film a slick look that audience have come to expect from a Bruckheimer production.

While Bad Boys for Life is lower budgeted than part 2, they still manage to impress, showing a real flair for large scale action scenes. The best of these is a high-speed chase down the busy streets of Miami that finds Smith and Lawrence on a motorbike being chased by numerous cartel members.

The bullet strewn climax set in Mexico City is another highlight and a fine piece of action filmmaking, with Bilal and Adil incorporating some interesting camera work that sets it apart from typical action movies. The only drawback to the scene is the use of some poor CGI, although not enough to ruin the film. Perhaps the $90 million budget would not stretch to better special effects.

Will Smith and Martin Lawrence have not lost any of their chemistry, with them slipping back into their roles with ease. As mentioned, there is more of a focus on their increasing ages this time. While Marcus seems to be embracing his upcoming retirement, Mike is still trying to hold on to his super cop image.

Unlike part 1 and 2, Smith now gets top billing over Lawrence, which is understandable considering how big a star Smith has become since starring in Bad Boys (1995) 25 years ago.

Smith does have slightly more screen time than Lawrence this time round, with him taking part in more of the action. He also gets some dramatic moments amongst the laughs and carnage with Mike coming to the realization that he is not the young unstoppable cop he used to be. An early incident also weighs heavily on him throughout the film.

That is not to say that Lawrence does not still get involved in the action, just not to the same extent as Smith. However, Lawrence is still clearly one of the stars of the movie getting to not only show off his comedic skills but his dramatic side. Although Lawrence has kept himself busy, Bad Boys for Life marks Lawrence’s first starring role since Big Mommas: Like Father, Like Son (2011).

There is also the inclusion of the new AMMO team, consisting of Rafe (Charles Melton), Kelly (Vanessa Hudgens) and Dorn (Alexander Ludwig). They are led by Rita (Paola Nunez) who has some history with Mike, which does not make things easy in the field.

It seems that maybe the producers are planning to spin off the franchise with these new additions. Although they all do well in their roles, they do not get a great deal to do. Other than Nunez they seem to be mostly there as eye candy, at least until the finale where they get to show off their action skills. Perhaps their roles may be expanded in any further entries.

It could be said that the villains are quite thinly drawn, with them initially coming across as typical cartel members with a grudge. As the film progresses, we begin to get more background on them and their links to Mike. Both Kate del Castillo and Jacob Scipio do well in their roles especially Scipio who gets to show off some memorable fight moves.

It would not be right to not mention the great Joe Pantoliano, who is terrific as always as the stressed- out Captain Howard. As well as being hilarious, he gives the film some heart with him conveying some words of wisdom to the struggling mike.

Although Joe Carnahan never got a chance to direct, he still gets a screenplay credit, alongside Peter Craig and Chris Bremner. I am not sure who contributed what, but it is filled with enough drama, humour and action to keep any fans of the franchise happy.

Additionally, Lorne Balfe contributes a terrific musical score that is a perfect accompaniment to the on-screen action. It is very similar to the work of Hans Zimmer which is not surprising as Balfe is a veteran of Zimmer’s Remote Control Productions.

Bad Boys for Life may have taken longer than expected to reach the screen but the final product was definitely worth the wait. It may not reach the lofty heights of part 2, but the mixture of humour and action will surely entertain not only fans of the franchise but also action cinema in general.