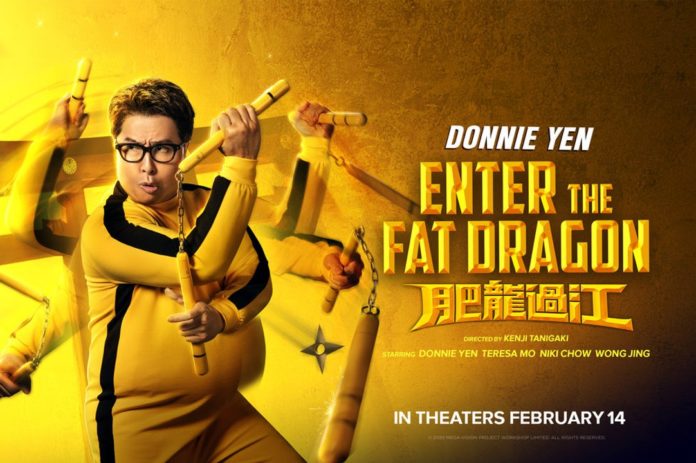 It would seem that Donnie Yen never sleeps. It was only a few months ago that he was gracing our screens with Ip Man 4: The Finale (2019) and now he has returned with an altogether different but no less enjoyable feature, action comedy Enter the Fat Dragon.

When it was first announced that Donnie Yen was working on Enter the Fat Dragon it was assumed that it would be a remake of the Sammo Hung’s classic of the same name. Although both films feature a somewhat big boned hero as the lead, they only really share a title in common.

Hung’s version was a comedic take on the films of Bruce Lee and featured him as a pig farmer who ends up going to help out at his uncle’s restaurant in the city. During his stay he has to face off against a group of local gangsters in order to save the restaurant.

Yen’s version on the other hand has him starring as Hong Kong cop Fallon Zhu, who were first introduced to whilst apprehending a group of armed robbers. Although he stops the criminals he still ends up demoted and relegated to the evidence room. Worse, his fiancé Chloe (Niki Chow) proceeds to dump him due to him constantly putting his police work before her.

Sinking into a bout of depression, Fallon comforts himself on a diet of junk food and Bruce Lee movies. 6 months pass and Fallon has now changed quite dramatically with the once athletic cop now weighing over 250 pounds. Still, a little weight gain is not enough to keep this cop down and he soon finds himself on a new case escorting a criminal to Japan.

As expected, things do not exactly go according to plan. Fallon was initially told that the suspect Yuji (Hiro Hayama)was to be returned to Japan due to a traffic violation. It turns out that he was actually a witness to Yakuza boss Shimakura’s (Laurence Chou) drug smuggling operation and the Yakuza want him silenced. Yuji quickly escapes from custody but is later found floating face down in the Tokyo River.

Fallon realizes that it must have been the work of Shimakura and would not rest until he is brought to justice. Fallon does not only have to face off against the Yakuza but go up against corrupt Japanese cop Endo (Naoto Takenaka). His only assistance is new friend Thor (Wong Jing) and his on/off girlfriend Christina (Teresa Mo) who are as much of a hindrance as a help.

Further complications arise with the re-emergence of ex fiancé Chloe who is now working with Shimakura, trying to further her acting career by appearing overseas. Will Fallon be able to bring the Yakuza to justice, get his love life back on track as well as get his weight in check? All these questions and more will be answered during Enter the Fat Dragon‘s fast paced 90 or so minutes.

I have noted that some critics are surprised that Yen has chosen to star in a comedy, seemingly forgetting that his first two starring vehicles, Drunken Tai Chi (1984) and Mismatched Couples (1985) were exactly that. Even throughout his career he has dabbled within the comedy genre, making appearances in the likes of Wing Chun (1994), Love on the Rocks (2004) and All’s Well, Ends Well 2011 (2011).

Yen is in terrific form, with Fallon Zhu being a million miles away from the heroically stoic Ip Man. Covered in layers of prosthetics, Yen is nearly unrecognisable. This is probably the most fun character Yen has played in years. At first Fallon appears to be the typical confident Donnie Yen hero until his fiancé leaves him, where he starts to doubt himself. Even then it is not long until his spirits are lifted and he’s back to the Donnie we know and love, albeit 100 pounds heavier.

Adding to the humour is the inclusion of homages to the works of martial arts legends Sammo Hung and most importantly Bruce Lee. I urge anyone try not to cheer when Yen finally brandishes a pair of nunchaku during the finale. As well as this, Yen hilariously sends up his own image, spoofing previous hits such as S.P.L. (2005), where eagle eyed viewers may spot the underrated Philip Ng filling in for Wu Jing.

Although the majority of the focus is on Yen, he is well supported by the likes of Niki Chow who gets some hilarious scenes alongside Yen as his long suffering fiancé. One particular funny scene has the two bickering where Yen mistakenly makes a fool of her acting prowess stating she only has one impression. Her reaction is hilarious.

Teresa Mo is also good fun as a restaurant owner who has racked up a considerable amount of gambling debts which she owes the local Yakuza. Like Niki Chow’s character, she too has to put up with an overweight love interest, with hers coming in the shape of Wong Jing.

Even Jing, someone not exactly known for their acting prowess, comes across as likeable and shares good chemistry with Mo and Yen. His scene where he gets high by eating a cocaine filled Tuna is especially memorable.

As well as co-starring, Jing was also a producer and writer on the film. Jing is not exactly the most refined producer/director out there, usually opting for sexist and offensive gross out humour over more restrained types of comedy shown here. Considering his involvement I was surprised that Fallon’s weight gain was not used more as a point of ridicule. Although it is addressed and does provide some humour, it is never derogatory.

Maybe working with Donnie Yen brings out the best in him as their three recent collaborations; Chasing the Dragon (2017), Big Brother (2018) and now Enter the Fat Dragon have all been excellent. Or perhaps it was the involvement of co-writers Philip Lui and Ronald Chan that made sure that Jing kept his usual predilections in check.

Whilst labeled as a comedy, there is no shortage of action, with a plethora of well-crafted action scenes peppered throughout that feature a winning mixture of comedy, expert fight choreography and hard hitting stunt work.

The best of these are a rooftop chase come fight scene in the Kabukichō area of Shinjuku, where Yen faces off against countless Yakuza members. Lastly there is the tense and exciting finale set in and around the Tokyo tower with Yen squaring off against Lawrence Chou.

Yen fans should not be expecting Tiger Cage (1988) or Flash Point (2007) levels of excellence, but the action is still of an extremely high quality and certainly on par with his more recent modern day actioners such as Kung Fu Jungle (2014) and Big Brother (2018).

The high quality of the action is understandable as it not only features regular Yen collaborator Kenji Tanigaki at the helm, but also has Yen and his action team working as fight choreographers. Tanigaki and Yen’s partnership goes all the way back to Yen’s television days, working together on Fist of Fury (1995).

Whenever the two partner up you can usually guarantee explosive results. The likes of Legend of the Fist: The Return of Chen Zhen (2010) and Wu Xia (2011) are fine examples of their work together and it’s great to see Tanigaki being put in the director’s chair of such a mainstream production.

He is assisted by co-director Aman Chang, who has carried out similar duties on other Wong Jing productions like From Vegas to Macau 2 (2015) and Chasing the Dragon (2017). It would appear that Chang’s involvement was to make sure the production went smoothly.

Although I am unsure how their partnership worked on set, Chang and Tanigaki have created an extremely fun and engaging action comedy that not only features Yen in one of his most entertaining roles outside of the Ip Man franchise but further wets the appetite for what Yen has in store in the upcoming Raging Fire (2020).