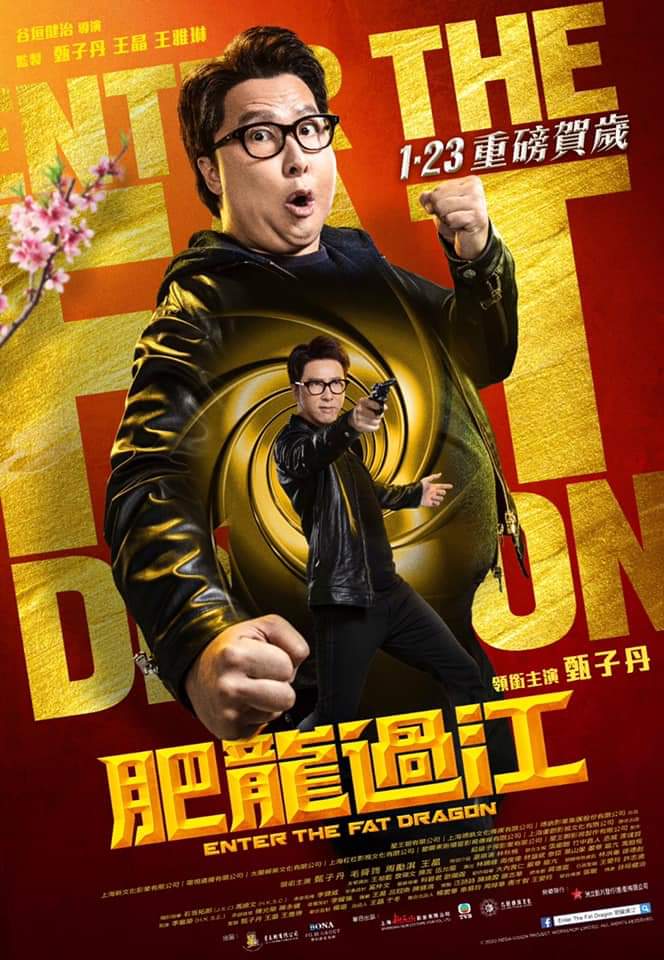 UPDATE: Have a look at the U.S. Trailer for Enter The Fat Dragon!

Synopsis: Fallon Zhu (Donnie Yen) is a Hong Kong police officer. In the eyes of the public, he is an agile fighter with a high crime detection rate, a police role-model. Unfortunately, his fiancée Chloe (Niki Chow) dumps him in half a year’s time, his endless intemperance transforms him into a +200 pounds being.

His superior, Superintendent Huang, puts him in charge of a routine mission to escort a convict to Japan, so he can lose some weight and pressure as a side-plan. However, a series of mishaps befall him in Japan. He loses all of his belongings, and above it all, he loses the convict in his custody. His luck turns when he encounters Thor (Wong Jing), a fellow Hong Kong citizen who helps him out of his ordeal.

But the respite is short-lived, his convict suffers a mysterious death. In order to complete his mission, Fallon and Thor join forces to solve the puzzle. To everyone’s dismay, troubles continue to snowball, even the people around Fallon are being dragged into the mess. Fallon is determined to uproot the gang, regardless.

UPDATE: Check out the Trailer and Poster!

UPDATE: Donnie Yen is taking it back old school as he is currently filming an ‘SPL’ parody scene paying homage to the famous alleyway fight against Wu Jing. However, stepping into Jing’s role is Yen’s ‘Chasing The Dragon’ co-star Philip Ng!

This is pretty much the closest thing we will ever get to seeing Yen in a proper ‘SPL’ sequel. As you can see, the man does not age at all.

Stay tuned for the Trailer for Enter The Fat Dragon soon!

UPDATE: ENTER THE FAT DRAGON has officially begun production. Check out the on-set images below featuring DONNIE YEN and KENJI TANIGAKI. Best known as an action choreographer on such fan favorites as ‘SPL’, ‘Flashpoint’, and the upcoming ‘Big Brother’, this time Tanigaki is the main man behind the camera as ‘Fat Dragon’s director. Serving as producers is Yen himself along with Wong Jing (Chasing The Dragon).

UPDATE: Leading man DONNIE YEN recently spoke to the SOUTH CHINA MORNING POST revealing that the film is not necessarily a remake. The plot will see Yen playing “a great fighter who becomes overweight as a consequence of emotional issues, before lending his martial arts prowess to an unlikely career in crimebusting”.

Producer WONG JING stated: “The title doesn’t really matter. Many film titles could be recycled for new projects. A True Mob Story (1998), which I made with Andy Lau, also shared the Chinese title of the Brandon Lee film Legacy of Rage (1986).”

‘Enter The Fat Dragon’ is expected to start shooting by the end of the year.

Director/Producer WONG JING (Chasing The Dragon) and martial arts superstar DONNIE YEN (Ip Man) is set to team up once again in the remake of ENTER THE FAT DRAGON.

The classic 1978 martial arts comedy starred Sammon Hung as “Lung, an apprentice pig farmer sent to the big city to help his family, only to find himself confronted by a gang of thugs trashing the grocery stand where he works. Lung’s hero is Bruce Lee, and he’s carefully studied Lee’s martial arts techniques; however, he also weighs a good hundred pounds more than Bruce, which makes him look like a less than threatening opponent.”

Yen will take on the role in a full on fat suit, which he has done before in the hilarious 2015 commercial below.

Yen channeling Sammo channeling Bruce Lee…in a FAT SUIT? This should be fun. Count me in.