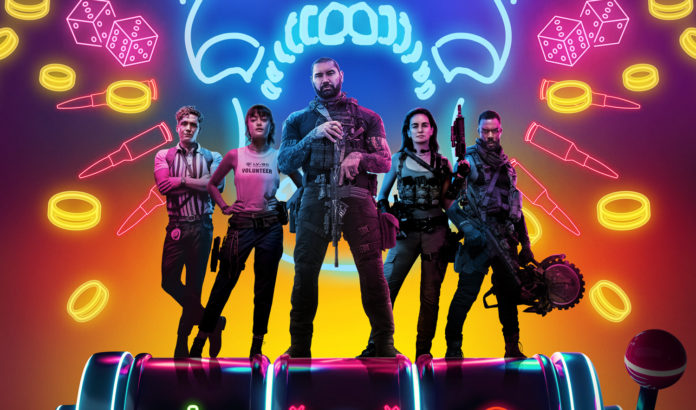 UPDATE: The full Trailer for Army of the Dead is here!

UPDATE: Have a look at the Poster for Army of the Dead!

UPDATE: Check out the Teaser Trailer!

UPDATE: Check out official images from Zack Snyder’s Army of The Dead below!

Synopsis: Following a zombie outbreak in Las Vegas, a group of mercenaries take the ultimate gamble, venturing into the quarantine zone to pull off the greatest heist ever attempted.

Director Zack Snyder (300, Justice League) is back behind-the-camera for the zombie actioner Army of The Dead.

With a budget of $90 million, the project was initially planned as a sequel to Dawn of the Dead. The film is set in a quarantined Las Vegas during a zombie outbreak. In the middle of all the chaos, a father hires a group of mercenaries to help him break into the containment area and find his missing daughter.

According to Win, who has a black belt in jiu-jitsu and a wushu champion, the film will include plenty of violent action ala The Raid. During a recent interview with Whistlekick Martial Arts Radio, Win expressed her love for The Raid and the type of action we can expect for Army Of The Dead:

“I really appreciate what THE RAID did for the industry part of it, because I’m personally a fan of that violent style of fighting on camera and it’s the most fun to be able to perform. I really like THE RAID for those reasons. I feel like it opened up this genre of real violent, long takes of fighting and, just as an actor, a performer, it’s so fun to be able to do that. I’m glad that it’s becoming a little bit more mainstream and you get to experience that, because there’s nothing like it on set when you get to do a whole sequence and you get to live it fully all the way through. Maybe 20 kills or something, as opposed to punch-punch-cut, punch-kick-punch-cut, slash-slash-cut. It’s like in wushu. I would do a minute and 30 second routines, so I like being able to do the whole thing and getting that adrenaline rush, and you really feel it in your bones. So I like that because of THE RAID.”

“On my last project (Army Of The Dead), I got to do a couple of really long takes of things like that, and there’s just nothing that compares to it. Especially because you need more people for longer takes too, and with more people who are just as involved as you are, there’s this energy that just can’t be replicated when you get to live through the whole thing like that. I’m pretty excited about that, and I’m pretty excited there was a lot of weaponry in it, like gun handling that we got to do training for. Not a whole lot has been released about story or details yet, so can’t talk too much about it, but the kind of training that we got to do was something new for myself. We had a couple SEALs going over rifle and pistol work with us, and anything involving zombies is just going to be super fun. Probably one of my favorite experiences on that was, in one of the sequences, I don’t know how much I’m allowed to talk about yet, but it’s nice discovering some UFC fighters that were there and I had no idea they were there. But zombies is just such a genre that’s fun for people. Why wouldn’t you be there if you could be there? So, it was really neat to me. Yeah, a lot of fun. I hate how vague I have to be.”

Army of The Dead will be release later this year only on Netflix.