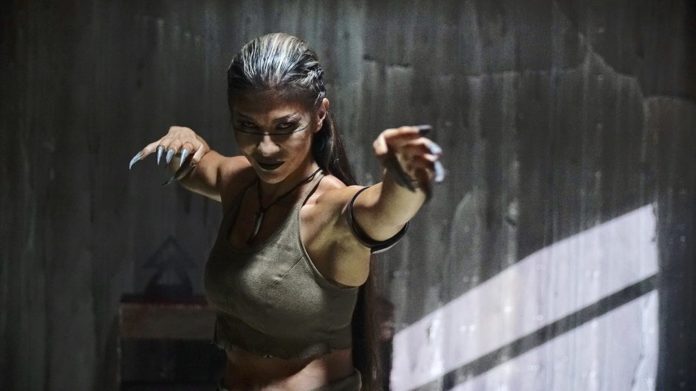 MAAC has a quick chat with Blood Hunters’ Mayling Ng, who can also be seen in the excellent Debt Collectors alongside Scott Adkins.

MAAC: Can you tell us a bit about your character in Blood Hunters?

MAYLING NG: I play Queen Maya the Aswang with a vengeance for Gabriella’s head.

MAAC: Considering that you are a Black Belt and a Fitness Champion, I’m pretty sure you are always physically ready for any role you come across. But did you do any other type of training specifically for your role in Blood Hunters?

MAYLING NG: Not really, I was only confirmed a week before and had a few hours rehearsal day before I arrived to the set to shoot.

MAAC: How would you compare the action in Blood Hunters to something like Lady Bloodfight?

MAYLING NG: Very different! I had long prosthetic claws and wore a skirt so I was quite limited but we did the best we could.

MAAC: Was it a big adjustment going from a big budget production like Wonder Woman to a smaller independent film like Blood Hunters?

MAYLING NG: Yes, but I had lived in the Manila for a year a few years before so even though it was a low budget movie I know the filipinos would look after me and Sara and Vincent are the best, super professional.

MAAC: We know you probably can’t say much, but we have to ask, what character are you portraying in the highly anticipated The Suicide Squad? Can you give us a little something about your experience working with the cast and director James Gunn?

MAAC: We know you just worked with the fantastic Scott Adkins on Debt Collectors (The Deft Collector 2). Who’s on your bucket list as far as action stars that you would love to work with next?

MAYLING NG: The Rock, I want to take him on!

MAAC: If “Maya” (from Blood Hunters) faces “Svietta” (from Lady Bloodfight) in the Kumite, who comes out alive?

MAYLING NG: (SPOILERS!!!) Well probably Svietta as she still lives to see another day after 3 fights in the Kumite and Maya doesn’t last 1 fight in Blood Hunters.

MAAC: With the current coronavirus situation and everybody spending more time at home. Can you give us your top 5 action films to watch during quarantine?