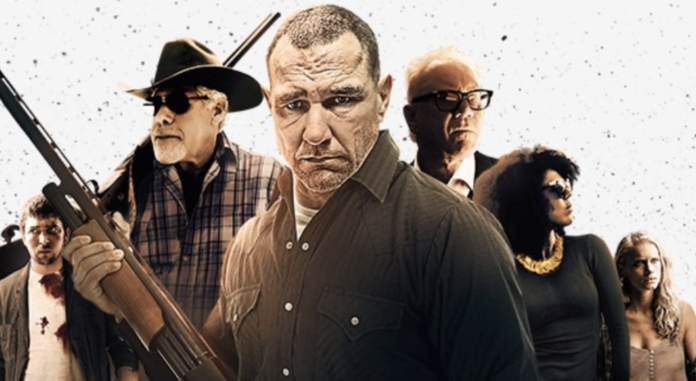 I had first become aware of director Scott Wiper through the film A Better Way to Die (2000) which he not only wrote and directed but starred in too. It was clear that the film was made on a limited budget but it showed that Wiper had a nice visual style and a good eye for action.

With that I thought he would surely have quite a career as a director in the DTV market but it would be another seven years before he would direct another feature. He finally followed up A Better Way to Die with WWE’s The Condemned (2007), another entertaining albeit low budget actioner that showed that he still had a keen eye for action.

The Condemned wasn’t exactly critically acclaimed which led to poor business at the box office, which was a shame as it didn’t deserve such a fate. Of course it wasn’t perfect, with Wiper employing the dreaded shakycam during some of the action scenes, but as a throwback to the 1980’s style of action movies it did its job.

This may seem a step down, directing the third part of a DTV franchise, but The Marine actually turned out to be one of the better entities in the series with a great villainous turn from Neal McDonough as well as establishing wrestler Mike ‘The Miz’ Mizanin as an action star. It was enough of a success to spawn three further sequels with Mizanin returning for each entry.

This brings us to Wiper’s latest, The Big Ugly, which is his first director’s credit in seven years. Like his previous movies it is another low budget feature, but Wiper doesn’t let that get in the way of him telling the story.

Other than Neelyn getting drunk and making a commotion in the bar, the deal pretty much goes without a hitch. Unfortunately after that things begin to go downhill. The following morning Fiona is missing and the last person she was seen with was Preston’s no good son Junior (Brandon Sklenar).

Both Harris and Preston want to deal with the situation as quietly as possible so their business deal can go through, but Neelyn has other things on his mind, clearly wanting some answers of what happened to Fiona and perhaps some revenge.

Like his previous ventures, Wiper also wrote the script of The Big Ugly. The story is pretty straight forward but he injects a lot of nice character touches as well as giving his characters some memorable dialogue.

There aren’t any real clear heroes in the film. The closest we have is Neelyn, but even he isn’t exactly clean, with one of the first acts we see him carry out is murdering an old friend on the order of Harris. Still in comparison with the venomous Junior he is almost a saint.

Wiper’s script put me in mind of a number of Westerns of the past. Perlman’s character was very reminiscent of Burl Ives from The Big Country (1959), with both knowing their sons are no good but still feeling the need to stand by them due to blood.

The plot also put me in mind of John Sturges underrated Last Train From Gun Hill (1959), where in that film Anthony Quinn has to go against friend Kirk Douglas after his son is involved in the murder of the latter’s wife. The relationship between McDowall and Perlman was very reminiscent of that of Douglas and Quinn.

Like many old time Westerns, Wiper fills his film with some beautiful visuals. Working with cinematographer Jeremy Osbern, they take full advantage of the small town setting and its surrounding forests, giving the film a professional sheen not seen in many similar DTV efforts.

Action fans may be disappointed as this is much slower paced than any of Wiper’s previous films. In many ways it is more a thriller than an action movie, but there are still a few small scale fight scenes and shootouts peppered throughout to keep things interesting.

Another area Wiper gets right is the soundtrack. So many DTV movies use background music from bands that no one has ever heard of, and it just shows up the fact that the production’s budget couldn’t stretch to recognizable artists. That is not the case here with music from the likes of The Jam and Exile used throughout. The score from Alex Heffes additionally adds to the overall mood of the film and is a fine accompaniment to the on screen drama.

Of course, it wouldn’t matter how good the visuals and music were if you don’t have a competent cast.

Some would say that Vinnie Jones isn’t exactly someone you would classify as a great actor, but when directors play to his strengths, he can be perfectly utilized. The best examples of this can be seen in his early work with Guy Ritchie, Lock Stock and Two Smoking Barrels (1998) and Snatch (2000).

As well as those, he made for a great villain in The Condemned which found him working with Wiper for the first time. Many of Jones’ previous films normally have him as a supporting player or as the main villain, but here he is given the rare chance to be the lead. Not only that but he plays the hero (or as close to a hero as this film gets) and gives possibly one of his best performances to date.

Even though we see Neelyn committing some terrible acts during the opening, Neelyn is still quite a likeable character and it is made clear how much he cares for Fiona. One of Jones most likeable qualities is the fact that he looks like a man that has lived. I don’t mean this in a disrespectful way, but unlike other so-called Hollywood tough guys, Jones looks as if he has seen his fair share of fighting. Surprisingly, Neelyn isn’t the unstoppable tough guy you would expect from the trailers, with him taking as much punishment as he dishes out. This was somewhat refreshing and set The Big Ugly apart from your usual actioners where the hero takes on all comers with nary a scratch.

Perhaps events in Jones’ own life played a part in his performance, with his own wife Tanya passing away last year to cancer. The Big Ugly is dedicated to her memory.

Jones is ably supported by the always great Ron perlman and Malcolm McDowell. The two of them work well with each other and make their unlikely friendship believable. This is actually one of McDowell’s better roles of recent memory and even with limited screen time makes a great impression.

Also noteworthy is Brandon Skelnar as Junior. He is one of the most pathetic and despicable villains I have seen in some time. Junior is the kind of character that thinks he is entitled to anything he wants and that woman should just drop at his feet. As soon as you see him talking to Fiona you know that no good can come from it.

Junior is the type of character that makes you angry whenever he is on screen and actually makes you want to see them get their comeuppance, and Skelnar does a great job with this.

Both Nicholas Braun and Leven Rambin do well as two young lovers who end up helping out Neelyn get to the truth. I was disappointed how little the excellent Bruce McGill was used. Seemed strange to hire such an accomplished actor as McGill to only have him appear as Perlman’s sidekick with only a handful of lines.

The same is true of Joelle Carter of Justified (2010) fame who only shows up fleetingly as a local bar owner who gives Neelyn some information. I expected her character to reappear as the film progressed but was sadly disappointed.

All in all, The Big Ugly was much better than I expected it to be. While the slow pace may turn some action fans off, they should still stay for the ride as the film still has some great performances and bloody violence. Let’s hope that it’s not another seven years until Wiper steps behind the camera again.