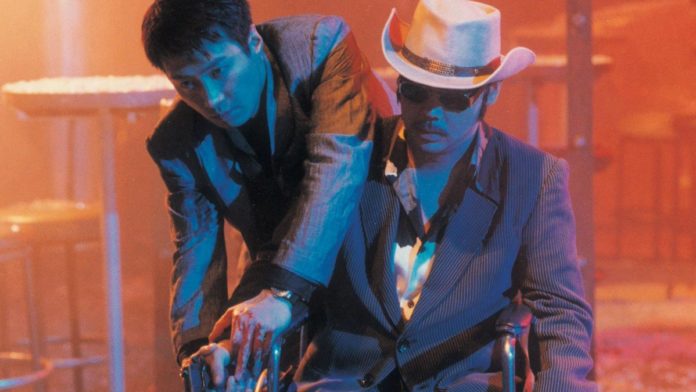 Fantasia 2020 has been a great market for new releases this year. In amongst these they have also had the good foresight to include some classics.

While this year’s festival has seen the Western release of Johnnie To’s latest Chasing Dream (2019), they are also showing a classic from his back catalogue, with heroic bloodshed homage A Hero Never Dies (1998).

As well as being the first film To directed for Milkyway Image, the company he formed with Wai Ka-fai, it was also a real turning point in To’s career as a director. Sure he had directed and produced his fair share of action movies previously, but A Hero Never Dies was a clear change in style and more in line of what we have now come to expect from To.

Both Jack (Leon Lai) and Martin (Lau Ching Wan) are members of two rival Triad gangs. While both gangs are in the midst of a gang war, Jack and Martin still manage to form some kind of friendship (or at least a friendly rivalry).

As much as the two share this friendship, they realize that due to their chosen careers that they will probably end up having to kill each other. It isn’t long before this becomes a reality, with the two of them involved in a failed assassination attempt that leaves both of them physically damaged, one worse than the other.

Unfortunately for them, the bosses of each of their gangs don’t share the same honour and loyalty inherent in our leads. They end up joining forces and leave Jack and Martin for dead. Through some hardship the two fight back and decide to get revenge on those who betrayed them.

Amazingly, upon its original release A Hero Never Dies turned out to be both a financial and critical disappointment, with many not knowing what to make of something so different from the typical HK fare. However, as time has passed it has rightfully been recognized as a classic of the genre and one of To’s best.

Like the best heroic bloodshed films, A Hero Never Dies is filled with the typical themes of loyalty and honour, so much so in fact that it almost seems comical. Still, To is able to create a suitable atmosphere where all this seems perfectly normal.

His hard boiled characters are the types that can only be found in film noir. They are the kind of people that would one minute try and kill each other only to later enjoy each other’s company over a drink.

The film is bolstered by some terrific performances. Now Leon Lai has never been the best actor, with him coming across as somewhat wooden in many of his roles. Still To utilizes him well here, using his limitations as an actor to the films advantage, with Jack coming across as quite intense with limited emotions.

Still it wouldn’t matter how good an actor Lai is as he would still be overshadowed by Milkyway regular Lau Ching Wan, who as expected steals the show as the instantly likable Martin. While it isn’t his most memorable performance from his collaborations with To, Lau still manages to imbue Martin with enough charisma and humour to make him standout.

The cast is also filled with the usual Milkway/Johnnie To faces, with the always great Lam Suet making his obligatory appearance.

Behind the camera, To manages to create a dark and tense atmosphere with the threat of sudden violence always around the corner. When this violence comes, it’s in the form of some spectacularly visualized shootouts choreographed by action director Yuen Bun.

The best of these is an ambush in a Thai hotel where both Leon Lai and Lau Ching Wan have to fight their way out whilst at the same time face off against each other and the final nightclub set shootout.

Like so many others that worked on the production, Yuen Bun was another Johnnie To & Milkyway Image regular, choreographing the action for the likes of Loving You (1995), Beyond Hypothermia (1996) and Expect the Unexpected (1998), all of which come recommended.

The wonderful cinematography of Cheng Siu-Keung and the accompaniment of Raymond Wong’s excellent soundtrack additionally set A Hero Never Dies and its action scenes apart from any other heroic bloodshed films being made at the time.

Cheng Siu-Keung continues to work alongside To to this day with him working on some of the best films of his career, with the likes of PTU (2003), Mad Detective (2007) and his most recent venture Chasing Dream (2019).

In regards to Raymond Wong’s music, he is somewhat guilty of copying Hans Zimmer’s score for Broken Arrow (1996) but it matches the on screen action so well you won’t really care.

In matter of fact, Wong had a habit of revisiting this, as his score for The Longest Nite (1998) which came out earlier that year is extremely similar. Still, like A Hero Never Dies, it plays alongside the action beautifully.

It is great that Fantasia 2020 has chosen a film like A Hero Never Dies as part of its lineup. Even at 22 years old it still holds up with any recent gangster thrillers coming out of China, or anywhere else for that matter.

It also works as a terrific starting point if you have come late to the works of Johnnie To. From here his films would only get better, with him going on to direct crime classics like Running Out of Time (1999), The Mission (1999), Fulltime Killer (2001) and Exiled (2006) just a handful amongst them.