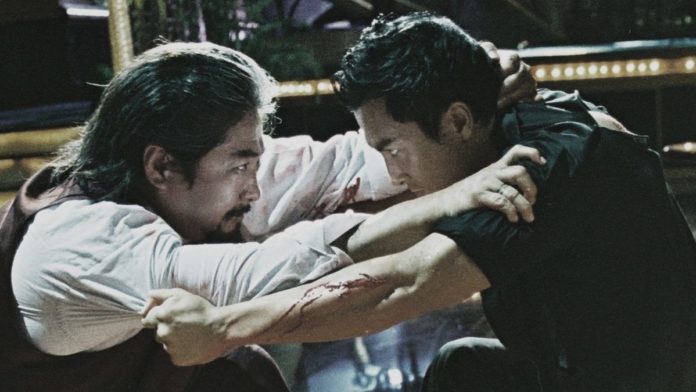 While there are only a handful of martial arts movies showing at the festival this year, the good people at Fantasia 2020 have made the great decision to include the outstanding SPL (2005) as part of their lineup.

SPL was a pivotal film for Donnie Yen, revitalizing his career after a series of supporting roles that were frankly beneath his talents. Only Tsui Hark’s Seven Swords (2005) which he appeared in the same year as SPL stood out, but even then he wasn’t the lead.

That all changed with SPL where he was once again back as the main focus, proving without a doubt that he is one of the most talented martial artists working in Hong Kong cinema.

Not only this, but SPL marked Yen’s first collaboration with director Wilson Yip. This partnership has not only gone on to spawn further action classics like Flashpoint (2007) and Dragon Tiger Gate (2006). Most importantly is the Ip Man franchise, which has to be one of the greatest martial arts series of the last 20 years.

Even with all those classics that followed, SPL still stands out, showing both director and star at the top of their game.

There were a couple of standouts for Yip pre-SPL, such as the cop drama Bullets Over Summer (1999), which featured a mixture of great performances, violent action and a tension filled plot. Romantic drama Juliet in Love (2000) even got him a nomination for best director at the Hong Kong film awards.

Even then he would follow them up with forgettable features like 2002 (2001) and The Mummy, Aged 19 (2002) which didn’t exactly receive great reviews. SPL changed all this, going on to receive great critical acclaim.

Working with cinematographer Lam Wah-chuen, Yip gives proceedings a stylish but gritty look that reminded me somewhat of the works of Michael Mann.

Yip’s screenplay, which he co-wrote along with Szeto Kam-Yuen and Ng Wai-lun, makes sure that the characters appear like real people. There aren’t any perfect people in SPL, but they do at least feel like real people, well at least most of the time I don’t think the majority of “real” people could pull off the moves of Yen et al.

Speaking of Yen, he gives a multi layered performance as Inspector Ma, as well as getting multiple chances to show off his awesome fighting skills.

As the plot develops it becomes clear that Inspector Ma isn’t the out and out hero that we have come to expect from the genre. Sure he is heroic and clearly a badass, but he is willing to go beyond the law when he feels it necessary.

In some respects, Yen isn’t even the film’s main character. As the film opens, a great deal of focus is put on Simon Yam’s Inspector Chan Kwok chung and his dedication to bring down notorious Crime Boss Wong Po (Sammo Hung).

Whilst Chan is transporting a witness to court, their car is rammed. The other car is being driven by Jack (Wu Jing), a merciless killer in the employ of Wong Po. Before Chan even knows what hit them, Jack has executed the witness.

Although Chan survives the attack, he ends with a shard of glass embedded in his head. After its removal he is told by doctors that during the operation they discovered a tumor that will eventually kill him.

With this prognosis Chan becomes more ruthless in his attempts to capture Wong Po, with him willing to go to extreme measures in his quest. As time passes Chan’s tumour gets worse with him eventually having to retire.

This is where Inspector Ma Kwun (Donnie Yen) comes in. Transferred from another station, he has been assigned to replace Chan and take over his team. In the meantime he will work alongside Chan so the team can get to know him.

During this time Chan’s team come into possession of a video tape that shows Wong Po torturing an undercover officer. Po continually beats him on the tape before one of his underlings finishes him off. Unbeknownst to Inspector Ma, Chan and his team decide to alter the tape so that it appears Po committed the murder.

This action leads them all down a rabbit hole with no clear way out. Ma ends up unwillingly having to go along with their scheme. Later Ma has to race against time after assassin Jack is unleashed to silence Chan and his team once and for all.

SPL plays very much like an updating of Yen’s earlier Hong Kong actioners Tiger Cage (1988) and In the Line of Duty 4 (1989), with its mixture of acrobatic fight scenes, shocking violence and corrupt cops.

In many ways it could have played as another part of either of those series, as each entry was stand alone. Coincidentally this is something the SPL series has carried out, with each of its sequels having nothing to do with the last, other than sharing some of the same cast and crew.

One area that sets SPL apart from earlier Hong Kong action movies is how long it takes to get to the action. In the past, there would have been a need to pack the film with fight scenes from the get go.

Instead Wilson Yip takes his time, giving us a chance to get to know and care about the main characters. He ratchets up the tension until unloading the screen with a series of no holds barred fight scenes, with the awesome action choreography of leading man Donnie Yen shining through.

What sets Yen’s choreography apart from some of his earlier films is his incorporation of modern MMA style techniques.The standout set piece is the alleyway fight between Yen and henchman Wu Jing, where there’s a spontaneity to their moves. According to Donnie Yen, part of this fight was improvised which clearly plays a part in its speed and brutality. Unsurprisingly Donnie Yen won best Action Choreography at the 25th Hong Kong Film Awards.

Wu Jing’s screen time is limited, with him essentially showing up to kick ass. There isn’t a great deal of character development for Jack. Apparently there was more to his relationship with Wong Po but this ended up cut from the completed film.

Even with that in mind, Jing is outstanding, with his character being a deadly foil for our heroes. Similar to Yen and Yip, SPL was a career changer to Jing. He had mostly been working in television with the odd film roles.

It was clear from these roles that Jing clearly had talent but it was SPL that truly gave him a chance to shine. A decade later he would return to the SPL franchise, taking lead duties in sequel SPL: A Time for Consequences (2015) before going on to star and direct the highest grossing Chinese film ever made with Wolf Warrior 2 (2017).

While Jing is a clear standout, this isn’t to negate the quality work from the rest of the supporting cast. As mentioned, Simon Yam in many ways could be classified as the main character, with Chan being the one that is the catalyst to the main plot. Yam never disappoints, with him able to play it all. He makes his character likeable and sympathetic even though he is technically corrupt.

The rest of Chan’s team are the same. Even when attempting to murder a criminal, we can understand there reasoning, even if we don’t agree with what they are doing. Of the team, character actor Liu Kai-chi manages to impress as Lo Kwun-wah, in what was an Award Nominated role.

Lastly there is the legendary Sammo Hung, appearing in a rare villainous role. It is one of the better roles of Hung’s later career. While Wong Po is clearly a villain, he is still shown to be a family man who loves his wife and newborn son.

Hung was quite large at the time, but even this doesn’t slow him down when it comes time to unleash the moves. As expected, the beatdown between him and Yen is outstanding, with it only slightly paling in comparison to the Yen and Jing fight that came minutes before.

Now 15 years old, SPL is still hard to beat. Its larger scale sequel and third entry Paradox (2017) are worthy action films in their own right but still don’t live up to the original. The closest is probably Yip and Yen’s own Flash Point (2007), which is essentially an SPL movie in all but name, but even then SPL still slights pips it to the post.

I’m sure many martial arts fans have seen it by this point, but to those that haven’t, Fantasia 2020 is the perfect chance to catch up on a bonafide classic.