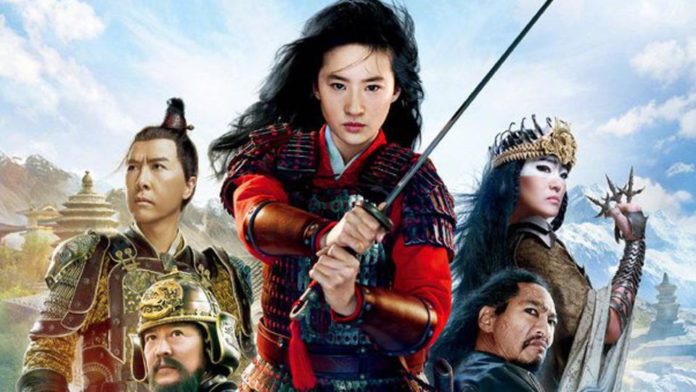 It’s finally here. After what seems like forever, Disney’s live action remake of Mulan is eventually upon us. After its release date had been pushed back numerous times due to the current Covid-19 pandemic, Disney made the somewhat controversial decision to release Mulan straight to its streaming platform Disney+. Controversial in that they decided to slap it with a £19.99 ($29.99 in the U.S.) asking price on top of the subscription fee.

Many baulked at shelling out so much for something they felt should have been included within their subscription. The big question was: is it worth it? The answer is that it really depends on what you are looking for. Those expecting a competently made fantasy adventure will get what they were expecting. However martial arts fans who purchased Mulan for a chance to see legends like Donnie Yen and Jet Li in action will be sadly disappointed.

While it does remove a good deal of the more fantastical elements of the animated original, this retelling of Mulan essentially follows the same story. In a period of war, the Emperor of China (Jet Li) issues a decree that one male from every army must serve in the Imperial Army in order to protect the country from the evil Böri Khan (Jason Scott Lee).

War veteran Hua Zhou (Tzi Ma) is willing to go to the front and fight although he knows that he isn’t physically up to the task. His rebellious daughter Hua Mulan (Liu Yifei) decides to take the place of her elderly father knowing that if he was to fight it would be a death sentence.

Mulan joins the army under the guise of Hua Jun, a male soldier. Whilst there she is trained by the tough Commander Tung (Donnie Yen) and befriends fellow conscript Honghui (Yoson An). Like the best martial arts films, her training comes in a series of montages where she grows in strength.

She will need this strength when she will have to face off against Böri Khan and Xian Lang (Gong Li), a witch with shapeshifting powers.

Working with her largest budget yet, New Zealand director Niki Caro has crafted a beautiful looking but humourless adventure. Many have decried the removal of fan favourite Mushu, the sassy dragon voiced in the original by Eddie Murphy, who was the main source of amusement.

While I do agree with Caro’s statement that a character like Mushu had no place in this retelling of the tale, there was no reason to make the entire film so po faced. Other than the odd one liner or exchange between the characters, the film is nearly devoid of any laughs.

Of course this can’t all be laid at the feet of Caro, as the four writers of the movie didn’t see fit to add in these elements. Now I wasn’t expecting a laugh riot, as the film is still about war, but some levity would have been appreciated, especially when one considers the level of humour employed in the original.

I also find it amusing that Caro and the writers commented one of the reasons behind the removal of Mushu was that this telling of Mulan’s story would be a more grounded affair, yet we still have Gong Li’s Witch using magic powers to change shape and fly.

That isn’t to say that the telling of the story is a complete bust. The dramatic elements are there and Caro has filled the film with talented performers, even if they are restricted in what they do. Working with cinematographer Mandy Walker, they fill the film with some exquisite visuals that not only beautifully capture the on screen action but perfectly capture the excellent work of costume designer Bina Daigeler and production designer Grant Major.

Perhaps not as well known in the West as she is in China, Yifei gives an impressively physical performance as Mulan, giving her fight scenes a level of grace.Reportedly she carried out 90% of her own stunts. The only real problem is her attractiveness, in that in no way would you ever mistake her for a man, so some suspension of belief is required.

Dramatically, her most effective scenes are shared with Gong Li, where Li’s Xian Lang tries to tempt her to the dark side. Sure, we know there is no chance she will take Li up on her offer but it created a sense of conflict between the two and gives some insight into Li’s Witch.

In regards to Li, she does more with her character than is on the written page. While she is clearly more powerful than Jason Scott Lee’s Böri Khan, she is somehow beholding to him. It is an interesting part of her character that should have been delved into further, with her seemingly being a villain more through circumstance than opportunity.

No matter how good these two are though, what martial arts fans undoubtedly want to know is, how good are Donnie Yen and Jet Li’s performances.

As a fan of Yen, any appearance from him is appreciated and he never disappoints. He makes for a stoic Commander Tung, forming a kind of fatherly bond with Mulan. While it is great to see Yen in such a lavish production, the filmmakers make the unwise decision to only feature him sporadically during the film’s action scenes, with him never getting a real chance to cut loose.

Still, Yen fares better than Li, whose role is really no more than an extended cameo. Anyone expecting this to have been his grand return to action will be disappointed. Other than busting a few moves towards the finale he is wasted.

And this is one of Mulan’s main failings. Now I know that it is her story, but a level of expectation comes when you hire martial arts legends like Yen and Li, only to then sideline them for most of the movie. It just seems like poor decision making.

Surprisingly, lead villain Jason Scott Lee actually gets more of a chance to show off his martial arts skills than either Li or Yen. The Dragon: The Bruce Lee Story (1993) star has a great time chewing the scenery and has gotten himself in terrific shape for the role. It’s nice to see him once again in a big budget production.

The remainder of the cast made up off the likes of Tzi Ma and Yoson An get very little to do, although An does get to show off some martial arts skills in the finale.

It is nice getting to see the great Ron Yuan in a higher profile movie than normal, although I would suggest that martial arts fans seek out The Paper Tigers (2020) for a better example of the actor’s talents.

Shaw Brothers fans should also get a kick out of screen legend Cheng Pei-Pei’s appearance as an elderly matchmaker.

When it comes to the action, it is competently staged, but there is nothing here that most martial arts fans won’t have seen done better elsewhere. The battles and one on one fights are relatively bloodless but this isn’t a deal breaker as it is expected coming from the house of mouse. My main gripe in terms of the action is that it always seems to be cut short.

It seems that every time an action scene is just getting into its flow that it’s over. This is even true of Yifei’s face off against Scott Lee which should have been a showstopper, but instead it is kept relatively brief.

However, the fight choreography is on point, it is just that it would have been nice to see more of it. Caro does implement some interesting camera tricks to keep the action interesting which does slightly overcome the briefness of the fights.

Lovers of the original film may grow disheartened to learn that this take on Mulan doesn’t feature the songs of the original, although Harry Gregosn Williams smartly does use cues from them throughout his score. There’s even an update of Christina Aguilera’s smash hit song Reflection which plays over the closing credits.

Ultimately Mulan is a handsomely produced fantasy epic and one of Disney’s better live action remakes. It is just that it could have been so much more. There was an opportunity here to make an outstanding Hollywood take on the wu-xia genre instead of playing it mostly safe and squandering the talents of its cast.