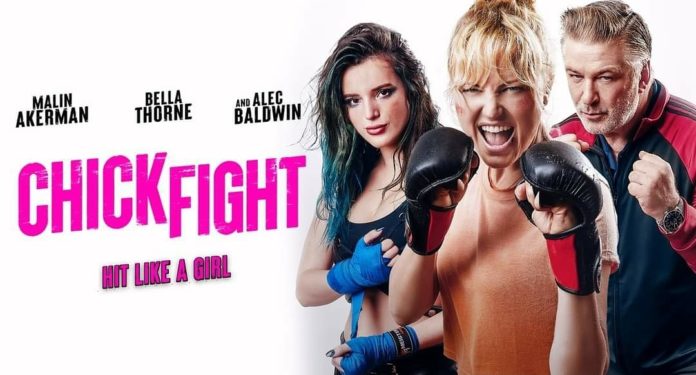 In terms of martial arts movies, the underground fight tournament has always been a popular setting. The likes of Bloodsport (1987), Kickboxer (1989) and the Undisputed series are all classics of the genre.

Typically, these films were star vehicles for the top martial arts actors of the time, going on to make the likes of Jean Claude Van Damme and Scott Adkins household names. Normally they feature an underdog who has to face insurmountable odds, perhaps with a few musical montages thrown in for good measure.

One thing they usually had in common would be the lead character being portrayed by a male actor. However, more recently there has been something of a re-focus with these types of films, with such titles as Lady Bloodfight (2016), Female Fight Club (2016) and the upcoming Bruised (2020) all featuring a strong female lead.

While the soon to be released Chick Fight would never be classed as full on actioner, it still features a handful of fight scenes and a strong female lead in the fine form of Malin Ackerman.

Ackerman stars as Anna, who after facing a number of setbacks, is introduced to an underground all female fight club by best friend Charleen (Dulcé Sloan). Charleen thinks that this will give Anna a chance to relieve her stress while enabling her to become a stronger person. As she gets to know the club better she finds out that she has a more personal connection than she could ever have realized.

Unfortunately she also attracts the wrath of resident champion Olivia (Bella Thorne), who doesn’t like Emma encroaching on her turf. It is only a matter of time before the two come to blows so Emma has to toughen up quickly. This comes in the unlikely form of drunken trainer Jack Murphy (Alec Baldwin) who only has two months to turn Emma into a fighting machine.

Now clearly I am not the target demographic for a film like Chick Fight, with it being tailored more towards the rom com crowd. Still, I found enough to enjoy here to make it a worthwhile experience.

Director Paul Leyden keeps things moving along at a decent pace, and while not perfect, offers an entertaining mixture of comedy and fight scenes. While not a laugh riot, there is a good helping of laughs throughout. With this in mind it is best to realize that Chick Fight is primarily a comedy, with Leyden’s handling of the action coming secondary.

In terms of the action it is mostly shot too close which restricts our view. Even when we get a chance to see more elaborate moves it is clear it’s a stunt performer and not the lead actors, with Leyden only showing his stars in the close ups.

Making up for this somewhat are some winning performances which rise Chick Fight over some similar recent comedy releases.

Ackerman has already shown her comedy chops in a number of comedy hits, notably alongside Ben Stiller in The Heartbreak Kid (2007) and more recently in the underrated slasher send up The Final Girls (2014).

While a number of her more recent roles have been beneath her talents, she has always given them her all. The same is true with Chick Fight, with Ackerman proving again that she is a gifted actress and comedienne, giving more than what is on the written page.

Even through lockdown Ackerman has managed to keep the viewing public’s attention with this being only one of a handful of films and shows she has appeared in. Only recently she starred in Netflix comedy The Sleepover (2020) as well as the upcoming Friendsgiving (2020).

Accompanying Ackerman’s Emma on her quest is Dulcé Sloan’s Charleen. Sloan plays off against Ackerman well, although her character is the type that is best enjoyed in small doses as she has a tendency to go over the top. This would be fine in a different type of comedy but Chick Fight’s framework doesn’t really allow for it. Still, she does get a lot of the film’s best lines.

Bella Thorne’s character is like a female Johnny Lawrence, with even Ackerman cracking a Cobra Kai joke at one point. Her character may be pretty one note but Thorne clearly is having fun with it.

It’s no surprise that the legendary Alec Baldwin is a scene stealer. Having lost none of the charisma he showed in his earlier films like Miami Blues (1988) and The Shadow (1994). Baldwin is hilarious as Murphy, Ackerman’s trainer. While in no way equal to some of his better known comedic roles such as Jack Donaghy in 30 Rock (2006), Baldwin still lights up the screen whenever he appears which sadly isn’t enough, with it looking as if his scenes were filmed in a few days.

Outside of the leads, it’s great to see ex-wrestler Kevin Nash feature as Ackerman’s father. His role isn’t exactly what you would expect from him and all the funnier for it. Entourage (2004) star Kevin Connolly also appears but doesn’t really get much to do other than be the object of Ackerman’s affection.

Chick Fight is currently scheduled for an upcoming cinema release. In most cases this would probably do a film like this harm, as it is clearly better suited to the VOD market. However this isn’t any regular year and with a total absence of new releases, perhaps Chick Fight may find an audience.

Although those jonesing for a fight flick will probably end up disappointed, those just wanting an easy 90 minutes to pass the time could certainly find a lot worse ways to do so.