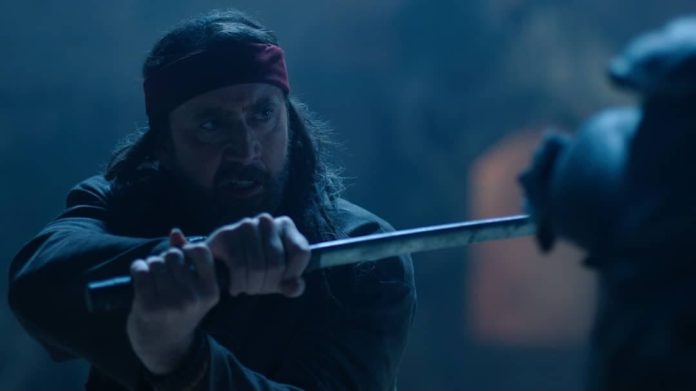 Moussi plays Jake, a member of a secret warrior sect trained in Jiu Jitsu. He and his fellow warrior’s mission is to protect the earth from Alien invader Brax who shows up every six years to face off against 9 chosen warriors. As the film opens we see Jake running for his life, with him jumping from a cliff to the ocean below to escape Brax.

Jake is rescued by Wylie (Nicolas Cage) who takes him to local villagers in order to patch him up. They in turn hand him over to members of the U.S. Army who are stationed in the area. He is interrogated by Myra (Marie Avgeropoulos) who thinks he knows more than he is letting on.

Jake’s fellow warriors Harrigan (Frank Grillo), Keung (Tony Jaa), Carmen (JuJu Chan) and Forbes (Maresse Crump) come looking for him, followed closely by Brax who wants to finish what he started. It is now up to Jake to try and regain his memory and stop Brax once and for all.

Logothetis certainly hasn’t lost a step when it comes to shooting an exciting action scene. Like he had shown previously in Kickboxer: Retaliation, he has a tendency to shoot his action in long takes which allows the performers to show off their skills.

Of course he does use the odd camera trick to cover for the use of stuntmen etc, but for the most part his action is on point. The standout scene for me was Tony Jaa’s assault on an Army base where he attempts to rescue the captured Moussi.

Logothetis switches perspectives a number of times throughout the scene, at one point shooting everything from the perspective of Moussi’s character, giving the audience the feel that they are part of the action.

As for the remaining action scenes, while not living up to this particular section, are well realized. Again collaborating with action director Supoj Khaowwong, he fills the film with well choreographed fight scenes. Sure, these aren’t on the scale of something like The Raid (2010), but they will certainly scratch the itch of anyone looking for quality martial arts action.

Surprisingly, the only let down in terms of the action was the finale, where Moussi’s Jake finally faces off against Brax one on one. It is quite brief in comparison to some of the action that has taken place beforehand. Even a heavily stunt doubled fight between Brax and Cage’s Wylie earlier in the film is more exciting.

The only other drawback is the insertion of some poor CGI blood. In matter of fact, it isn’t just the CGI blood that is poorly done, with the majority of the special effects being poorly realized. For the most part Logothetis overcomes this with his energetic and imaginative camera work. The addition of comic book style panels are also a nice touch, although not totally successful due to the slightly poor art style employed.

Most martial arts fans are more interested in the fight scenes than the plot and performances, which is a good thing when it comes to Jiu Jitsu. The script by Logothetis and Jim McGrath is mainly there to get the characters from one fight scene to the next. The characters are more types than being rounded individuals i.e. the leader, the sidekick, the tough female etc.

Considering the dialogue on display, it is no surprise to see that co-writer Jim McGrath has mostly worked in television. While he did co-write previous Logothetis productions Kickboxer: Vengeance (2016) and Kickboxer: Retaliation, he is mostly known for working on the likes of Simon & Simon (1981) and The Father Dowling Mysteries (1989).

While the dialogue isn’t terrible it isn’t exactly memorable either, other than what is spouted by Nicolas Cage who can always make more of what is on the written page.

Also, McGrath and Logothetis show no shame in stealing from more popular sci-fi movies, mainly Predator (1987). The villain Brax is essentially the Predator in all but appearance, with him similarly using camouflage and thermal imaging.

Even with what could be considered a lacklustre script, the performers still do what they can with their roles even though they don’t really have much to play with.

With the likes of Alain Moussi this isn’t as much of a problem as he is mostly there for his martial arts skills rather than acting ability. He has already proven in the last two Kickboxer films to be a talented physical performer and Jiu Jitsu gives him ample opportunity to prove it once again. His acting still comes off as slightly wooden but i’m sure he will overcome this in time.

Making up for Moussi’s lack of experience is a suitably bonkers performance from Nicolas Cage, who even in a relatively small role, lightens up the screen whenever he appears. Sure he is clearly doubled in his fight scenes but Cage is clearly having fun. No matter the quality of the production, you could never say Cage phones in a performance.

Alongside Moussi and Cage, Jiu Jitsu features some of the finest martial arts actors currently working today. The legendary Tony Jaa pretty much steals the show as well as getting the films best action scenes. I assumed that Jaa’s role would mostly be a guest star but he has a considerable amount of screen time.

Interestingly, Jiu Jitsu finally gives Jaa a chance to appear alongside Moussi. They were meant to originally co-star in Kickboxer: Vengeance where Jaa would have played the role finally taken by Jean Claude Van Damme.

The remaining cast do well, but don’t get as much of a chance to make an impression like Moussi, Cage or Jaa do.

The terrific Frank Grillo pretty much shows up to act gruff and bark orders, but is short changed in terms of the action. This was slightly disappointing considering his stellar work recently with the likes of Point Blank (2019) and Black and Blue (2019).

The same is true of Rick Yune, who fares even worse than Grillo, only appearing in a handful of scenes. Other than shooting a gun at Brax, he takes no part in any of the film’s action scenes.

At least Juja Chan and Marrese Crump get to show off their skills. Chan had already impressed with her supporting roles in the hit show Wu Assassins (2019) and the otherwise lacklustre Invincible Dragon (2019). While she doesn’t get as much of a chance to show off her moves as those roles, she still manages to impress.

The same is true of Crump, whose one on one fight with Brax is well choreographed. He is certainly better used here than his other release of the year, the disappointing Welcome to Sudden Death (2020).

Lastly I should mention the work of stunt performer Ryan Tarran, who acts as villain Brax. While we don’t get a chance to see his face, with him acting under prosthetics, he still capably performs in all of his fight scenes and makes for a formidable bad guy. Tarran also worked behind the scenes as stunt coordinator.

Jiu Jitsu wasn’t the success I was hoping for, with too many drawbacks stopping it from being a martial arts classic. Still, if viewers lower their expectations they are sure to be entertained by its near non stop fight scenes and a suitably over the top Nicolas Cage performance.