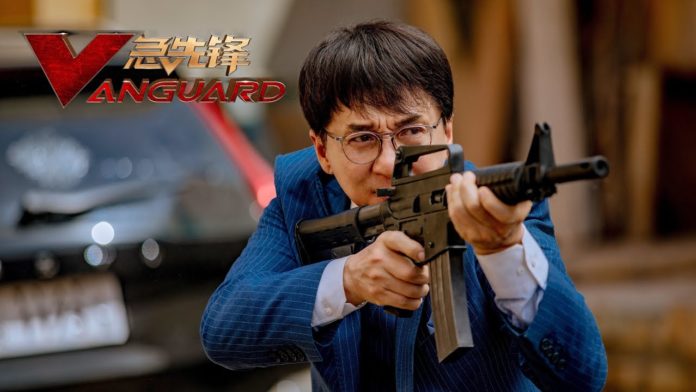 Originally scheduled for release at the start of the year before being delayed due to the Covid-19 pandemic, Stanley Tong’s Vanguard has finally secured itself a release date. This should please both fans of the director and the film’s star, Jackie Chan. The one question is, has the wait been worth it?

Tang Huanting (Jackie Chan) is the head of international security company Vanguard. Him and his team are called into action when terrorists attempt to kidnap one of the clients, accountant Qin Guoli (Jackson Lou). Teammates Lei Zhenyu (Yang Yang) and Zhang Kaixuan (Ai Lun) manage to scupper the terrorists’ plan by rescuing Qin.

It turns out that Qin has something they want and will stop at nothing to get it. This includes kidnapping Qin’s environmentalist daughter Fareeda (Xu Ruohan). It is now up to Vanguard to not only save Fareeda but uncover what the terrorists are really up to and stop them once and for all.

Discounting Chan’s brief cameo role in Project S (1993), this marks his and Stanley Tong’s sixth collaboration. In amongst them they have created a number of classics, namely Police Story 3: Supercop (1992) and Rumble in the Bronx (1995). Even their lesser projects such as First Strike (1996) and The Myth (2005) have managed to be worthwhile endeavors.

Their last film was the poorly received Kung Fu Yoga (2017), which I personally found to be an enjoyable but lightweight affair. Vanguard has many similarities to their previous film, while it takes a more serious approach to proceedings it shares many of its same issues.

For the most part Tong keeps the action moving along at a fair pace, with Vanguard being filled with a number of well choreographed set pieces. In fact the pace can be so relentless it doesn’t give the audience much time to think about how paper thin the plot and characters actually are.

Similarly to many of his other films as director, Tong also wrote the screenplay. On the grounds of his work here it would seem writing isn’t his strong suit. The plot is mainly an excuse to get to the next action scene.

At certain points he tries to make the action seem gritty but then includes far fetched technology. In one particular scene he has someone fly around on a hoverboard that looks like it was borrowed from the set of Masters of the Universe (1987).

Like his earlier work, the action of his film takes place in a variety of different locales all around the world, with a multiracial cast. Unfortunately, like those earlier films this accounts for a cast struggling with lines in a language that isn’t their own.

In some instances it would appear that some of the cast aren’t even actors. This could be a drawback for some but it made me somewhat nostalgic for the Hong Kong actioners of the 80’s and 90’s, where they would just use any guy off the street to fill a non-Chinese role.

Of course, we normally don’t go to a Jackie Chan movie for great performances and well rounded plots. What we are really interested in is the action, and for the most part Vanguard delivers. With action choreography by Tong and the Jackie Chan Stunt Team, the film is filled with fight scenes, shootouts and car chases.

The main standout is the opening fight scene where Yang Yang and Ai Lun’s characters attempt to rescue Jackson Lou’s shady accountant. It has some very Jackie style comedy moves, even though he doesn’t actually take part in the scene.

The other is an extended gun battle in the Middle East, where Tang and his team attempt to rescue Fareeda. Chan and his team mates all get a chance to show off their moves amongst the bullets and explosions, although it must be said that Tong cuts his action more haphazardly than he used to, akin to a Michael Bay film.

It is important to point out that Vanguard is more of an ensemble piece than previous Tong and Chan collaborations, with Chan mostly taking a back seat and letting the younger cast show their stuff. This isn’t to say he doesn’t get in on the action, but fans expecting another Police Story 3 will be sadly disappointed.

While the action is exciting and energetic, it is almost derailed in certain points by the inclusion of possibly the worst CGI I have seen in a big budget production. One scene has Chan and company facing off against a computer generated lion that looks as if it belongs in a film from the early 90’s. The effects are roughly the same quality as those that were in Chan and Tong’s Kung Fu Yoga. In some instances the cheesy nature of them does add a certain charm to the film but you would never be mistaken that they are high quality.

On certain occasions the CGI is overlaid over the stunt work, making the hard work of the stunt performers obsolete. One particular scene has Chan chasing after a team member on a Jet Ski. The scene looks like Chan was working in front of a green screen. Only when watching Chan’s trademark outtakes over the end credits do we see that Chan actually carried out this scene for real, with him having a life threatening accident during its shooting.

As mentioned, the characters are paper thin. Chan essentially plays the same role he has played countless times before, that of the righteous hero. There isn’t any of the nuance shown in the likes of Shinjuku Incident (2010) or The Foreigner (2018). Even so, Chan’s sheer presence is enough, and I for one am glad he is still making movies when he is now in his late 60’s.

A great deal of the film’s action is taken up by Chan’s younger co-stars Yang Yang and Miya Muqi. Both of them equip themselves well and could be the start of them being action stars if this is the path they wanted to go down. Vanguard actually marks Muqi’s second film with Chan and Tong with her having a co-starring role in Kung Fu Yoga.

Lun Ai also does well, showing off some distinctly Chan-like moves during the opening and also giving the film a bit of an emotional punch later on in the film when needed. It was also nice to see martial artist and stuntman Brahim Chab/Brahim Achabbakhe play one of the main villains, even if he was slightly wasted when it came to the action.

Vanguard has too many drawbacks to ever make it a Jackie Chan classic. It may not even come close to some of Chan’s lesser vehicles, but it is as close to a proper Jackie Chan film we are likely to get these days, albeit one where he is a supporting player.

Hopefully fans will overlook the poor special effects and the fact that Chan is now getting on in years and just enjoy Vanguard as a fun throw away action movie.