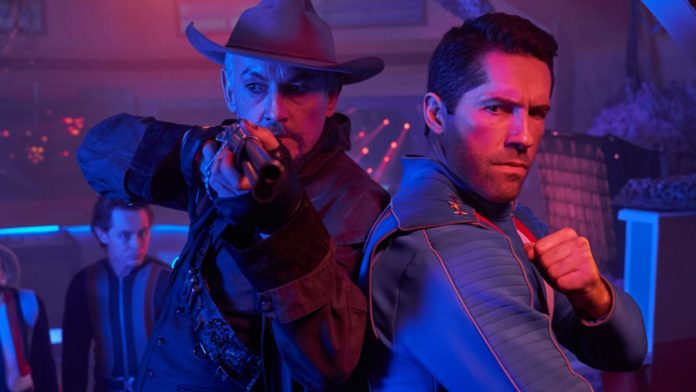 The recently released Max Cloud is a clear change of pace and style for leading man Scott Adkins, with his latest being a full on action comedy. Sure the likes of Accident Man (2018) and The Debt Collector (2018) have their funny moments, but for the most part he played it straight.

Even when dipping his toe in the comedy genre with the likes of Grimsby (2015), he still played it straight with the funny stuff being left to his co-stars.

With Max Cloud he is in full on comedic mode, sending up his own tough guy image in the process. Now this may alienate some of those who only want to see Adkins kicking ass but others will get a kick out of his seriously over the top display of machismo.

As the film opens we are quickly introduced to intergalactic adventurer Max Cloud (Scott Adkins) who is in the proceeds of crash landing his ship. With the hull breached Cloud quickly realizes that he and his crew have landed on an infamous prison planet which is home to some of the most despicable criminals of the galaxy.

It is only after this that we cut to 1990 Brooklyn and find out that the whole opening sequence has been the level of a video game being played by teenager Sarah (Isabelle Allen). Her dad complains that she is playing too many video games and decides to confiscate her console. It is here where she makes a fateful wish that she could play video games all day.

All of a sudden Sarah finds herself trapped in the video game world of Max Cloud, inhabiting the body of the ship’s cook Jake (Elliot James Langridge). She quickly realizes that the only way out of the game is to complete it. Sarah teams up with Max and crew mate Rexy (Sally Collett) to take on the villainous Revengor (John Hannah), while her best friend Cowboy (Franz Drameh) controls the game back in the real world.

Director Martin Owen has created a lovingly nostalgic homage to the pop culture and video games of the 80’s & 90’s. While there are some small nitpicks here and there, anyone who grew up in this era will get a kick out of the many references to video games and films of the era.

My personal favourite was Franz Drameh’s character referencing the film Vice Versa (1988), with his belief in the events of that film being enough for him to rationalize why his friend is currently trapped inside a video game.

With a relatively low budget Owen has created a visually stunning film with the vibrant colour palette adding to the overall video game aesthetic. The character and set design is heavily reminiscent of 80’s sci fi such as Spacehunter: Adventures in the Forbidden Zone (1983) or Ice Pirates (1984) to name a couple.

Now not everything is perfect. Not all of the jokes hit home and the plot is paper thin. Additionally there isn’t much in the way of character development, although this is mostly on purpose as the majority of the characters are meant to be video game characters.

There is also an issue in terms of the action. The action scenes for the most part are well staged, with fight choreographers Andy Long Nguyen and David Szatarski creating a number of over the top set pieces, with some good sight gags about beat em ups.

The main problem with them is that there never seems to be any real stakes at play, with the majority of the action being played more for laughs. Still it is in line with the overall tone of the film and anything else would probably feel out of place.

One memorable fight scene does have Adkins once again square off against man mountain Martyn Ford. Of course it in no way compares to their fight in Boyka: Undisputed (2016) or even Accident Man (2018) for that matter, but it is still a fun sequence.

All the performances are on point, especially Adkins who is ideally cast as the ridiculous Max Cloud. His role is unlike anything he has played before and Adkins seems to relish the change. His performance, like the rest of the cast is total pantomime, with him and his fellow cast members all being suitably over the top.

He is suitably matched by co-star Elliot James Langridge and Sally Collett. Langbride has fun embodying the game version of Sarah, amazed at first she is in her favourite video game, only to realize she may be stuck there for good. Collet is also great fun as the snarky Rexy/Sofia who may have more in common with Sarah than initially expected.

Collet was heavily involved with the production of the film with her co-writing the film with director Owen as well as working behind the camera and directing the second unit. Max Cloud marks Langridge and Collett’s second film with Owen after the disappointing Killers Anonymous (2019).

They aren’t the only Killers Anonymous returnees, with the always excellent Tommy Flanagan showing up as space cowboy Brock. His fellow Scotsman John Hannah plays the main villain Revengor who gets his fair share of hilarious moments, the best involving an 80’s fitness video.

The other villain of the piece is portrayed by Lashana Lynch, who is probably most famous at the moment for appearing in the upcoming James Bond movie No Time to Die (2021). Her character actually appears to be more of a physical threat than Hannah and could give viewers a small taste of what she may bring to her role as the new 007.

Further adding to the 80/90’s vibe of the film is the excellent synth score. Even better is the inclusion of some Stan Bush songs. If you will pardon the pun, no 80’s style film is complete without a bit of Bush.

Adkins should be applauded for trying something different and whilst Max Cloud isn’t an overall success it is still great fun and should bring back some nostalgic memories for anyone who grew up on a MegaDrive or SNES.