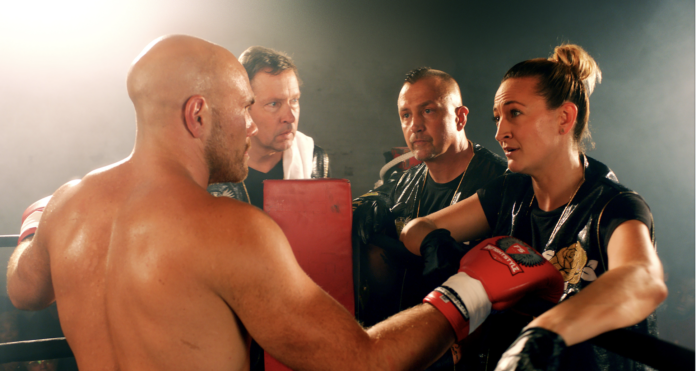 Coming soon from Gravitas Ventures and Kamikaze Dogfight, Haymaker is a romantic drama with martial arts overtones. The film marks the debut of leading man Nick Sasso who not only stars but wrote, produced and directed the feature in addition to carrying out countless other jobs behind the scenes.

Sasso plays ex Muay Thai fighter Nick who is currently slumming it as a nightclub bouncer, where he works with his friend Mack (D.B. Sweeney). One night the club is hosting a concert from transgender entertainer Nomi (Nomi Ruiz).

The concert goes fine but Nomi finds herself being followed backstage by a local thug who attempts to rape her. Luckily for her Nick comes to her rescue, beating up the thug in the process.

This leads to Nick losing his job but gaining a new one, with him now working as Nomi’s bodyguard. As the two spend more time with each other their relationship starts to develop further with Nick becoming more than just Nomi’s protector. Through this relationship Nick finds himself once again back in the ring.

I wasn’t aware of Sasso before viewing Haymaker. Upon checking I saw that he has worked in the business for years behind the scenes, mostly in visual effects although he has directed a number of shorts. He does a commendable job considering this was his first feature and he is spinning so many plates.

Clearly shot on a low budget, the film has that distinct digital look although Sasso and his director of photography Brent Johnson do manage to get some nice visuals in. The opening club scene actually reminded me somewhat of the work of Nicolas Winding Refn, especially with the colour palette.

I was worried at first if the visuals would perhaps get in the way of the story, with Nick’s takedown of Nomi’s rapist only being shown in quick flashes. Not exactly what you want to see in a supposed martial arts film. However it settles down to a more traditional style after this.

Now the current synopsis online and the promotional posters slightly mis-sell the film. Upon reading the synopsis I was assuming that Nick would return to the ring in order to protect Nomi but his reasoning isn’t that exciting.

In matter of fact, Haymaker is not even an action movie. While Nick is a martial artist, there is probably less than 5 minutes worth of actual fight action in the films entirety. This isn’t a complaint as Sasso was clearly making something different, the main issue is more in how the film is sold. Fight fans would certainly be disappointed if they were expecting something along the lines of Kickboxer (1989).

The main focus of Haymaker is the burgeoning relationship between Sasso and Ruiz, and both of them sell it well. It is clear that Sasso wrote the parts with the two of them in mind, even down to the lead characters having the same first names.

The script was clearly tailored to their strengths. Sasso is more the strong silent type but he does show some emotion as the film progresses, with Ruiz being the more emotional and potentially destructive of the two.

A bit more background to the characters would have been nice. We know that Nick is an ex-kickboxer, with others speaking about how great he was but we never truly find out why he turned his back on it.

Nomi is slightly more rounded, with us at least being shown her life outside of her business, with us being introduced to her mother and grandmother. While these scenes don’t go into great detail they do at least add some depth to the character.

I did find it refreshing that the relationship between the two never came off as exploitive. The fact that Ruiz is transgender isn’t actually dwelled upon. Even when Sasso’s character finds out early on in the film, he kind of takes it in his stride. The fact that she is transgender isn’t even what starts to drive them apart, with Ruiz’ destructive behaviour being the driving factor.

Sasso does include a number of scenes that would have been perfect lead-ins to further confrontations, being the perfect excuse to include a fight scene. Perhaps there wasn’t the budget for this or it could be that simply this isn’t the film Sasso wanted to make, being more interested in the dramatic aspects of the film.

As such there are a couple of scenes that I thought would play a more important part later in the film but they are mostly forgotten about. One has Ruiz visit a recording studio where a fellow artist is derogatory towards her.

The other is a scene with Ruiz and the great Udo Kier. I especially thought this would be revisited, with Kier implying that Ruiz still owes him. I expected this could be the reason for Nick’s return to kickboxing, but ultimately it is more simple than that.

Similarly to Sasso, I was unaware of the work of Nomi Ruiz. She may be better known to some as Jessica 6. The singer/songwriter previously had a small role in the television series Mayans M.C. (2018), but this is the first time she has been the lead character.

Like Sasso, this is clearly a labour of love for Ruiz, with her also acting as one of the film’s producers. Her acting skills are a bit rusty but does well in what is her first leading role. She also gets a chance to show off her music skills, with her singing a few musical numbers during the film.

It looks as if her musical background may have helped with the production, with Sasso seemingly shooting some of Ruiz’s real life concerts to use as footage for his film. This adds a bit of production value to proceedings, with the film taking place in a number of exotic locales.

With the main focus mostly being on Sasso and Ruiz, the supporting cast are mostly short changed. It is nice to see D.D. Sweeney and Zoe Bell but they don’t really get much to do in their limited screen time.

Bell did work behind the scenes, being the stunt co-ordinator and 2nd unit director, but there’s nothing here that would really show off her talents. The fighting that is on display is pretty basic, with more of a focus on realism than excitement. Even the finale, where Nick faces off against one of his friends/opponents in the ring is pretty forgettable. Normally this is where the film would be able to generate most of its excitement, but it seemed like Sasso couldn’t wait for it to be over, with the full fight only being a few minutes long.

Still, Sasso should be congratulated for trying to do something a bit different in a market flooded with DTV action fodder. Whilst not totally successful it at least works as a calling card for both his and Ruiz’s talents.

Haymaker will be available on in theaters, VOD and Digital January 29th.