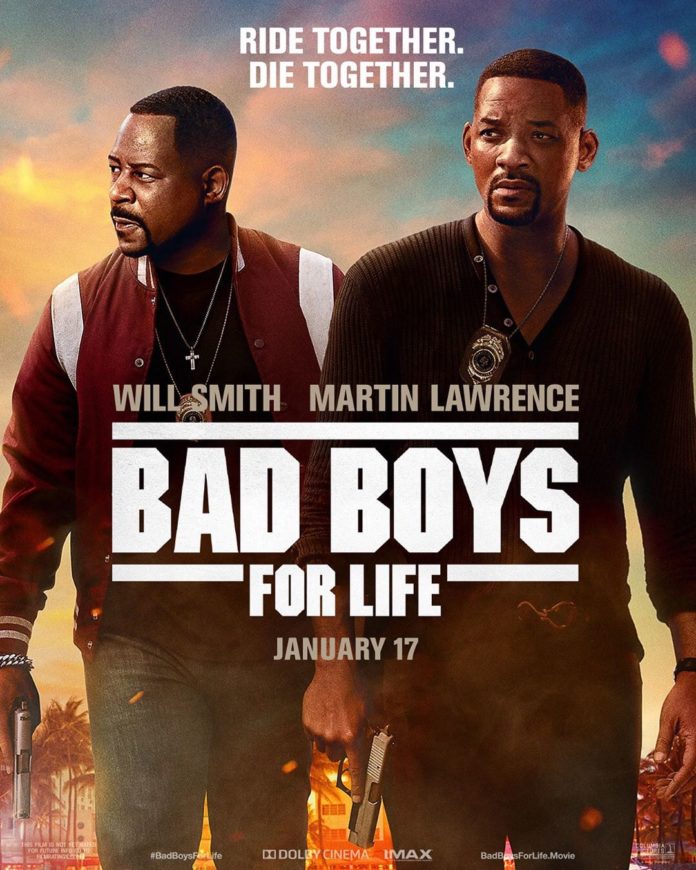 UPDATE: The action-packed Trailer #2 is here along with the latest Poster above!

UPDATE: More casting updates as arrived with Jacob Scipio (We Die Young) set to play the villain of the film, ‘Armando Armas’, “a cold-blooded killer with a vicious, taunting nature” who is the head of a drug cartel.

Joining Scipio is actress Paola Nuñez who will portray ‘Rite’, “the tough and funny criminal psychologist who is the newly appointed head of AMMO and Mike’s former girlfriend- and the one who got away.”

UPDATE: ‘Sucker Punch’ star Vanessa Hudgens (Second Act) has been added to the cast of Bad Boys For Life aka Bad Boys 3.

Joining alongside Hudgens is Alexander Ludwig (Lone Survivor) and Charles Melton (TV’s Riverdale). The trio is set to portray “a modern, highly specialized police unit that collides with the old school Bad Boys (Smith and Lawrence) when a new threat emerges in Miami.”

UPDATE: MARTIN LAWRENCE has confirmed his return via Instagram alongside Will Smith!

UPDATE: The release date for the $100 million budget BAD BOYS 4 LIFE has been pushed back for the hundredth time as Sony Pictures are now saying the film is expected to hit theaters on January 17th, 2020.

The third installment will follow “Marcus Burnett (Lawrence) working as a private eye after a falling out with Mike Lowery (Smith), who is going through a midlife crisis as a bachelor who finally wants to mature, all while dealing with a new a young and cocky partner who is loyal to Lowery but that loyalty is not reciprocated, and finds bond with Burnett when he returns to the fray. Lowery and Burnett are brought together again when a lean, mean, skilled, Albanian mercenary with a vendetta puts a death order on Lowery and Burnett for the death of his brother. Now the two must work together once again to bring him down”.

UPDATE: ‘Bad Boys For Life’ is back on track as ADIL EL ARBI and BILALL FALLAH is in early talks to take the helm. The duo is best known for directing a few episodes of TV’s ‘Snowfall’ and the gritty foreign crime drama ‘Black’.

If everything goes according to plan, production on the third installment is expected to begin this August.

UPDATE: ‘Bad Boys For Life’ has hit another bump in the road. Director JOE CARNAHAN exits the project due to “scheduling conflict”.

Carnahan is currently attached to direct the upcoming ‘The Raid’ Hollywood remake along with writing the script for the ‘X-Force’ movie.

Stay tuned as the studio searches for a replacement.

UPDATE: Looks like we have to wait even LONGER to see the ‘Bad Boys’ back on the big screen. The third installment have been pushed back to November 9th, 2018. There is no official reason for the delay but everything seems to point to WILL SMITH’s busy schedule.

Oh well, what cha gonna do?

UPDATE: The official title for the third installment is BAD BOYS FOR LIFE. Unfortunately we will have to wait a little longer to see the duo back in the action as the release date have been pushed back AGAIN to JANUARY 12th, 2018.

UPDATE: Leading man WILL SMITH had this to say during his time on Beats 1 radio show:

“There is a very-very-very strong possibility that you will be seeing a Bad Boys within the next 12 to 16 months.”

See for yourself in the video below at the 18:31 mark.

UPDATE: Sony have officially put BAD BOYS 3 on the fast track! According to DEADLINE director JOE CARNAHAN (The A-Team, The Grey) have been hired to do a pass on the script – written by DAVID GUGGENHIEM (Safe House) – and to possibly direct.

The studio is pushing to get the script ready in time for star WILL SMITH to jump right into it after he finishes his work on ‘Suicide Squad’.

How do you feel about Carnahan possibly taking over for original director MICHAEL BAY on this third installment? Comment below!

Bad boys bad boys watcha gonna do? Watcha gonna do when they come for you? Looks like the long talked about BAD BOYS 3 is finally back on the fast track! Actor comedian MARTIN LAWRENCE recently sat down with CONAN O’BRIEN and confirmed the following:

Conan asked Martin if a ‘Bad Boys 3’ will happen, and Martin responded “I believe so. Yes. I just talked to Jerry Bruckheimer yesterday and he said its real, they’re working on the script, they’re getting close and it all looks good.”

The ‘BAD BOYS’ franchise is one of those series that fans have enjoyed and have been asking for more during the past few years. Combining a great blend of comedy (and great on-screen chemistry) from lead actors WILL SMITH & MARTIN LAWRENCE and the blow-everything-up action style of director MICHAEL BAY (Transformers), it was a perfect mix for a fun summer action blockbuster.

For those action movie buffs out there, you guys should notice that ‘Bad Boys 2’ features a destruction-filled car chase down a hill through a shanty town that was obviously a homage to JACKIE CHAN’S classic scene from POLICE STORY:

The original ‘Bad Boys’ literally launched Will Smith’s action hero status and ‘Bad Boys 2’ doubled the original’s worldwide box office gross to a total of roughly $273 million. So a third installment really IS long overdue. But due to scheduling conflicts, ‘Bad Boys 3’ have been delayed for years. Producer JERRY BRUCKHEIMER (The Rock, Con Air) explained the delay back in April:

“It’s so funny because we’ll get Sony real excited to make the movie, and then Will [Smith] is off doing two movies. And then, Will will come back and be real excited about it, and Sony will say, ‘Well, maybe it’s not the time for this.’ And then, Ride Along came out and was a big hit, and now they’re all excited to make the movie, but Will is off doing something else. It’s just trying to get everybody together to make it. But, we’re working on the script. We have a lot of faith and hope that we’ll do it.”

Now that Martin have confirmed that a script is finally completed, its all down to getting all the key players (Will Smith, Michael Bay, and Jerry Bruckheimer) to commit their time to the project.