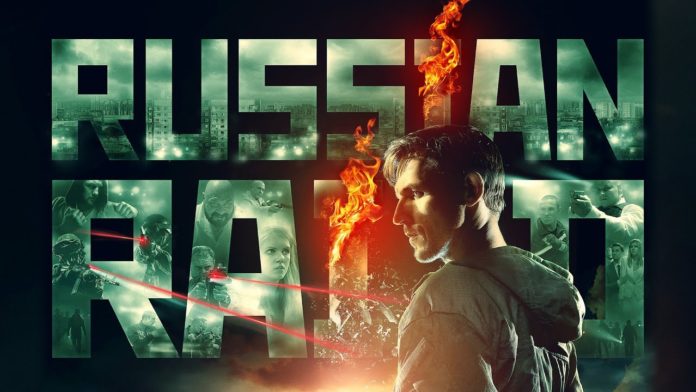 Coming from the good people at Well Go USA, Russian Raid is a martial arts thriller from first time director Denis Kryuchkov. Now Russia may not be the first country that people think of when it comes to action cinema, but there have been some terrific actioners coming out of the Soviet Union.

In recent years there has been the likes of T-34 (2019) and the Balkan Line (2019), both of which could easily compete with anything coming from Hollywood. Now the main question is, does Russian Raid hold up in comparison? The answer is sadly No. Although there is much to enjoy here, there are too many issues involved that stop Russian Raid from being totally successful.

The film follows Nikita (Ivan Kotik), a former sniper who is hired by a shady businessman to take down the security of a local factory so the businessman can extort the owner. Nikita is teamed up with a gang of fighters in order to carry out their raid but quickly find they are out of their depth when the true owners of the factory show up.

It emerges that the factory is actually a front for Russian Warlord The Ghost, who coincidentally (or is it) was involved in the death of Nikita’s father years before. Now Nikita and his gang have to fight to the death with the warlord’s private army.

Denis Kryuchkov has made no secret that he was inspired by Gareth Evans The Raid: Redemption (2011). One would only have to look at the title to realize this. However The Raid isn’t the only influence here, with the film having all the typical cliches you would expect in a film of this ilk.

Kryuchkov fills his film with almost non stop action. Clearly he realized that was the main selling point of the film, with plot and character coming secondary, or being non-existent in certain respects.

The plot is pretty much copied wholesale from The Raid, with our heroes in one location fighting their way to the top to get to the boss. There is a slight variation with a revelation being made halfway through but it is obvious.

Now, with many action films, the lack of originality or even an interesting plot isn’t an issue, as most of the audience are really there for the action.

Still, I still feel that is a need for some semblance of character development. The characters involved in Russian Raid are all the usual types, with the cocky one, the tough one, the slick one, etc. There is no attempt made for the audience to get to know them, with most of the characters being unlikeable which I think is a major failing in any action movie. Why should I invest in the action if I don’t care about the outcome.

Only the lead character of Nikita has any type of background story, with him having ulterior motives for being involved with the raid. Even then, Ivan kotik doesn’t exactly inject Nikita with much in the way of emotion to set him apart from the rest other than the fact he has much more screen time.

Perhaps I am being too judgmental as the majority of the cast are made of martial artists and stuntmen, so their lack of acting ability is understandable. At least when it comes to the action they are all adept performers.

Now I wasn’t familiar with any of the main cast although lead Ivan Kotik was vaguely familiar. Upon checking I noted that he had appeared in Scott Adkin’s creature feature Legendary (2013) and Jackie Chan’s Dragon Blade (2015) in small roles.

Kotik does have an interesting fighting style that incorporates the use of Russian dance giving Kotik’s moves a sense of fluidity that sets his fight scenes apart from his co-stars.

Director Kryuchkov handles the action adequately. While the choreography is well done for the most part, on a number of occasions it is clearly apparent that the actors’ moves aren’t connecting.

Similarly there is sometimes a lack of power with the moves being shown, with it seeming as if the actors are holding back to limit damage. Of course when characters are meant to be fighting to the death, this is a problem. The fights were somewhat reminiscent of Erik Matti’s BuyBust (2018), where the action is well staged with some impressive camera moves, but the lack of power being displayed robs the action of any urgency.

Like BuyBust this only happens occasionally, with other action scenes being quite impressive. Now while they become slightly repetitive, the fights for the most part manage to entertain.

Unfortunately, Kryuchkov injects some other stylistic and editing touches that I felt harmed the action rather than adding to it as he clearly intended. There is some serious undercranking going on during a number of the fight scenes, making the actors move at unnatural speeds. Additionally he constantly includes what seems like a camera shudder or camera tilt during the fights.

At first I thought this was to cover an edit, but as the fights continued it recurred. Perhaps this was Kryuchkov’s attempt to emulate Gareth Evans’ style of shooting action but for the most part I just found it distracting. I’m not sure if this was added in post or carried out in camera, but I found it an annoyance.

Thankfully he puts this aside as the film’s type of action shifts to gunplay. Kryuchkov seems to have a firmer grip on the gunfighting style of action. I would say the last 40 minutes of the film with its mixture of martial arts and gunplay is when Russian Raid really hits its stride. Now as expected there is the usual digital blood added in post, but it is capably carried out and not too obtrusive.

Perhaps I’m being too judgemental on what was clearly a low budget film. Some of the issues I speak of such as the undercranking would probably be corrected in a mainstream production, but for most low budget productions the option to reshoot scenes just isn’t a possibility.

Even with the issues mentioned, martial arts fans should still find enough to enjoy with Russian Raid, with it moving at a fair clip and being filled to the brim with both martial arts action and gunplay. It also should work as a decent calling card for Kryuchkov who shows what he can handle with limited resources.