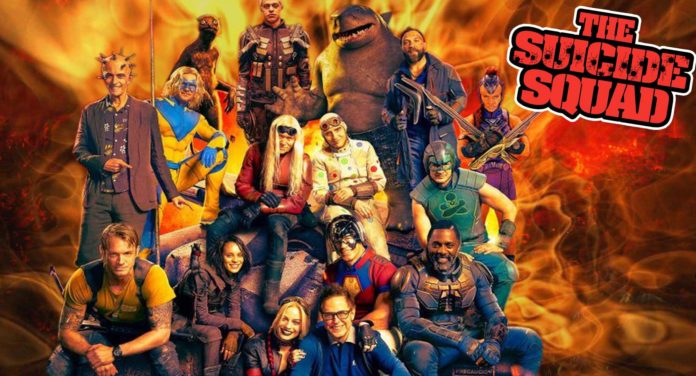 UPDATE: The Red Band Trailer for The Suicide Squad is here!

In case you haven’t notice, that is none other than action legend Sylvester Stallone as the voice of King Shark.

UPDATE: Warner Bros. has released the official synopsis for The Suicide Squad giving us a better idea of what we can expect from the highly anticipated sequel.

“Welcome to hell — a.k.a. Belle Reve, the prison with the highest mortality rate in the US of A. Where the worst Super-Villains are kept and where they will do anything to get out—even join the super-secret, super-shady Task Force X. Today’s do-or-die assignment? Assemble a collection of cons, including Bloodsport, Peacemaker, Captain Boomerang, Ratcatcher 2, Savant, King Shark, Blackguard, Javelin and everyone’s favorite psycho, Harley Quinn. Then arm them heavily and drop them (literally) on the remote, enemy-infused island of Corto Maltese.

Trekking through a jungle teeming with militant adversaries and guerrilla forces at every turn, the Squad is on a search-and- destroy mission with only Colonel Rick Flag on the ground to make them behave…and Amanda Waller’s government techies in their ears, tracking their every movement. And as always, one wrong move and they’re dead (whether at the hands of their opponents, a teammate, or Waller herself). If anyone’s laying down bets, the smart money is against them—all of them.“

The Suicide Squad will premiere in theaters and HBO Max on August 6th.

UPDATE: Production has officially wrapped on The Suicide Squad.

And that’s a wrap on #TheSuicideSquad. My father died two weeks before we started filming and my dog died two weeks before the end. It was a hard, hard time in my life and yet the most fulfilling time I’ve ever had making a movie. The professionalism, talent, compassion and kindness of this cast and crew inspired me every day. Thanks to everyone involved in this film, in every stage of development, in every department – I am grateful from the bottom of my heart for you all. You are why I make movies. ❤️

UPDATE: Director James Gunn has revealed the full cast of The Suicide Squad.

Davis, Robbie, Courtney, and  Kinnaman will all reprise the same roles they had in the 2016 film as Amanda Waller, Harley Quinn, Captain Boomerang, and Rick Flag.

Don’t get too attached. #TheSuicideSquad

UPDATE: Director James Gunn has recruited a member of the Guardians Of The Galaxy to join the squad. Michael Rooker is in talks to play King Shark in The Suicide Squad.

This will be the character’s big screen debut as he was previously seen on the CW’s The Flash series.

UPDATE: WWE superstar John Cena (Bumblebee) is in talks to join the squad!

This will be Cena’s first shot at a comic-book flick. Details are kept under wraps, so it is still unknown what character Cena will portray.

UPDATE: Out of respect for Will Smith and leaving the door open for him to return as Deadshot in the future, Idris Elba has agreed with director James Gunn to pass on the role for another character. To clarify, Elba is still starring in the film but in an unspecified role.

Viola Davis, Joel Kinnaman, and Jai Courtney is all reportedly returning to reprise their original roles of Amanda Waller, Rick Flag, and Captain Boomerang. Margot Robbie is also expected to return as Harley Quinn in some capacity.

UPDATE: After reports of Idris Elba taking over the role of ‘Deadshot’ from Will Smith, it was looking more and more likely that the Suicide Squad follow-up was less of a sequel and more of a complete reboot. Now we have confirmation from producer Peter Safran that The Suicide Squad will be a total reboot. Safran stated:

“First of all, we don’t call it Suicide Squad 2 ‘cause it’s a total reboot, so it’s The Suicide Squad and I think people should be extremely excited about it. It’s everything you would hope from a James Gunn script and I think that says a lot and that promises a lot and I know that we will deliver a lot.”

The Suicide Squad is set to start production this fall. Stay tuned as the rest of the squad gets casted.

UPDATE: The Hollywood Reporter reports that Idris Elba (Hobbs & Shaw) is in final talks to replace Will Smith as Deadshot!

UPDATE: According to Variety, superstar Will Smith will NOT be returning as Deadshot for the upcoming Suicide Squad follow-up. The departure is said to be due to scheduling conflicts. However, Warner Brothers may be leaving the door open for a return in the future.

UDPATE: A release date is set for the follow-up to Suicide Squad for August 6, 2021. As previously reported, James Gunn is now in final talks to take the helm with Zack Snyder and Deborah Snyder serving as executive producers.

Tentatively titled The Suicide Squad, the sequel is said to be more of a “re-launch” than a direct follow-up as it will consist of “mostly all-new cast of characters and actors.” We emphasize “mostly” as main leads Margot Robbie and Will Smith are the only original skwad members expected to return as Harley Quinn and Deadshot.

UPDATE: ‘Guardians Of The Galaxy’ helmer JAMES GUNN is in early talks to write a new script and potentially take over for Gavin O’Connor as director of the ‘Suicide Squad’ sequel. Reports are saying Gunn’s sequel may be a “completely new take on the property”. This could mean the follow-up may be a slight reboot.

No words yet on if the original characters and cast members will return.

With reports that the previously announced ‘Deathstroke’ solo film from director Gareth Evans (The Raid) will not be happening until at least 2020, the mercenary for hire is now set to debut as the main villain in SUICIDE SQUAD 2.

‘Slade Wilson’ himself JOE MANGANIELLO (Rampage) was recently at the Oz Comic-Con and interacted with a super-fan who dropped the news:

“He is such a great guy, what a boss… I said ‘I know you can’t say much, but what can you tell me about your next appearance as Deathstroke?’” Joe replied “Suicide 2, versus Deadshot”.

The script for the sequel is going through rewrites by David Bar Katz and Todd Stashwick, who are co-writing the script alongside director GAVIN O’CONNOR (Warrior, The Accountant).

With Jared Leto’s ‘Joker’ and Margot Robbie’s ‘Harley Quinn’ getting their own films (Harley with ‘Birds Of Prey’) on the fast-track, there is no confirmation if either of them (and most of the ‘Squad’ for that matter) will return for ‘Suicide Squad 2’.

The only thing we know for sure is WILL SMITH’s ‘Deadshot’ is definitely back to take on ‘Deathstroke’. The two anti-villains is known to cross paths before in the comics to battle it out for the title of ‘World’s Greatest Assassin’.