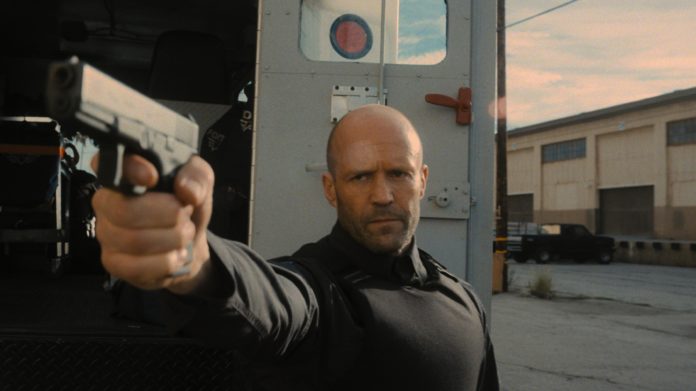 Wrath of Man marks the fourth collaboration between director Guy Ritchie and leading man Jason Statham. Both made their feature length debuts with the classic Lock Stock and Two Smoking Barrels (1998) before moving on to the acclaimed Snatch (2000).

With the two of them hitting the big leagues they decided to team up on the decisive Revolver (2005) which unlike their previous two ventures was met with poor reviews and became a failure at the box office. While it had a number of worthwhile elements it paled in comparison to their previous collaborations, with its convoluted plot being a major drawback.

Since then Statham has gone on to become arguably one of Hollywood’s most popular action stars. Ritchie on the other hand has moved slightly away from the crime genre into more blockbuster territory with the likes of Sherlock Holmes (2009), King Arthur: Legend of the Sword (2017) and Aladdin (2019).

That’s not to say Ritchie has fully left the crime genre behind, with the underrated RocknRolla (2008) and last year’s the Gentlemen (2020) being standouts in his filmography. It’s clear that whenever Ritchie focuses more on the life of crime that his films standout. This is why Wrath of Man is such an event, as not only does it see him return once again to a beloved genre but working alongside Statham for the first time in 16 years.

A remake of the French film Le Convoyeur (2004), Wrath of Man finds the mysterious H (Jason Statham) being employed by a cash truck company who are in charge of transporting millions of dollars throughout L.A. The company’s manager Terry (Eddie Marsan) has decided to up security after a series of violent robberies, one of which we are shown during the opening moments of the film.

H is partnered with Bullet (Holt McAllany) and Boy Sweat Dave (Josh Hartnett) to do the cash runs. It isn’t long before they find themselves being forced at gunpoint to hand over the money they are carrying. Unexpectedly (at least if you haven’t seen the trailer) H takes down the robbers in minutes, making it clear there is more to him than meets the eye.

While H colleague’s grow increasingly suspicious of him we begin to find out the true reason behind H’s actions and his interest in these robberies. This mystery leaves H unsure of who he can trust, leading to extremely violent consequences.

Wrath of Man is possibly Guy Ritchie’s most satisfying film since RocknRolla. Working with director of photography Alan Stewart, Ritchie gives the film a clean, straight forward no bullshit look. Gone are the visual flourishes and directorial tics of his more celebrated works and being more in the style of the hard boiled crime thrillers of the 1970’s such as Don Siegel’s Charley Varrick (1973) and The Outfit (1973).

It is an extremely bleak world Ritchie creates, with there being no place for heroes. Every character involved in Wrath of Man is morally grey, with the only thing setting Statham’s H apart from the villains is he at least has some form of a code. Even so, he is involved in some abhorrent actions during his mission.

Most people who have viewed the trailer no doubt know the purpose of H’s mission but I won’t get into that here so as not to spoil it for others. Ritchie reteams with Ivan Atkinson and Marn Davies who co wrote The Gentlemen with him, but their work here is far removed from the witty world of that film.

Other than some sarcastic one liners from Statham, there is none of the hilarious dialogue that other Ritchie films have become famous for. There is no time for fun here, with everything being played completely straight. The dialogue is totally in line with the tone that Ritchie sets.

The main plot line is similar to the original film but there are enough additions and changes here to make it seem fresh. In certain regards, Ritchie’s take on the material is even darker than the previous film.

The plot of Wrath of Man isn’t overly complicated, it is in more the way that is told, with Ritchie taking a non linear approach ala  Tarantino. This helps ratch up the tension, with the audience being filled in with other parts of the puzzle they weren’t aware of earlier. A middle section of the film is especially effective where we are introduced to some of Statham’s cohorts outside of the cash truck company who are assisting him on his mission.

During this time we are also introduced to a group of criminals who H may have to come up against in order to complete his mission. I liked how Ritchie at least made these characters seem relatable even if they are immoral, with us being shown their loyalty to each other and their family lives.

Some critics have stated that this is Guy Ritchie’s first proper full on action movie, but I would disagree with this statement as previous Ritchie films like Sherlock Holmes and The Man from U.N.C.L.E. (2015) have more action than what is here. That isn’t to say that Wrath of Man doesn’t have it’s own fair share of action scenes, just that Ritchie takes his time building up to them.

When it does arrive, the action on show is hard hitting and violent with Ritchie favouring gunplay over the more martial arts orientated action of other Statham films. The best of these scenes is the lengthy bullet strewn finale where Statham has to take on a gang of armour plated robbers almost single handedly.

Adding to the overall mood of the film is a suitably angry sounding musical score by composer Christopher Benstead, with it being a perfect accompaniment to the on screen action.

Statham fans may be slightly disappointed that he doesn’t have any lengthy one on one fight scenes but if they stick with it they will be treated to one of his most satisfying solo starring vehicles in years. As expected Statham is totally convincing as the dangerous H, proving he is a force to be reckoned with. It’s great to see him back working under Ritchie as he seems to bring out the best in him.

H is probably the most morally grey character Statham has played, as even the supposedly villainous Deckard Shaw in the Fast and the Furious franchise has turned out to be more of a misunderstood hero.

Statham is capably supported by Holt McAllanay who thankfully gets a considerable amount of screen time. Too many times I have seen this quality actor wasted in small supporting roles where he gets virtually minutes of screen time. A prime example of this is the theatrical cut of Justice League (2017), where he is totally wasted in a brief cameo.

Luckily people can see the true qualities of the actor from his recent performance in the terrific Mindhunter (2017) as well as his work here.

It was nice to see Jeffrey Donovan get a substantial role as one of the robbers although he was slightly overshadowed by an especially evil Scott Eastwood.

There is also Josh Hartnett who gives a suitably nervy performance as H’s cocky colleague who may or may not be involved in H’s investigation. Clearly Hartnett, Ritchie and Statham enjoyed working together as they have reteamed on their next movie. The once titled Five Guys (2021) will find Statham in action mode once again, working to stop the sale of a deadly weapon.

Notable smaller roles are filled out by the always dependable Eddie Marsan as the cowardly manager Terry and Andy Garcia who plays an FBI agent who knows more about what is going on than he would like people to know.

In what has so far been a disappointing year for movie releases, Wrath of Man is like a breath of fresh air. It’s almost nihilistic storytelling may be a turn off for some but for those who are open to taking a walk on the dark side will find one of the most enjoyable action thrillers of the year.