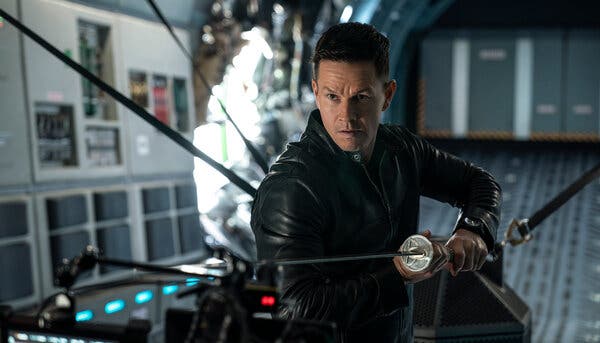 Mark Wahlberg fans would be forgiven for not realizing he has a new movie out. Unceremoniously dumped on Paramount +, fantasy actioner Infinite has come with very little in the way of fanfare with only a handful of trailers heralding its release in the past few months.

Reteaming Wahlberg with Shooter (2007) director Antoine Fuqua, it is clear that Paramount intended this to be one of their tent pole releases, which makes it all the more surprising that they have essentially dumped it onto their streaming service, a service which up until now has been known mostly for showing television content.

Initially Infinite was scheduled to be released last year but was delayed due to Covid-19. It was then rescheduled to come out later this year in September until Paramount made the surprising decision to release it on streaming.

While the ongoing Covid-19 pandemic was apparently Paramount’s reasoning behind their decision, upon viewing Infinite you realize that perhaps streaming was the best place for it, with the finished film being equal parts generic as it is incoherent.

Playing like the bastard child of Highlander (1986) and the Fast & Furious franchise, the film tells the story of Evan McCauley (Mark Wahlberg) a diagnosed schizophrenic who regularly has visions of places he has never visited. Continually self medicating to stop what he believes are hallucinations, Evan is sought out by a secret group called “The Infinites”.

The Infinites are a group made up of a selected few with the ability to be reincarnated but retain their memories and knowledge which they have gained over centuries. They believe that McCauley is himself an Infinite and must work with him to regain his memories of the past so they can stop the evil Bathurst (Chiwetel Ejiofor) from destroying all life on the planet.

Infinite marks Antoine Fuqua’s first fantasy film. A director known for more gritty fare like Training Day (2001) and The Equalizer (2014), with even his take on King Arthur (2004) removing all the fantastical elements normally associated with the tale. It comes as a surprise to see him behind a film such as Infinite.

While it still has some striking visuals, with him once again working with ace cinematographer Mauro Fiore, it is unlike the majority of his previous films. Fuqua seems to have adopted a more frenetic shooting style more in line with the likes of Michael Bay, whose work this film closely resembles.

From its opening it is clear Infinite has some problems, first of all with its exposition heavy voice over from Wahlberg. The remainder of the film only gets marginally better in terms of storytelling, with it appearing that Fuqua was more interested in kick-starting a franchise than actually telling an interesting story.

Of course, not all the blame should be lain on Fuqua, with a lot of the film’s issues stemming from Ian Shorr’s script (with rewrites from John Lee Hancock). Having never read D. Eric Maikranz’s The Reincarnationist Papers (which Infinite is based), I can’t comment on how successful an adaptation this is, but going by fan reaction online it would appear that much was changed from its transition from page to screen.

As well as Wahlberg’s unnecessary narration, the film is filled with characters spouting endless exposition, with Sophie Cookson’s Nora being the most guilty of this. Considering the majority of these characters have lived countless lives, it would maybe have been a good idea to show these through flashbacks rather than through poorly written dialogue.

Other than a few glimpses of his past lives, the only other version of McCauley’s previous incarnations shown in any length is Dylan O’Brien’s Heinrich Treadway. O’Brien is introduced during the admittedly exciting opening, a hair-raising car chase through the streets of Mexico City.

The only issue with this scene is that Fuqua doesn’t go to any lengths to establish when it takes place. The type of car O’Brien is driving suggests that it could be the 1980’s, but if this is the case we can assume that Wahlberg’s re-incarnated version is only meant to be around 30 years old.

And this is one of the biggest hurdles Infinite tries to overcome, the clear miscasting of Mark Wahlberg. As a big fan of Wahlberg, this is the first of his roles where he feels out of place. He appears uncomfortable in his role, with him showing none of the charm or humour apparent in his best action vehicles.

Personally I think the film may have worked better if it kept Dylan O’Brien as the protagonist, with him at least being closer in age to the character in Maikranz’s novel.

Perhaps part of the issue is the fact that Wahlberg wasn’t the original choice for McCauley, with Chris Evan’s initially being cast before dropping out due to scheduling difficulties with his show Defending Jacob (2020).

It must be said that Wahlberg still does his best with the role and as expected throws himself into the action scenes. When it comes to the action, it is capably done but sadly neutered due to its adherence to the PG-13 rating. While the action is well choreographed it is strangely bloodless which becomes extremely noticeable when you have characters brandishing katana’s.

Fuqua has proven in the past to be quite adept in terms of action, but there is nothing here as impressive as what he had shown in Olympus Has Fallen (2013) or The Equalizer. The inclusion of some ropey CGI also does them no favours.

It’s not all bad though with Chiwetel Ejiofor acting up a storm as the film’s big bad Bathurst. Chewing the scenery every chance he gets, Ejiofor makes up for the shortcomings of the screenplay by injecting some much needed life into his role. He also gets a chance to show off his action credentials facing off against Wahlberg during the finale.

I still don’t understand why Ejiofor hasn’t made more of a name for himself in the action genre as he has shown how much of a bad ass he can be in the past with his roles in Serenity (2005) and Redbelt (2008). It seems whenever he does get cast in an action movie it is playing third banana to the lead such as his recent role in The Old Guard (2020).

The remainder of the cast do what they can with the material they are given. The previously mentioned Cookson proves to be an engaging performer, even when saddled with endless exposition. In fact, she probably performs in more action scenes than Wahlberg with a chase scene through a forest being a standout.

The always reliable Jason Mantzoukas brightens up the third act, doing another play on his crazy weirdo characters that he has perfected in The League (2009) and Brooklyn Nine Nine (2013).

The likes of Toby Jones and Rupert Friend don’t fare so well, only appearing on screen for minutes. In regards to Friend, his appearance made me suspicious that a good deal of Infinite may have ended up on the cutting room floor. It seems strange to hire an actor as recognisable as Friend to only have him appear for 5 minutes in a wordless role.

Unfortunately I wish I could be more positive about Infinite, as I was looking forward to Fuqua making what was essentially a modern take on Highlander. Sadly this was not to be. Maybe Chad Stahelski’s upcoming Highlander remake will better scratch that itch.

Maybe Fuqua’s upcoming The Guilty (2021) will be better realized, once again teaming him with his Southpaw leading man Jake Gyllenhall. If it is half as good as the Danish original Fuqua will be on to a winner.