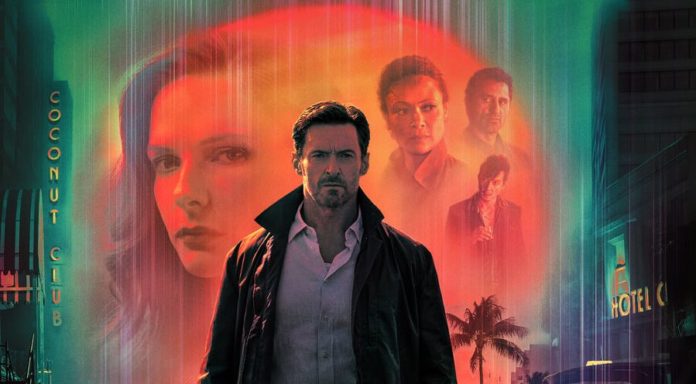 Lisa Joy makes her directorial debut with noir tinged sci-fi Reminiscence, recently released simultaneously in cinemas and on HBO Max. Probably best known for her work as a producer and writer on television series Westworld (2018), it makes perfect sense that her first full length feature would be a sci-fi.

What doesn’t make sense is what went wrong, with Reminiscence coming across as a cliche ridden detective story, made up from a hodge podge of ideas from better sci-fi films, most notably Blade Runner (1982) and Strange Days (1995).

This isn’t to say that the film is a complete failure. Handsomely produced with some excellent visuals as well as featuring strong performances from both Hugh Jackman and Thandiwe Newton, Reminiscence has enough to hold an audience’s attention, albeit one which lowers its expectations.

Set in the near future, climate change has caused the oceans to rise, flooding the city of Miami. The temperatures during the day have also forced most of Miami’s inhabitants to live at night.

Nick Bannister (Hugh Jackman), a Private Detective of the mind, who along with his partner Watts (Thandiwe Newton) run an agency which allows clients to relive their memories. One of the customers is the beautiful Mae (Rebecca Ferguson), who hires Nick and Watts to help her find her keys.

Nick is instantly smitten and by viewing her memories finds out she works as a singer at a club. The next night he visits the club to hear Mae singing his favourite song. From here Nick and Mae end up in a romantic relationship.

We quickly shoot ahead six months later, where Nick is awoken in the sensory deprivation tank he and Watts use to extract their clients’ memories. It turns out that Nick has actually been reliving his memories of Mae as she went missing months before without telling him. Nick has now made it his mission to find out what happened to Mae, a mission that is going to put him in the crossfires of the most powerful people in the city.

Working both behind the camera as well as on the script, it is clear that Joy has a love for the genre, and seems to crib from the best. The voice over by Jackman is reminiscent of Harrison Ford’s in the original cut of Blade Runner, however like that film it seems unnecessary. It’s as if the filmmakers don’t trust the audience to draw their own conclusions, with the voice over being mostly used to make it clear what is occurring on screen.

Perhaps, like Blade Runner, this voice over was put upon her by the studio, although I don’t think this is the case here as it is a tool that has been used in countless film noirs of the past, some which Joy no doubt took inspiration from.

Visually, Reminiscence is one of the better looking films of the year, with Joy working with director of photography Paul Cameron to create some striking imagery. Cameron had previously worked with Joy, having shot a number of episodes of Westworld.

Joy also brought along another carry over from Westworld, production designer Howard Cummings. His creation of a water logged Miami also adds to the overall visual effect and makes the film stand out more than any of its story elements.

From a storytelling point of view, the mystery element seems overly simple in what initially feels will be more complex. The same is true of the romantic element which is the main driving force of the film. Considering Mae is meant to be the love of Nick’s life, we aren’t exactly shown much of their relationship to guage this, other than some flashbacks.

I did enjoy the flashback structure though, with us being shown other sides of characters we thought we already knew. This is especially true of Rebecca Ferguson’s character whose scenes mostly take place in the past.

Performance wise, as mentioned the real standouts are Jackman and Newton. Jackman’s is full of seething anger and determination and I especially liked how Joy didn’t make him an out and out hero. In fact, none of the characters in Reminiscence could really be classed as heroes, with all of them having done bad things in their past.

I appreciated that Jackman wasn’t the tough guy we would normally expect, especially when comparing him to the likes of Logan/Wolverine. In fact, he actually loses most of the fights he gets involved in.

It was refreshing to see that Newton was clearly the stronger of the two. While she has her own demons, she is able to keep things together far better than Jackman’s character. Her unrequited feeling for Jackman’s Nick also gives Newton some decent material to at least show off her acting chops.

Newton’s character has some similarities with that of Angela Bassett’s in Strange Days, with her being more physically capable than our male hero, even having to rescue him on occasion.

One such rescue leads onto one of the film’s main action scenes, of which there are only really two. This one involves Newton and Jackman facing off against Daniel Wu’s bar ful of gangsters. It is well staged but lacks a sense of danger due to its overuse of slo-mo. At least it does have the welcome sight of Wu brandishing twin handguns.

The second main action scene is better handled, with Jackman and Cliff Curtis being involved in a prolonged brawl that finds the two of them going through walls and stairways to get the upper hand on each other.

I appreciated its lack of finesse in their moves. This isn’t some finely choreographed martial arts fight and is in line with the films style and characters. The end of the fight especially impresses with our characters submerged in an underwater theatre which is visually stunning.

Of the supporting cast, Rebecca Ferguson impresses as the alluring Fay, however she is ultimately wasted in a role that is beneath her talents. I did like her red dress though which put me in mind of Jessica Rabbit. If Hollywood ever thinks of making a fully live version of Who Framed Roger Rabbit (1989) they know who to call.

My Biggest disappointment overall was the sheer waste of Daniel Wu. To be honest, Wu was one of my main reasons for wanting to see Reminiscence. While I am a big fan of Jackman, I thought this would finally give Wu a worthwhile role in a Hollywood production. Sadly this isn’t the case, with his screen time being extremely brief.

Of course, he is great in the time that he has but I would have liked to see him get more involved in the main plot, as I thought he would initially be the main villain, but that role ultimately goes to Cliff Curtis. Well the main villain may be pushing it, as he is really only another stooge in the employ of the big bad, but I won’t spoil who that is.

As expected, Curtis is fine in the role, but he really could do a part like this in his sleep. This guy really deserves better roles than this.

Unfortunately Reminiscence wasn’t the winner I was hoping for, but I would still recommend sci-fi fans to at least give it a go. It is the one recent release that I would perhaps suggest watching at home, as this may allow you to appreciate the film more, as cinema going audiences may ultimately feel cheated that it isn’t the film they expected.