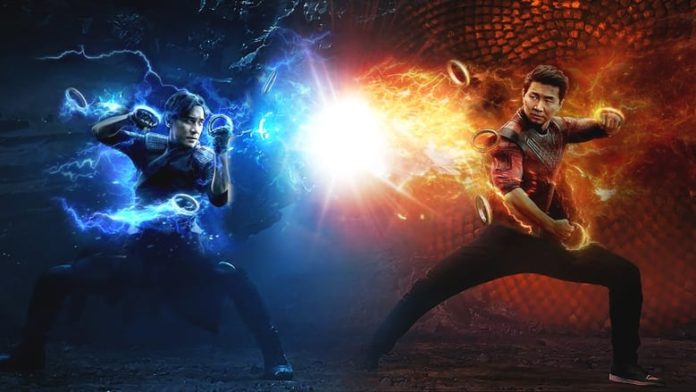 With the controversy over the handling of the Black Widow (2021) release still fresh in people’s minds, Disney have forged ahead with their second Marvel release of the year, the eagerly awaited Shang-Chi and the Legend of the Ten Rings, which smartly has focused on a cinema only release.

Featuring the first Asian lead in the MCU, Shang-Chi is a stand out amongst their solo hero offerings, with its mixture of expertly choreographed fight scenes, solid performances and state of the art CGI setting it apart from its competitors.

It certainly overshadows the earlier Black Widow in almost every department, with everything coming together to make Shang-Chi one of the most enjoyable Hollywood blockbusters of the year.

After living in hiding for over ten years, Shang-Chi (Simu Liu) has to confront his past after his father, Wenwu/The Mandarin (Tony Leung Chiu-wai), sends terrorist organization The Ten Rings after him and his sister Xu Xialing (Meng’er Zhang).

He is looking to get his hands on pendants that were given to Shang and Xu by their mother. These pendants are a key to their mothers homeland Ta Lo, which Wenwu is hoping to find in the hope he can be reunited with their deceased mother. To do so he is willing to destroy anything that gets in his way, even if it means steeping the world in darkness.

Shang comes clean to long time friend Katy (Awkwafina) of his past and the two travel to Macau to warn Xu Xialing of their father. Things don’t go according to plan, with Shang, Xu and Katy becoming prisoners of Wenwu. Now our heroes have to escape and try and stop their father from potentially destroying the world.

Director Destin Daniel Cretton does a terrific job behind the camera, especially when considering this is his first attempt at an action movie, with him previously directing more dramatic fare with the likes of The Glass Castle (2017) and Just Mercy (2019) being a couple of his best known works.

He brings his skills as a dramatic director to the table here, with him realizing the importance of showing characters that we actually care about and giving them more depth than what isn’t usually associated with action movies. Now, I’m not saying this is award worthy as some characters are given more to chew on than others but the characters that matter are all given their chance to shine.

This is especially true when it comes to the film’s handling of its villain. Many previous MCU films have seriously faltered when it comes to the portrayal of its villains. Even when they cast top class talent to play them, they still manage to short change the audience. The most recent culprit was Ray Winstone in Black Widow. A competent enough actor, Winstone was handcuffed with possibly the most forgettable MCU bad guy to date.

Thankfully Cretton, along with script writers Dave Callaham and Andrew Lanham, realize the importance of having a well developed villain for our heroes to face off against. The Mandarin is definitely one of the best MCU villains to feature to date, with him being shown as morally complex and somewhat conflicted in his mission.

It helps that the Mandarin is portrayed by movie great Tony Leung Chiu-wai, giving the production a level of class that other blockbusters seriously lack. Leung gives an emotional performance, with the grief of losing his wife being his main driving force, and being blind to the suffering he causes in order to achieve his goals.

Some of his best scenes are during a flashback where it shows his attempts to give up his life of violence and live as a family man. His despair at his realization of how he can never live a normal life is beautifully shown by the actor.

Having worked in the Hong Kong film industry, it is obvious Leung is no stranger to action movies having starred in some of the best the region has to offer, most notably Bullet in the Head (1990) and Hard Boiled (1992). However, unlike a number of Hong Kong film stars, he is not primarily a martial artist. Still, he has appeared in his fair share of martial arts movies throughout the years, the likes of Butterfly and Sword (1993) and Ashes of Time (1994) being standouts.

He also headlined another take on the Ip Man legend in Wong Kar-wai’s masterful The Grandmaster (2013), which probably gave the actor his most martial arts heavy role to date. Now, his fight scenes in Shang-Chi aren’t as elaborate as those he took part in during The Grandmaster, with him no doubt being stunt doubled during the more difficult routines, but he still manages to come across as a fearsome opponent.

Considering Leung’s career is now in its 4th decade, it is amazing that Shang-Chi marks Leung’s Hollywood debut. Hopefully his work here will lead to more international roles in the future.

Acting wise, Leung definitely shines above the rest of the cast, but this isn’t to say that the other performances don’t put in noteworthy performances. Simu Liu definitely shines in the lead role of Shang-Chi, being instantly likeable and showing off his considerable physical skills. He also gets to show the characters emotional side with the realization that he has to face off against his own father which may mean he will have to take his life.

With only a handful of movie roles to his credit, Liu is probably best known for his work on the sitcom Kim’s Convenience (2016). Having never watched the show, this was really my main introduction to the actor and I must say I was impressed. While it is clear Marvel have further plans for him going forward, his role should also hopefully lead to higher profile work out with the MCU.

One of the most enjoyable aspects of the film is the relationship Liu has with Awkwafina’s Katy. She turns what could have been an annoying sidekick role into an endearing character that is willing to do anything to support her friend, putting herself in harm’s way numerous times. Even though she is primarily comic relief, Awkwafina still manages to get involved in some of the action during the finale.

There is a strong female presence in Shang-Chi throughout. As well as Awkwafina we have Meng’er Zhang making her movie debut. Kicking all types of ass, she takes part in a handful of the films fight scenes, even getting to go up against Andy Le’s Death Dealer, although I would have liked the scene to be longer.

Best of all is a third act appearance from martial arts movie legend Michelle Yeoh, being as majestic as usual. I was slightly disappointed by the use of some stunt doubling during her fight scenes, especially when it appeared she had done all her own moves in Master Z (2019) only a couple of years previously. Still, any appearance from Yeoh is appreciated and at least the doubling was well integrated and not obtrusive.

Lesser roles are filled out by the likes of the previously mentioned Andy Le, whose martial arts skills are so impressive you will wish there was more of him. For anyone unaware of Le’s talents they should look up his work with Martial Club to get a taste of what he and his colleagues are capable of.

Martial arts movie fans should get excited by a late appearance from Hong Kong movie great Yuen Wah. Even though he doesn’t really take part in any martial arts action, just his appearance alone made this fan very happy.

Additionally, there is a returning actor from a previous MCU adventure but I don’t want to spoil that here. Lets just say their role is perfectly realized and is one of the films funniest inclusions.

As mentioned before, Shang-Chi is director Destin Daniel Cretton’s first attempt at an action movie. The action is given a great Hong Kong movie flavour, which is to do with Cretton smartly hiring the late Brad Allan to carry out the action choreography. One of the best in the business, Shang-Chi marks one of Allan’s last films before his untimely death at the age of only 48.

Allan was famously the first non-Asian to become a member of the Jackie Chan Stunt Team. He brings everything he learned from there and imbues it into Shang-Chi’s excellent fight scenes. The most impressive of these is a scaffolding based fight scene where Liu’s Shang Chi takes on countless members of the Ten Rings. It was somewhat reminiscent of his fellow fight choreographer Xin Xin Xiong’s work on The Great Challenge (2004) but ramped up to 11.

Allan wasn’t the only Jackie Chan Stunt Team member to work behind the scenes, with Andy Cheng also being on board to help choreograph the action. Their work here certainly sets Shang-Chi apart from other MCU film’s and is certainly a leap forward for the franchise in terms of fight choreography.

Although Shang-Chi is currently only showing in cinemas, Disney has made the decision to release to streaming platforms within 45 days of its release. This is good for those still uncomfortable in attending screening but I would urge anyone to see Shang-Chi on the largest screen available.

Not only is Shang-Chi one of the best Hollywood blockbusters of the year, it is up there with one of the MCU’s most enjoyable features to date. It does slightly derail itself during the finale where it descends into a CGI reliant monster battle, but by then you will be so transfixed you will hardly notice.