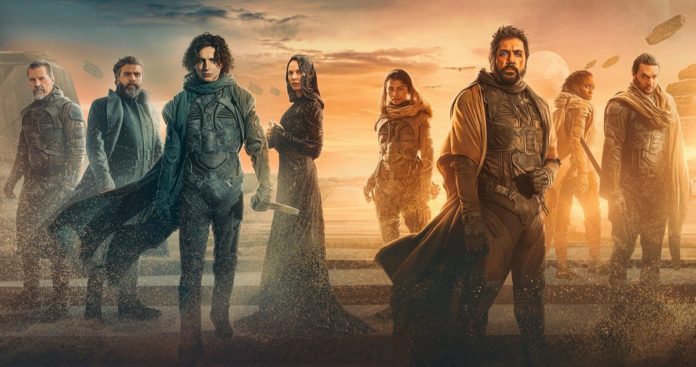 Having been delayed for almost a year I think it’s safe to say that Denis Villeneuve’s Dune is one of the most anticipated films of the year. For a while it was uncertain if it would see a cinema release with the majority of Warner Brothers’ releases forgoing theatrical release due to Covid-19 restrictions, instead going straight to streaming service HBO Max.

Thankfully with restrictions somewhat easing a cinema release is possible, although it has been a simultaneous release with HBO Max like all recent Warner Brothers films much to the disappointment of Villeneuve who seems to think the only way to appreciate his movie is on the big screen. In some regards I would have to agree as this is filmmaking on a grand scale, with all the money being on the screen.

However, Dune isn’t the triumph in cinema that I was hoping for. Villeneuve has made a visually stunning film but in his attempts to bring the world of Frank Herbert’s literary classic to the screen he has made an extremely dry sci-fi epic that personally left me cold.

Dune focuses on the story of Paul Atreides (Timothée Chalamet), as he and his family, the House of Atreides, have to travel to the far away desert planet of Arrakis, the only source of the priceless substance “Spice” Melange. This spice is not only recognized for extending human vitality but is critical for space travel.

Upon arrival in Arrakis Paul and his family are thrust into a civil war between the indigenous Fremen and the former rulers of the planet, the House of Harkonnen. Paul will be tested far beyond his capabilities and forced to conquer his own fears in order to not only defeat the House of Harkonnen but fulfill a years old prophecy.

Villeneuve’s version marks the third filmed adaptation of the material. Much has been made of the failing of Lynch’s 1982 take on the material although it must be said that it definitely has its pleasures. While it had to seriously congest the plotline it had some great performances coupled with excellent production design.

There was also the Sci-Fi Channel’s 2000 mini series which was able to be more faithful to the source material which brought about its own issues with the series being dragged down by countless scenes of exposition.

It was hoped that Villeneuve’s vision would overcome such problems, but while his take certainly has the grand spectacle one would expect it still feels bogged down in exposition with a great deal of the running time being given to world building.

While it is important to give the audience time to get to know the characters and setting, after an hour of countless meetings and political discussions proceedings begin to drag, with Dune having some serious pacing issues that I didn’t feel it overcome.

After over an hour we are finally treated to some action with the Harkonnen army attack on Arrakeen. Suitably large scale and visually impressive it still failed to generate any sense of excitement. It is well choreographed but as the majority of the characters in the film are either solemn or lacking in personality I really struggled to care what happened.

Some credit must be given to Hans Zimmer’s great score which at least does work hard at trying to set the pulses raging during the action even if other elements in the film worked against it.

Of course, having read the novel I knew the outcome of the battle which perhaps could have played into this but I have been able to garner excitement from other literary adaptations where I have known the eventual outcome.

Admittedly, the emotionally distant characters and exposition heavy storytelling isn’t merely down to Villeneuve, with it being somewhat characteristic with Herbert’s mammoth novel, however the novel was able to overcome this as it was able to delve deeper into its settings and characters as it progressed. Villeneuve and his fellow scriptwriters Jon Spaihts and Eric Roth should at least be given credit for attempting to adapt Dune for the screen but they never delve deep enough into the characters personalities and motivations other than on a superficial level.

Villeneuve has brought together a talented cast that at least manage to inject some personality into their characters, which is more to do with the performers than anything from the script. Timothée Chalamet does well as the conflicted Paul Atredies. While he initially doesn’t come across as the great hero he is destined to be, this is clearly intentional with his slight frame and demeanor working against him. You really feel that he is out of his depth.

The likes of Oscar Issac, Josh Brolin and Rebecca Ferguson equally do good work with Ferguson probably faring the best, being suitably distraught at what is happening around her.

Faring the best out of the supporting cast is Jason Momoa, whose Duncan Idaho is the only character in the film that shows a sense of humour or whose personality doesn’t come off as depressive. Fans of Momoa’s more action focused work shouldn’t be disappointed with him featuring strongly when the action finally comes.

There are some actors sadly wasted with limited screen time, with the likes of Javier Bardem and Dave Bautista only appearing fleetingly. The same is true of Zendaya who, going by the trailer, seemed like she would be a major player to only have what amounts to roughly 15 minutes screen time. Of course it is obvious in the event of a sequel these actors will all feature prominently.

Villeneuve also expects a lot of patience from his audience, with Dune essentially being a 2.5 hour teaser for the main event. It is clear from the opening credits where the title card exclaims this to be part 1 that we aren’t getting the full story, with the film coming to its conclusion at roughly the novel’s halfway point.

I don’t mind that Villenueve has chosen to go down this route to tell the story, as splitting the novel in two is better than trying to cram everything into one complete movie. Just watch Lynch’s version to see what problems this may cause.

As witnessed with previous attempts to bring the epic tome to the screen, it is a near impossible task to do it justice with a feature length running time, with even the mini series almost 300 minutes still not being enough, so the decision on paper to split the film in two parts is a sound one.

My only issue with the story being split is that Villeneuve’s film doesn’t build to a natural climax. In fact, casual moviegoers may even be surprised this is the finale as it feels as if we are about to move onto another scene only to be treated to the end credits.

Of course I am expecting some will disagree with my opinion as Dune has already been heralded as a masterpiece by certain critics. It is true that I have given lesser productions more credit than what I am giving here, but those productions don’t come with the expectations of Dune.

As other critics have heralded the movie as a masterpiece, some may think I don’t have the mental capacity for something like Dune, preferring more action orientated sci-fi but this isn’t the case. I loved Villeneuve’s last Sci-fi outing, Blade Runner 2049 (2017), with it being one of those rare sequels that was equal if not surpassing the original in terms of quality.

I have also greatly admired Villeneuve’s other work such as Prisoners (2013) and Sicario (2015) which both showed his considerable talent behind the camera. Sadly I felt that while Dune certainly lived up to, if not surpassing them on a technical level, it was seriously lacking in other areas to proudly feature alongside his previous work.

Many fans of the novel have recently stated that to really appreciate Dune you should have knowledge of the novel, this way it can help fill in the blanks. I totally disagree. This isn’t how a film should really work. Surely one should be able to go into a film blind of the source material and still be able to understand and enjoy the story being told on screen. If not then the filmmakers weren’t doing their job.

Although I was disappointed by the completed film, there is still a lot to appreciate in Dune and I hope that it is enough of a success for Villeneuve to get his planned sequel off the ground. Perhaps with the second part complete I can better appreciate part one, as at the moment it just feels incomplete.