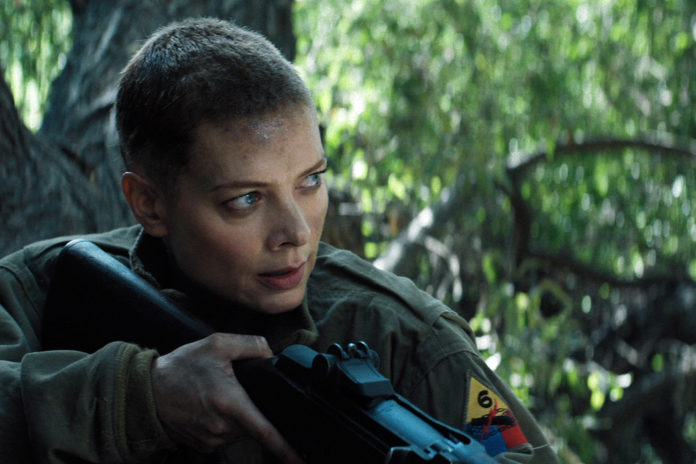 With his back catalogue being made up mostly of modern day set actioners, director Jesse V. Johnson has gone back in time for his latest, the WWII set Hell Hath No Fury. More in line with the classic Dirty Dozen (1967) than Saving Private Ryan (1998), Hell Hath No Fury has everything we have come to expect from Johnson with extremely well executed action scenes and excellent performances from his cast.

Unlike the majority of his other releases, Hell Hath No Fury has the distinction of being given a cinema release thanks to distributor Well Go USA, with it coming November 5, 2021. Another factor that makes it a standout amongst his filmography is that this is the first of his films to feature a female lead, with the focus of the plot being around French Resistance member Marie DuJardin (Nina Bergman).

Branded a traitor by her countrymen over her apparent relationship with Nazi Officer Von Bruckner (Daniel Bernhardt), Marie is saved by execution from a crew of American soldiers led by Major Maitland (Louis Mandylor). Their sole reason for saving her isn’t born out of chivalry but more to do with Marie promising to lead them to a cache of hidden gold.

With a group of German soldiers also hunting for the gold, Marie will have to use all her wits and guile if she is to survive.

Like a lot of Jesse V. Johnson’s work, Hell Hath No Fury is a low budget affair. Made for a reputed $5 million, Johnson is able to stretch what wouldn’t even be the catering bill for some bid budget features to make sure that every cent is on the screen.

One of Johnson’s many skills is never overextending his reach. I have lost count of the amount of DTV movies I have viewed where they have tried to include action scenes they clearly didn’t have the budget for, resulting in extremely mediocre results. For example, how many low budget action movies have you seen that have included car chases where the cars move at 20mph clearly because the production couldn’t reach to hiring quality stunt drivers. It’s simple, If you can’t pull it off, don’t include it.

Johnson thankfully doesn’t fall into these traps, with him focusing more on the type of action he knows he can pull off with what resources he has available. What this amounts to is a handful of extremely violent shootouts with Johnson typically favouring practical effects work over the sub-par digital effects that usually plague so many DTV efforts.

Other than a handful of flashbacks, the main body of the film is set in the confines of an old run-down cemetery. While the action takes place in mostly one setting, Johnson makes sure that the film doesn’t feel overly claustrophobic, with him taking full advantage of all the nooks and crannies of the cemetery with him even going under it on occasion.

While not his most impressive film in terms of action, Johnson keeps things viscerally exciting. It helps that Johnson brought on regular collaborator Luke LaFontaine to choreograph the carnage, having worked with him on the likes of Savage Dog (2017) and The Debt Collector (2018). Of course, the action isn’t on the scale of those, or even the similarly small-scale Avengement (2019), but it still manages to impress in its own brutal fashion. Like some of his other work with Johnson, LaFontaine also appears in front of the camera, getting a considerable amount of screen time in comparison to previous roles.

Typically of Johnson’s work he gets good performances from his cast. Other than the recent The Mercenary (2019), the majority of his work of late has featured martial arts superstar Scott Adkins. Whilst he doesn’t appear this time round Johnson still fills the screen with an assortment of his regular on screen collaborators including Dominiquie Vandenberg and Louis Mandylor.

The lead role however goes to Nina Bergman, who I must admit I wasn’t instantly aware of. Upon checking I realized that I had previously seen her in the DTV sequel Doom: Annihilation (2019) which coincidentally also featured Louis Mandylor. She also made a small appearance in Johnson’s earlier The Beautiful Ones (2017).

While those roles didn’t exactly put her on the map, I feel her work in Hell Hath No Fury will change that, with her giving a fully dedicated performance. Her character of Marie is certainly put through the ringer, with her male co-stars being anything but courteous. Bergman spends the majority of the film in her underwear being either threatened or beaten, with her biding her time before she can turn the tables on her captors.

You can see the fear and determination in Bergman’s face throughout and you will want to see her triumph. She isn’t a clear cut action hero, taking part in less gunplay than her male co-stars. This is more to do with how the story develops than being a woman, with her finally getting involved more towards the finale.

Although the plot is built around Bergman’s Marie, in some respects Hell Hath No Fury feels more like an ensemble piece, with all of the main cast getting their chance to shine. This might just be my favourite performance yet from Dominiquie Vandenberg which is very much removed from the more stoic hero of The Mercenary. He plays his part suitably deranged, with him constantly seeing apparitions of his dead friend who seemingly gives him words of advice.

Fans of Vandenberg’s skills may be disappointed by his lack of fight scenes, but this isn’t really that type of film. What he does get to show is a range of emotion that isn’t typical of his typical roles which made his work here something of a standout.

Speaking of martial arts, Hell Hath No Fury also features fan favourite Daniel Bernhardt who like Vandenberg appears in a purely dramatic role. That isn’t to say he or Vandenberg don’t get involved in any of the film’s action, just that it isn’t of the fighting variety. Bernhardt makes for a well rounded villain. He genuinely seems to care for Marie and even after what has happened between them, appears to be conflicted with what he has to do.

There is also the charismatic Timothy V. Murphy, whose character is probably the least likeable of the squad. Looking like a more craggy faced Michael Fassbender, Murphy at least makes his character appear more than what he initially appears to be. I was even rooting for him during the bullet strewn finale, something I didn’t think would happen upon his introduction.

Typical of many Johnson films, the best performance is given by Louis Mandylor who is terrific as the battle-worn Major Maitland. His character has clearly seen too much and just wants a way out. Maitland does some despicable things to Marie during the course of the film but Mandylor makes his character somewhat relatable with him seemingly recognizing he is doing wrong but knows there’s no turning back. His scenes alongside Bergman are some of the films best with the two sharing an interesting dynamic.

Assisting in setting the overall tone is a well done score by Johnson’s regular composer Sean Murray. Not on the same level as his work on Avengement (2019), it is still impressive work from someone that really should be working on higher profile features by now.

Made for a reported $5 million, Hell Hath No Fury is further proof of the quality work Jesse V. Johnson can churn out with limited resources and the perfect tonic for the overblown blockbusters that have been coming out of Hollywood this year.